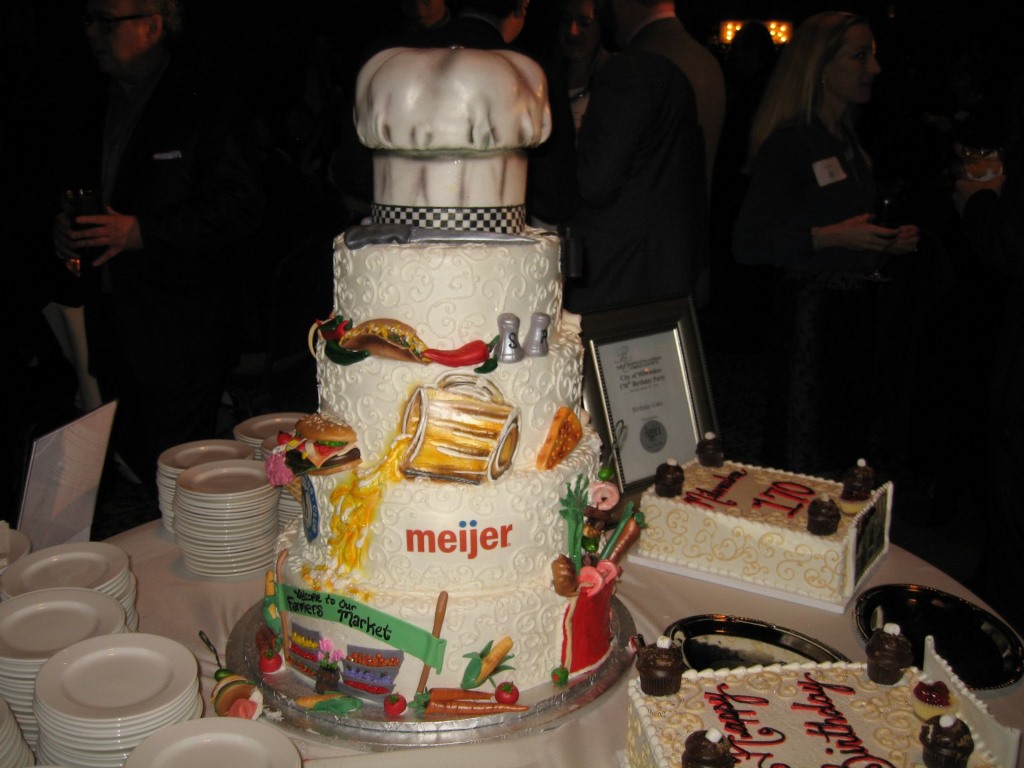 The 170th anniversary of the chartering of the municipal corporation known as the City of Milwaukee was celebrated two days early on Thursday, January 29th at the Grain Exchange Room of the under-renovation Mackie Building, 225 E. Michigan St.

The Second Empire architectural masterpiece of Edward Townsend Mix has been supplying the city with property tax revenue for the past 137 years, so it was a fitting location for the celebration.

The hostess was LaToya Dennis, a WUWM reporter/producer and President of the Milwaukee Press Club, the sponsor of the annual celebration.

In brief remarks, she thanked the 400 “business leaders, elected officials and news makers” who were in attendance. They included such city officials as the Mayor and the Police Chief, along with the City Treasurer, the Commissioner of Public Works, and aldermen from the 3rd, 4th and 13th Districts, in addition to their boss, the Common Council President.

There! Got them all in and didn’t mention a single name.

Ms Dennis announced that the theme of the evening was “Savoring our City,” in what she called “a celebration of Milwaukee’s culinary scene.”

The culinary celebration was not reflected within the room itself, where the Bartolotta catering folks put out sausages and cold cuts (donated by Usinger’s), some crackers and a couple desultory steam trays of a breaded pork and spaetzle noodles. If there was any cheese, I missed it.

Anyway, the Press Club had an online contest asking for “foodie favorites,” Dennis said, adding, “More on that in a minute, but first … a big thanks to our sponsors.”

The lead presenting sponsor once again was Potawatomi Hotel & Casino, and Tom Malloy, the Assistant General Manager and Chief Marketing Officer of the gambling venue made brief remarks.

The prominence of the casino in the economy of our community was noted, and its benevolence toward local charities and good causes like this event was duly acknowledged.

This brought to mind the words of Solomon Juneau, the first mayor of Milwaukee, in his inaugural address given Friday, April 16th, 1846.  Upon taking his oath on that fateful May day 170 years ago, Juneau addressed the members of the first Common Council and cautioned them:

“nothing in your power should be wanting to secure the youth of the city from the wiles and devices of the gambler.”

No gambler, Juneau declared in his inaugural remarks, should “range our streets unwhipt of justice.”

It should be noted that from the first the city’s mayors have used ghostwriters. Juneau’s inaugural address was written by Horatio N. Wells, and Juneau probably sounded nothing like it in real life, as English was his second language. Originally from Vermont, Wells was an attorney, office holder, one-time publisher of the Milwaukee Sentinel and Milwaukee’s second mayor.

Of course, Juneau came from a simpler era, and little could he know that 170 years after he declared his anti-gambling platform the Potawatomi Bingo Casino and Hotel would become the “Largest Entertainment Destination in the Midwest.”

Today the tribal organization is one of the 25 largest employers in Juneau’s city, and a major donor to political campaigns, including those of Mayor Tom Barrett when he ran for congress, governor and mayor.

So, when LaToya called the mayor to the podium, he didn’t mention the evils of gambling, or any divisive matter, but gave a good, heartfelt cheer to the community and those in attendance.

Earlier in the procedings, after a number of minor sponsors were acknowledged, it was time to introduce the winners of the culinary competition. Kyle Cherek was chosen to make the remarks, and he noted that one of his relatives worked on the restoration of the Grain Exchange Building as a first job in America.

He also pointed out that Milwaukee was “the Midwest’s pre-eminent port city of the mid-19th century; we grew and milled our wheat for the rest of the country, and this very room is a testament to that history. Our grain was traded on this very floor.

“Today’s restaurant scene is more vibrant than ever. Our ingredients come from the finest nearby farmlands and our chefs are regularly recognized nationally and internationally. To celebrate that, we asked for nominations in six different categories, then put them up for a vote.”

Michael Feker and Il Mito took co-honors for best food champion, top restaurant and best chef, eliciting a comment from stage about the skills that some possess with their social media networks. Joe Bartolotta, Kil@wat and Aaron Miles of the Intercontinental Hotel also received honors in these categories. Milwaukee County Winter Farmers Market and West Allis Farmers Markets were selected as the best in the category of farmer’s market, Russ Klisch of Lakefront Brewery took the honors for best brewer, with second-place finisher Sprecher, and Purple Door Ice Cream, which Cherek called “the best ice cream on earth,” won for best Gourmet Goods, with Rocket Baby Bakery also acknowledged.

Attendees included Joe Bartolotta, who also catered the event, H. Carl Mueller and his staff from Mueller Communications, and Craig Peterson, whose Buffalo Water Beer was offered free to attendees, along with two Miller products. I’m sure Russ Klisch would have brought some beer if somebody had asked him.  Wine was $6. Attendees included Dieter Wegner, who recently bought the old Felipe’s Place at the northeast corner of S. 6th St. and W. National Ave., and is actively renovating it at this time. He was accompanied by Clive Promhows, who has made a good career from his Walker’s Point Live Artists Studio by painting portraits of British rock legends to adorn walls of Milwaukee bars, most recently Sabbatic. Patti Keating Kahn and Chuck Kahn for once spent time in a building even older than the two they own downtown — The Railway Exchange Building by William LeBaron Jenney, the “Father of the Skyscraper,” and the Colby Abbot Building, the headquarters of Urban Milwaukee.

Patti says work is proceeding on the sensitive process of refitting the Karl Ratzsch’s restaurant in the Colby Abbot under its new owner, Thomas Hauck of c.1880. That is the sort of ornate interior you renovate with Q-Tips and feather dusters, not with sledgehammers.

As Russ Klisch took the podium to claim his award, his wife May snapped photographs to share of the event. Pat Curley, the mayor’s chief of staff attended the event, and the mayor was accompanied by his wife Kris, who has attended these events in the past.

Chief Ed Flynn attended in full uniform this year. A couple of years ago he was dressed in his civilian clothes, but this time he was solid brass. Meanwhile, during the shift, his forces had to deal with bizarre criminal misdeeds that are sapping their resources, even as new recruits come on board. These include a recent fashion for teenagers to commandeer occupied vehicles.

Earlier, the Chief and the mayor welcomed the 32 graduates of Milwaukee Police Department Recruit Class 1-2015 who graduated from the academy that day.

Ald. Nik Kovac and his wife Grace Fuhr were also in the audience, and they chatted with friends and passersby. Julilly Kohler swept into the event, and chatted things up with Ghassan Korban, the commissioner of public works, and later had a few words with the mayor. The Brady Street neighborhood is undergoing some changes and is entering a phase only dimly imagined three decades or so ago. At last, attention is being drawn to the west end of the street, where it terminates at the river near the Holton Viaduct and the internationally significant pedestrian Marsupial Bridge that Kohler conceived and championed.

Brandy Bond, a candidate for the 16th Assembly District, handed out her cards. She will run as a Democrat against Democrat incumbent Leon Young, now in this 10th term in the assembly, so that should spark things up a bit.

Mandela Barnes was also among those at the event. The 29-year old 11th District Representative to the Assembly is in his second term In Madison and is a vocal critic of what he calls Republican “cronyism and corruption.” Barnes has a website photograph showing grade school kids in the State Capitol for a civics field trip. But any booklet they are given describing how a bill becomes a law should be considered strictly fantasy, considering the way things operate in Madison these days.

Another fledgling political candidate was Verona Swanigan, who hopes to unseat District Attorney John Chisholm in the Democratic primary in August. Monique Kelly, who hopes to defeat Ald. Bob Bauman in the 4th District primary was also in the audience, with Craig Peterson, who is supporting both candidacies despite his general affiliation with the Republican party.

The cake having been cut, the revelers headed down to the lobby where they were gifted with bright red grocery sacks from Meijer’s, bearing a plastic measuring cup (handy for use in the laundry, less so in the kitchen), trail mix, a spatula and a box of cookies. The press club also sprang for wine bottle stoppers customized with its logo.

James Madlom of Mueller Communications and Journal Sentinel assistant editor James B. Nelson made their way down to the Swingin’ Door below and had a nice hearty meal that had been denied them above. 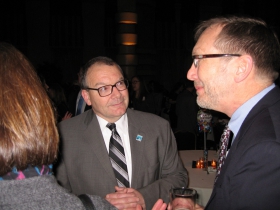 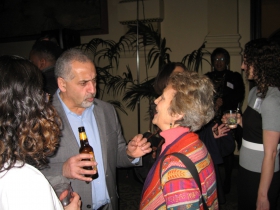 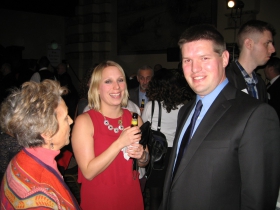 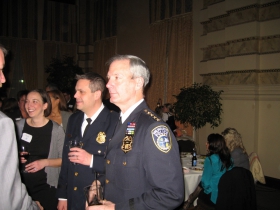 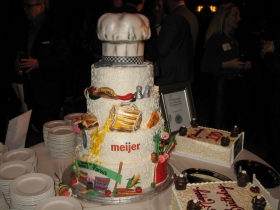 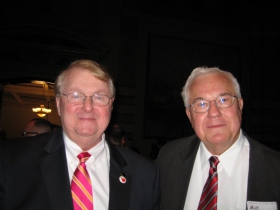 One thought on “Plenty of Horne: City Birthday Party All About Dining”