And Carnevor, Ruyi and Screaming Tuna will have new menus. 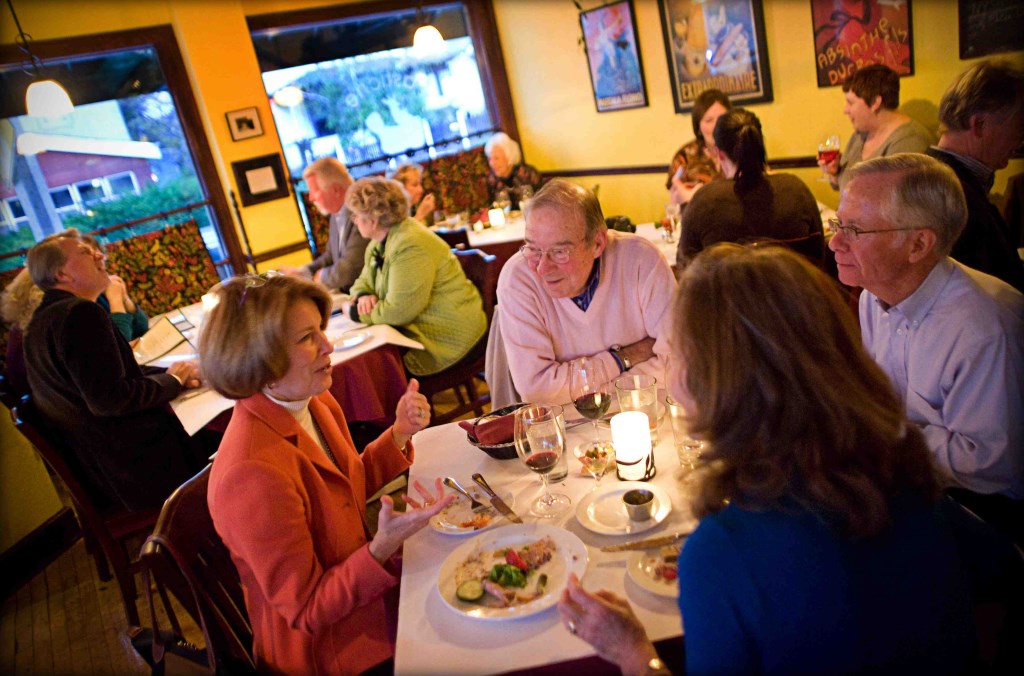 Does this mean Bay View will become a French food desert?

Popular French restaurant Pastiche Bistro and Wine Bar is closing its location at 3001 S. Kinnickinnic Ave. in Bay View and moving to an undisclosed location in Downtown.

Owner Mike Engel told the Milwaukee Journal Sentinel he is making the move because the restaurant needs more space. He said that diners sometimes need to book tables two or three weeks in advance at the current location. The new location will seat 120 to 130 diners compared to the 48 it seats at the Bay View location. The bar area will also be doubling in size.

In addition, the new locations will be more convenient for downtown employees. Engel said that when the restaurant served lunch for its first two years in Bay View, a lot of the patrons drove there from downtown.

The new location will open in September. Engel also expects there to be a month-long lag between the opening of the new location and the closing of the old one. But the menu shouldn’t change much.

Pastiche is also in the process of establishing a second location at 4313 W. River Ln. in Brown deer, the location of the now closed River Lane Inn which Engel purchased, as we reported.

We last covered Carnevor Steakhouse Moderne back in August when they were moving from their location on 724 N. Milwaukee St. to 718 N. Milwaukee St., where the SURG Restaurant Group’s now-defunct Umami Moto was located. According to OnMilwaukee, Carnevor is set to open in the new location at the end of January, and with a brand new menu to go along with the remodeling. Meanwhile, Carnevor will continue to operate at the current location until the new digs are ready.

Carnevor’s new menu will be sticking to the same well-cooked wet and dry prime cuts of meat and domestic and imported Wagyu beef that built the business for 10 years. They will also continue to acquire meats from a fifth generation USDA beef supplier known as Allen Brothers. Their time-tested cooking method, involving placing steaks under an infrared broiler, is also here to stay.

But the restaurant will now have a selection of meats from Hidden Creek Farms in New London. New items include bone-in short rib served with soft Italian polenta seasoned with herbs and Parmesan cheese along side roasted root vegetables and smoked cippolini onions. Also coming is a pork belly appetizer, which was already showcased at the old location, with thick slices of pork belly cured with maple sugar and served with braised collard greens finished with vinegar and maple qastrique.

Recently promoted Executive Chef Mario Giuliani told the publication that seafood options are being considered for the new menu. He also said there will be specials “like an appetizer featuring langoustines [(a kind of lobster)]” as well as at least one beef and one seafood special daily.

Pastry Chef Jaceleen Latin-Monagle designed the dessert menu, which includes a ricotta cheesecake with balsamic strawberries, “a new turtle flavored dessert,” a “shareable caramel apple dessert” and a chocolate trio with white, milk and dark chocolate crémeux made with Opalys, Tanariva and Majari chocolate combined with complimentary flavors including hazelnuts, cocoa nibs and fruit. In addition, there will be a recently debuted, shareable chocolate layer cake with six alternating layers of chocolate sponge and chocolate mousse assembled like a French entremets. Yummy.

Screaming Tuna Sushi invites you to enjoy #SushiWithAView on New Year’s Eve, according to a post on their Twitter page. Executive Chef Jason Morimoto is offering an “original $50 three course menu option” complete with “complimentary bubbly.” They are also offering half off all drinks from 10 p.m. until 1 a.m. And of course, they have a complimentary champagne toast at midnight. Call (414) 763-1637 to make a reservation.

Speaking of Asian food, the Asian fusion restaurant known as RuYi at Potawatomi Hotel & Casino is getting an extended menu along with 20 extra seats, according to the Milwaukee Business Journal. The new menu and expanded seating will debut on March 1st.

The soup menu is also getting an expansion with options such as pork or chicken tonkatsu ramen ($15) and miso or shiitake soup (by the cup or bowl for $4 or $8). Also available is a sashimi bowl with salmon, tuna, escolar, scallops, salmon roe and tamago ($21), a BBQ unagi (freshwater eel) bowl with eel sauce ($18) and bun thit nuong with vermicelli noodles, vegetables, shrimp and pork ($15). Joining the salad menu is a seaweed salad with agar and sesame ($7), chicken and cashew salad ($12), crispy salmon skin with yuzu vinaigrette ($8) and nori (seaweed) seafood salad with a variety of fish and fruits with grapefruit vinaigrette ($16).

You can select among salmon, red snapper, fluke, scallops, surf clam, fresh water eel, octopus, halibut, tuna and more for nigari and sashimi ($5-$10). Specialty roles include the dragon and caterpillar rolls along with the RuYi roll with spicy salmon, tuna, tempura crunch and avocado ($19) and the Firekeeper roll with salmon, yellowtail, jalapeno and avocado ($18).

The beverage options are also seeing an upgrade with a new sake program and Japanese whiskey. Omakase (a series of dishes selected by the chef) is available for reservation for $80 per person.

Asian Specialty Chef and founding chef of RuYi, Tony Ho, will oversee the opening of the sushi bar while nine-year veteran chef My Ong Vang will oversee daily operations of the restaurant.

The restaurant will be closed from Feb. 1st through the 7th for renovations and will have a limited menu all through January. The full menu will return on Feb. 8th for the celebration of the Chinese New Year.

James Beard Award winner for Best Chef Midwest Gerard Craft is preparing a multicourse dinner with chef Justin Carlisle at Ardent on Jan. 10th, as reported by the Journal Sentinel. They are joined by Nate Hereford, executive chef at Niche restaurant in St. Louis where Craft worked. This is another of  Ardent’s continuing collaborations with chefs around the country.

Aspiring brewers are in luck, for a program from The Crafter Space will give students the opportunity to learn the ins and outs of brewing beer with brewing experts.

The Barley to Barrel program consists of ten weeks of learning the brewing, marketing, sales and distribution, field testing, packaging, pitching and, of course, sampling of beer. Concluding the program is a release party where participants give a five-minute pitch of their own brewing brand to potential investors and guests can sample the one specialty brewed beer from the program with proceeds of the event going to charity. The beer will also launch in limited quantities to area bars and restaurants.

The program starts on Feb. 2nd and ends on April 8th. It is $499 per person and includes the 10-week program, exclusive access to mentorship network, hands on brew day, exclusive access to investor pitch event, program hat and shirt, exclusive beer tastings, brewery launch tool kit and two tickets for the launch event. For more information and to apply, head to the website.

Chef Gil Petrovic of Engine Company No. 3, located at 217 W. National Ave. in Walker’s Point, is hosting a seven-course dinner with wine pairings on January 17th starting at 6 p.m.

The dinner benefits his 10-month old niece, Valerie O’Gorman, who was diagnosed with optic chiasm glioma, an inoperable, cancerous brain tumor located on her optic nerve. While the tumor’s growth is slow and likely won’t spread, she is undergoing chemotherapy for a year and a half. It is expected that she will have to maintain treatment for the rest of her life and likely lose some or all of her vision.

The proceeds of the dinner will go to O’Gorman’s treatment fund as well as a donation made in her name to the American Brain Tumor Association. The dinner will start with cocktails with dinner to follow at 6:30 p.m. Various chefs will each make one of the seven courses from a culture that inspires them. A silent auction is also being held with items donated from many Milwaukee-area restaurants and businesses.

To purchase tickets and see the full menu, go to the Eventbrite page. Tickets are $101.22 per person. Those who cannot make the event or want to contribute more can visit O’Gorman’s GoFundMe page.