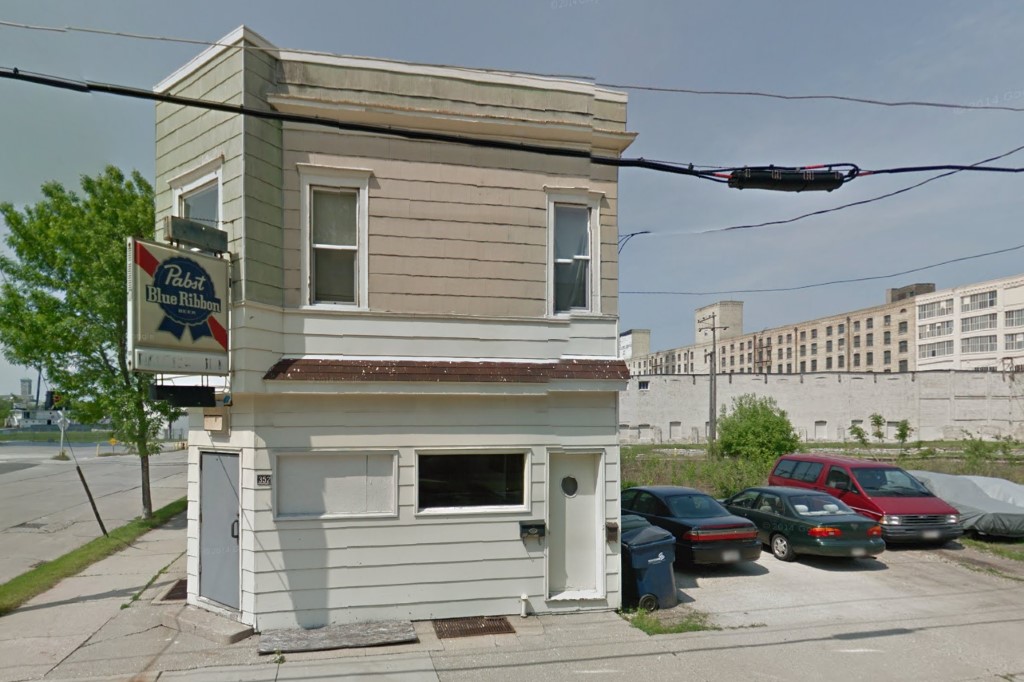 The Bay View restaurant scene just keeps improving. The latest news is that a new Italian restaurant called Santino’s could be coming, to that once deserted area near Barnacle Bud’s and at the northern edge of  Bay View. As the Journal Sentinel has reported, Santo Galati has filed an application with the city’s Board of Zoning Appeals to open the restaurant, which he has described as an “Italian-style restaurant/bar reminiscent of 1920s Brooklyn,” at 352 E. Stewart St. at S. Hilbert St. This is a long vacant building whose last occupant had been the bar, the Nautical Inn.

Galati told the newspaper he wants to install a wood-burning oven for pizzas and other dishes, and use his late mother’s recipes for many menu items. He also said he will try his best to restore the century-old building. But he’ll have to install a new bar as the old one was removed years ago.

His application notes that the only other restaurant nearby, Barnacle Bud’s, closes for winter. The area where the restaurant would be located is still home to many warehouses and light industry.

One of the more successful restaurants in Bay View, incongruously located just a couple blocks north of the Milwaukee Forge and its pounding drop forge, is Pastiche, a lovely intimate little French restaurant with great food. Well, now there will be room for many more diners as it will have a second location.

Last week, Pastiche owner Mike Engel “inked the deal” for a new location for Pastiche Bistro and Wine Bar, which will be at 4313 W. River Ln. in Brown Deer according to Milwaukee Magazine. The original Bay View location at 3001 S. Kinnickinnic Ave. will remain open.

The new location will be moving into and renovating the building once River Lane Inn closes on Dec. 23rd. Engel told the magazine the menu won’t be much different than the Bay View location, but the food and wine menu will change over time. He also may keep some of the “RL touches” that will be left behind by the River Lane Inn. The Brown Deer location is expected to open this February.

Stone Creek Coffee will have a second location in Wauwatosa opening in late summer or fall of 2016 – pending city approvals – director of teams and development Drew Pond told the Milwaukee Business Journal. They are moving into the eastern portion of the building at the intersection of Harwood and Glenview Ave. in “downtown” Wauwatosa, and the building is set to be renovated for Stone Creek next year by The Luther Group. An enclosed patio with large windows along with outdoor seating is planned for the location.

Stone Creek coffee already has 10 locations in the Milwaukee area, not far behind Colectivo with 13 (though it also has three cafes in Madison). Stone Creek’s other Tosa location is at 8340 W. Bluemound Rd.

On the 82nd anniversary of the end of Prohibition, the Iron Horse Hotel at 500 W. Florida St. welcomes Bonnies and Clydes from all around to their annual Prohibition Party on December 5th at 6 p.m. The press release promises burlesque dancers, music, and even a selfie booth at their bar, Branded. Those coming to the party dressed in their best roaring 20s costume can win a $100 or $50 bar tab at the costume contest.

Of course, you can’t celebrate the end of Prohibition without drinks, and the hotel has you covered. You can enjoy MKE Brewing’s Louie’s Demise drafts for $0.05 each starting at 6 p.m. as well as Louie’s Demise growlers for $5 each starting at 9 p.m. Also available are specialty cocktails, including Saerac ($9) with Bulleit, Peychauds bitters, Absinthe wash and simple syrup; Sidecar ($9) with Pierre Ferrand Cognac, Cointreau, lemon juice and a sugar rim; and Last Word ($9) with Rehorst Gin, Green Chartreuse, lime juice and Luxardo. Al Capone would be proud.

Last week, we reported that Iron Grate BBQ Co., a new restaurant specializing in smoked meats, would be opening on Dec. 4th at 4177 S. Howell Ave. and joining Hawthorne Coffee Roasters. But according to OnMilwaukee, the opening has been postponed.

“Given our unique business model of outdoor and year-round cooking, we are taking extra time to ensure that all procedures are approved through each city department,” owner Aaron Patin told the publication.

The new opening day has not yet been specified but we will keep you updated.

Chef Dan Jacobs is leaving Odd Duck at 2352 S. Kinnickinnic Ave. after working there since he left Wolf Peach in 2014, according to OMC. He commemorated the last meal he made at the restaurant last Sunday evening like anybody would: by posting it on his Instagram account.

Odd Duck has cultivated and launched the careers of many other chefs including Lisa Kirkpatrick and Paul Zerkel of Goodkind and Shay Linkus of The Vanguard. While Jacobs didn’t say what his next move is, he reassured us that he has plans and he’s not moving out of Milwaukee.

In fact, he’s still working with Kate Riley, known for making custom plates for many area chefs, on The Plate Collective. The Plate Collective is a series of collaborative dinners featuring Riley’s handmade pottery and hosted by her and Jacobs. Their next dinner is at Hinterland Erie Street Gastropub at 222 E. Erie St. on Sunday, Jan. 31st at 6 p.m. The dinner features Dan Van Rite of Hinterland, Ross Bachhuber of Odd Duck, Gregory Leon of Amilinda and Ryan McCaskey of Acadia in Chicago. Check out the website for tickets.

In the meantime, Matt Bauer is being promoted from sous chef to chef de cuisine at Odd Duck. Sam Ek will take his place as the new sous chef.

Ever wanted to tour Chicago’s breweries in style? Now you can! You can reserve your seats for the Chicago Beer Tour, hosted by Hop Head Tours.

According to the Eventbrite page, the bus departs Feb. 27th at 9 a.m. from Milwaukee at the Loomis Road Park and Ride and at 7:15 a.m. You’ll travel to the Goose Island Brewpub, Revolution Brewery and Taproom, and the Few Spirits Distillery with check in at the Crowne Plaza Hotel at 5:30 p.m. Then on the following Sunday, you’ll travel to Binny’s Beverage, Haymarket Brewery, Lagunitas Brewery, Vice District Brewing, and Atlas Brewing with a departure from the hotel at 5:30 p.m. and a return to Milwaukee at 7:15 p.m.

Tickets for the beer escapade are $350, but if you order before Dec. 23rd then you can get them for $300. The price includes lodging at the Crowne Plaza Hotel. For more details, you can check out the website.

Champps Americana at 1240 S. Moorland Rd. is celebrating its birthday with a long list of taps this Friday at 3 p.m., according to Milwaukee Mag. You can expect Founders KBS, Central Waters Black Gold, Dogfish Head 120 Minute IPA and several Bourbon Country varieties at the event.

The magazine also reports that Romans’ Pub at 3475 S. Kinnickinnic Ave. is hosting its 37th anniversary/Christmas party at the restaurant on Saturday at 6 p.m. The beer list hasn’t been published, but hopefully it will be checked twice.

Uplands Cheese Co. farm will be providing the ingredients for a dinner at Sanford, 1547 N. Jackson St., on Dec. 7th at 6 p.m., according to the Milwaukee Journal Sentinel. Sanford chef Justin Aprahamian and chef Jonny Hunter of Forequarter and the Underground Collective in Madison will be handling the dishes, which include steak from a retired Uplands dairy cow, dry-aged more than 100 days as well as veal and pork from a heritage breed of pig fed Uplands whey. Milk from the farm will be used to make butter, ice cream and more for the dinner.

While there were no other news releases about this, there is plenty of evidence confirming the close. Not only is there a sign on the door saying the bar is closed, but the bar’s Twitter account hasn’t been updated since July 16th, the Facebook page is not working, the bar’s website no longer lists the hours and the bar did not respond when I called it. Yep, it’s closed.

Did you frequent Catch 22? Any favorite stories? Let us know in the comments section below.