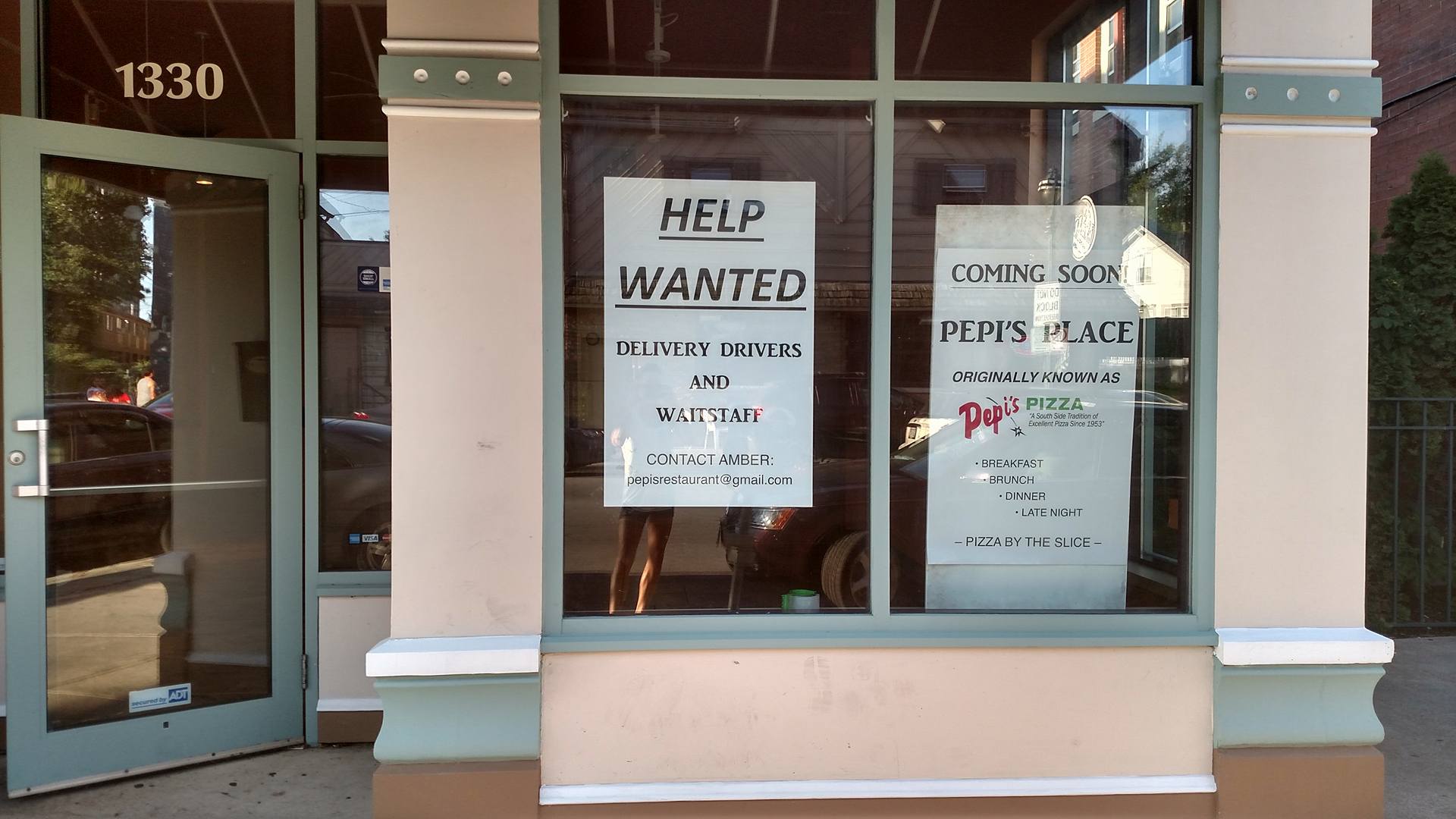 It’s actually just south of Bay View, yet still convenient for those looking to get a pizza delivered. But Pepi’s Pizza will be moving from its location on the South Side (3929 S. Howell Ave.) to the adjoined buildings at 1320 and 1330 E. Brady St. in the former homes of Philly Way and Berry Me Frozen Yogurt & Café. The business will also be renamed, though not much, becoming Pepi’s Place, and featuring dine-in eating in addition to the carry-out options they had before. The south side business only offered takeout and delivery.

Amber Mane, who owns the restaurant along with her father, Ricky Mane, told Lori Fredrich of OnMilwaukee that “Pepi’s used to be a sit-down restaurant, back in the 1950’s. We really wanted to get back to that. We also wanted to reach out to a younger audience. So, what better place to be than the “little Italy” on Milwaukee’s east side?”

The new restaurant will seat around 90 and will also offer breakfast and brunch, not to mention late night options on weekends through 3 a.m. In addition to pizza by the slice or pie, subs and wings, they are adding salads and pasta dishes to the menu, including stuffed shells, ravioli and spaghetti and meatballs.

SURG Restaurant Group’s top restaurant, Carnevor Steakhouse Moderne, will be moving from its location on 724 N. Milwaukee St. to a space right next door. The restaurant will take over the space previously held by the restraint group’s Umami Moto at 718 N. Milwaukee St.

It may seem silly to move to a location right next door to the old one, but SURG Restaurant Group owners Michael Polaski and Omar Shaikh told Alison Bauter of the Milwaukee Business Journal that they couldn’t come to terms with the landlord on their Carnevor lease, which they were renegotiating after 10 years. So they had to close the current location and move to the Umami Moto space as a result. And yes, this also means Umami Moto will be closing.

The new space will be remodeled to fit the steakhouse aesthetic of Carnevor. “When you walk in, you’ll know it’s Carnevor,” Shaikh said.

“Though the new space will not have the same private dining capabilities as the current location, SURG plans to utilize its new banquet space The Garden for all Carnevor private dining and wine dinners. Smaller parties will be reserved at Distil in its private space The Vault,” SURG said in a press release.

Umami Moto will close to start renovations after SURG’s Aug. 30th annual block party on Milwaukee Street. Carnevor will remain open throughout the transition and will reopen in the new space this fall.

Tutto restaurant, located at 1033 N. Old World Third St., will close on Aug. 29th to make way for the reopening of Giovanni’s Italian Restaurant on Oct. 1st, according to the Milwaukee Business Journal.

Giovanni Safina will be remodeling the first floor of the building previously held by Tutto and changing it to Giovanni’s. He is leaving a retirement largely spent in Sicily in order to reopen the restaurant. His son and the previous owner of Tutto, Sal Safina, will continue operating the newly reopened Comedy Café on the second floor of the building.

The original Giovanni’s, operated by Giovanni and Rosa Safina, was sold for redevelopment to Milwaukee real estate developer Endeavour Group Inc. in 2006. The company bought the location at 1683 N. Van Buren St. (several blocks north of the Park East development corridor) with plans to develop the space into a multi-tenant retail center. Giovanni and Rosa Safina had operated the restaurant since 1972 after they came from Sicily to Milwaukee.

Sal Safina’s Comedy Café relocated from its location on Brady Street to the second floor of Tutto. It will continue to offer guests dinner and a show.

According to OnMilwaukee, a new Latin American small-plates restaurant by the name of C-Viche plans to open at 2165 S. Kinnickinnic Ave. in Bay View where the Lovely salon was previously located. The restaurant will focus on Ibero-American cuisine, which comes from countries in the Americas that are former colonies of Portugal and Spain. This may be a trend for Milwaukee as the recently-opened Amilinda restaurant at 315 E. Wisconsin offers a menu dedicated to Spanish and Portuguese food and wines from these two countries. (But it is not a small-plate restaurant.)

C-Viche is owned by Karlos Soriano and Paco Villar, who met ten years ago while working at Rudy’s at 1122 N Edison St. (now home to Vagabond). They are both Milwaukee industry veterans.

“We are excited to give people a brand new concept,” said Villar, “And we will try to capture a bit of each country in the dishes and drinks we serve.”

The restaurant will serve both lunch and dinner. Soriano says the restaurant will emphasize affordable small plate dishes that can be shared between three people. The portions will be larger than most tapas or small plates. Ceviche will obviously be a large part of the offerings, including a Peruvian ceviche with halibut, lime, onions, cilantro and both fresh and toasted Peruvian corn. Many additional items are based on family recipes and include anticuchos, marinated beef heart that is skewered, grilled and served with a pepper-based sauce.

The restaurant will also feature a wide variety of beers and wines from several countries in Central America and South America along with Mexico, Spain and Portugal. Cocktails take inspiration from Mexico and South America and include variations on sangria and the pisco sour. Many cocktails will also employ spherical ice infused with green and red chiles to add flavor as the ice melts. Villar, who is currently bar manager at Cubanitas on 728 N Milwaukee St., would oversee the bar program.

“We’re 100 percent devoted to our guests,” says Soriano. “You have one chance to make a first impression. And we want to make sure we take advantage of that chance — from the door to the bar to the food.”

According to OnMilwaukee, the restaurant is headed by Wild Planet Hospitality Group, who are comprised of Red Rock Saloon, McGillycuddy’s, Red Lion Pub, Trocadero, Three Lions Pub and Evolution. The group not only handles operation, but full service private events and catering.

The Brass Alley will feature a mix of authentic Louisiana dishes, including red beans and rice, po’boy sandwiches and jambalaya, and local Wisconsin favorites. It will also incorporate a large drink program including eight frozen drink machines and new twists on classic cocktails like the sazerac and gin-fizz. Jeff Beale, executive chef for Wild Planet, will create the menu.

Expect to hear live music weekly, including jazz at brunch to high energy sing-a-longs on weekend nights as well as tunes from local DJs.

The Brass Alley will take up the first floor of the building while Evolution Gastro-Pong will move into the second floor from its previous location in the Third Ward. Evolution’s menu will add small bites and plates for sharing once it moves in. Both venues will be open on Oct. 1st with a third floor event space to open at a later date.

As noted, this will close as Carnevor takes over the space. Word has it that business had been declining at the restaurant for some time. But according to the Milwaukee Business Journal, Umami’s executive chef Israel Cruz and his team will still remain within the company, working at SURG’s other restaurants. Meanwhile, they will work on establishing another restaurant which Shaikh refers to with the working title of “Umami 2.0”.

The new restaurant will still focus on sushi, but with an added American flair. Shaikh describes it as “Asian with an American twist.” Curz will head the new project and SURG hopes to open the restaurant in Downtown.

Will this “American twist” mean French fries and cheeseburgers wrapped in bacon instead of seaweed like in this video by Epic Meal Time? Hey, just a thought.

Last year, Umami Moto hosted President Barack Obama for a presidential fundraiser. He is one of several sitting executives and candidates the restaurant has served over the years.