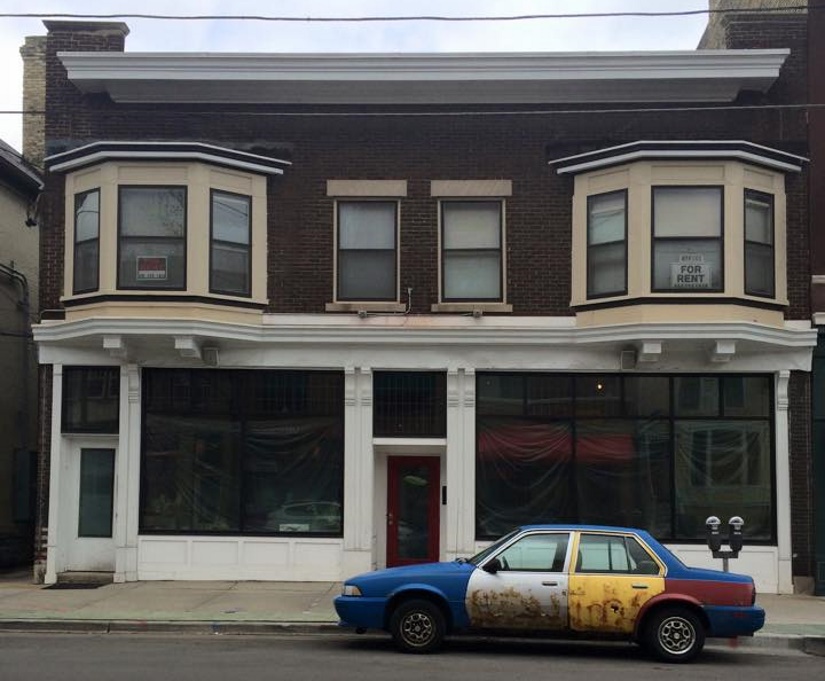 It was back in August that we reported that Easy Tyger would be opening at 1230 E. Brady St. as early as September. But construction delays occurred, the grand opening was delayed and now the restaurant’s owners are talking about opening early next year, as the Milwaukee Journal Sentinel has reported.

The menu, as we reported, will feature international small plates, New American style cuisine with influences from the Latin American Mediterranean and Asian food stylings. They are now calling it “street-food tapas,” as the JS story notes.

The chef is Evan Greenhalgh, who has a long background with Bartolotta restaurants; he was a sous chef at Lake Park Bistro and worked at Bacchus and the Rumpus Room. Easy Tyger’s owners are Nini Buranabunyut and Dear Panyasopa; they’re partners in Thai-namite, the popular restaurant also on Brady.

Their bar will have eight to ten taps with craft beers and international wines available by the glass or bottle, and a liquor selection that includes at least 10 different vermouths.

The restaurant will be showcasing art by area artists, as its Facebook page notes.

Greenhalgh told the JS he has been immersing himself in the street food of other cultures to create his menu, which may feature dishes like ramen or bibimbap rotate but also suppli, a Roman dish of fried rice balls that will be served with grated Parmesan cheese and pomodoro sauce. Other dishes could include “lángos, Hungarian fried flatbread topped with sour cream, dill, Gruyere, bacon and red onion, and Jamaican jerk pork loin, served with coconut rice, curried plantain and apple slaw,” he told the newspaper.

Prices for the small plates will range from about $7 to $16.

The restaurant will serve until midnight on Fridays and Saturdays and until 11 p.m. other days. It will be closed on Tuesdays.

The last time I saw Mr. Dye’s Pies, they were in a small tent at the first day of The Spot 4MKE in late July. But now, according to OnMilwaukee, this purveyor of sweet potato, pecan and key lime pies is now located in a building at 5513 W. North Ave.

For the past four years, owner Johnathan Dye has been sharing kitchen space with the Jackson Grill at 3736 W. Mitchell St. But as his customers grew, he began working with Alderman Russell Stamper II to secure a space to call his own. He also received a Kiva Zip loan, which helped him purchase a commercial convection oven for more pie production. And after accepting a proposal to create a shared-use kitchen and retail space at the North Avenue location, he moved in the week before Thanksgiving. He’s also currently sharing the space with Fathead Jerky, a business owned by McBob’s Pub & Grill proprietor Christine McRoberts.

“It’s a work in progress,” Dye told the publication. “But, I think it’s working well. People might think jerky and pie is an odd combination. But I know people looking for jerky, and now I have a place to sell my pies.”

The pies he’s selling include classic sweet potato ($18), Pecan Delight ($22), Purple Monster ($26) and Nawlin’s Pecan ($22). Sugar-free versions of the pies priced at $20 to $28 are also on the list. Dye also plans to release a Door County cherry pie in 2016. Pies are available for purchase daily at the retail shop, but Dye encourages customers to order ahead to beat the demand.

“I’m excited about the opening on North Avenue” Dye said in a press release. “We have a growing  customer base and this will make it easier for our customers to get their pies.  As a Washington Heights resident I know first hand that North avenue is an up-and-coming part of the city. It is an honor to become part of this story.”

According to the Mr. Dye’s Pies Facebook page, you can also buy whole pies at Sendik’s Fine Foods at 18985 W. Capitol Dr. in Brookfield. Locations selling just slices include Camino Restaurant (which opened back in late October) at 434 S. 2nd St., Ashley’s BBQ at 1501 W. Center St., Sven’s Café at 2699 S. Kinnickinnic Ave. and many more. We can also see from the Facebook page that the pie purveyor is proud to have served such local luminaries as County exec Chris Abele, Milwaukee Police Chief Edward Flynn and Mayor Tom Barrett.

The former Village Pub at 4488 N. Oakland Ave. in Shorewood will soon be transformed into a new concept, according to OMC. Lis Duggan and Rebecca Goldberger – former owner of Roots Restaurant and current manager of The Irish Pub – bought the building and plan to open the new concept in spring of 2016.

“It will be a completely new concept. I will say we won’t be re-opening The Village Pub, but we hope it will be a positive place for everyone in the neighborhood and beyond,” Goldberger told the publication. “We are just so excited to add something positive and unique to the community. This is our new passion project.”

The Iron Horse Hotel, located at 500 W. Florida St., is offering not one, not two, but three holiday events for the end of the year, the hotel told us via email. So grab your extra-large pair of pants and your family for three days of holiday cheer.

Their high class restaurant, Smyth, is open for dinner on Christmas Eve from 5 to 9 p.m. serving the regular menu. And on Christmas Day, they’ll be offering their holiday brunch from 9 a.m. to 2 p.m. On the a la carte menu, you can enjoy fish tacos with bluegill, kohlrabi slaw, and sriracha; eggs benedict with choice of ham, lox or spinach; and malted-brioche French toast with bing cherries, Nutella and real maple syrup. The buffet offers hot options like cheddar-leek scalloped potatoes, Bernie’s Bacon and Lobster & Mussel trivelli as well as cold options like sweet pepper escabeche, house-smoked salmon, and Christmas cookies. There will of course be a carving station with ham and leg of lamb as well as an omelet station. The brunch is $49 for adults (which includes three mimosas) and $16 for kids.

Celebrate the new year right with a New Year’s Eve party from 7 p.m. to 2 a.m. Dance along to DJ Fred X from 9:30 p.m. to 1 a.m. and prepare for a festive balloon drop at midnight. The hotel is also offering a Sweet NYE Package for those staying the night, which includes accommodations for two in a Custom Deluxe room, two entries for the NYE party, complimentary sparkling wine, mimosa brunch for two at Smyth, and late check-out (based on availability).

As for lunch, options include Penne with Chicken seasoned with agave spice and served with Romesco sauce ($12), tacos ($12) or quesadillas ($11) with a choice of chicken, steak, mahi mahi and bay shrimp; Agave Southwest Burger with an angus burger seasoned with agave spice blend and served on a brioche bun with sharp cheddar and fresh jalapeno ($10), a portabella mushroom sandwich with roasted red peppers, onion, spinach and chipotle mayo served on a brioche bun ($10) and a variety of soups and salads.

Come up to the lab and see what’s on the slab when Twisted Path Distiller, a Milwaukee-based grain-to-glass micro-distillery, launches regular hours at its tasting room, known as the Dock18 Cocktail Lab, starting Jan. 7th. According to OMC, Dock18 is located at 2018 S. 1st St. just past loading dock 17 on the first floor of the warehouse.

Bittercube, a nationally renowned, Milwaukee-based cocktail consulting and bitters company, is partnering with Twisted Path to provide a weekly menu with both classic and experimental cocktails with Twisted Path spirits, Bittercube bitters and house-made syrups and liqueurs.

Mark your calendars for the grand opening celebration on Jan. 2nd from 5 p.m. to midnight. In addition to meeting Bittercube co-founder Nick Kosevich, you can also shake your stuff to the tunes of DJs Chris Rosneau (Volcano Choir, Collections of Colonies of Bees) Jon Mueller (Volcano Choir, Rhythmplex) and musician Hal Rammel. The event is open to the public but you are encouraged to RSVP via the Eventbrite page.

Dave Baldwin, creator of the secretive Milwaukee gem known as the Safe House, died at 85 last Sunday, as reported by the Milwaukee Journal Sentinel.

Baldwin worked as a ballroom dancing instructor in college and later worked as a model and even practiced law before realizing that his true passion was in night life. He started Whiskey A-go-go with a few partners in the early 1960s as well as Gatsby’s Steak House. Then with the popularity of the James Bond movies in 1966, he decided to create a 007-themed tavern.

Shauna Singh Baldwin, his wife, told the newspaper that Dave built the Safe House from materials salvaged in Milwaukee, and added that he was always able to find the hidden beauty in things and people.

The Safe House, tucked in an alleyway behind The Newsroom Pub at 137 E. Wells St., was designed in homage to classic 60s Hollywood spy movies with its secret revolving door entrance, spy memorabilia, secret doorways and passwords. It also served many famous cocktails such as Spy’s Demise and Hail to the Chief.

As Michael Horne wrote last year, Dave Baldwin figured the bar “might run its course in seven years or so” but “it’s been seven cycles of seven years, and the Safe House is still riding strong…. Some six million customers have walked through the door since 1966.” One of the bar’s many amusements, he noted, is “a closed circuit television monitor that records the antics of those who come to the bar without knowing the password. Folks in that state of affairs, and they are numerous, are required to perform some stunts that inevitably make them look foolish, before being admitted through a secret passage. As soon as they enter, they are already well-known to the customers who have been enjoying the free show.”

Baldwin worked on the Safe House for nearly 50 years before selling it to Milwaukee-based Marcus Corp. and retiring in June. “David lived and breathed the Safe House,” said Peggy Williams-Smith, senior vice president of Safe House Restaurants. She says they have special plans to honor Baldwin during the Safe House’s 50th anniversary celebration.

Was Baldwin himself ever a spy? Williams-Smith told the newspaper that she asked him at least 25 times but never got an answer. “He would always just give you that look with a twinkle in his eye and continue on with the conversation,” she said. “A true spy would never identify himself,” Singh Baldwin added.