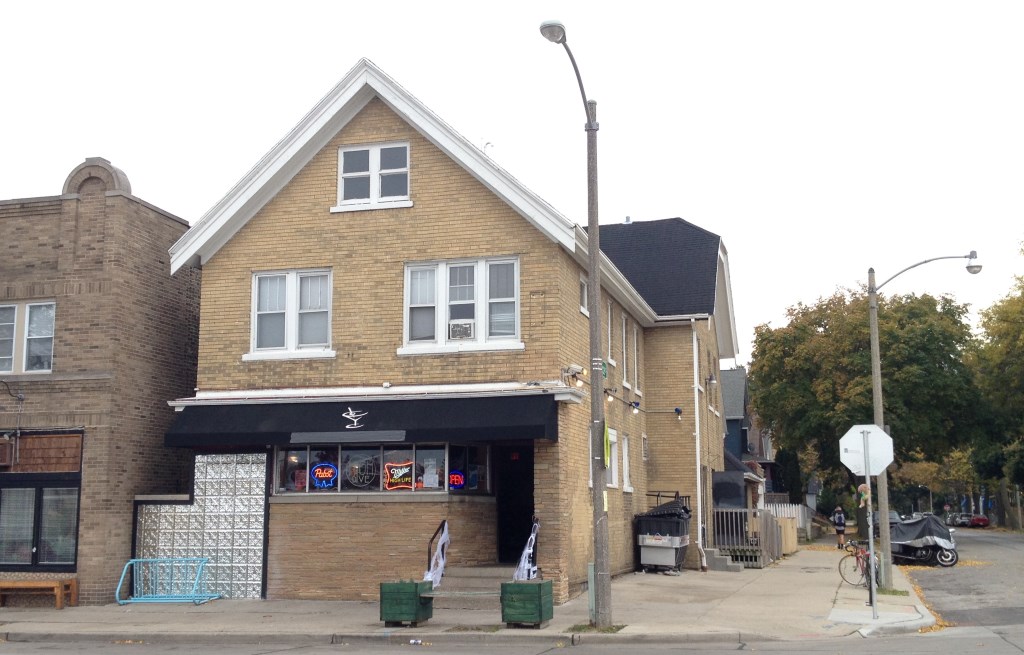 Of all the bars in Milwaukee the one I visited the most on trips home, back when I wasn’t a resident, was River Horse on the corner of Center and Pierce streets in Riverwest. This was mainly because my friend Brandon Brazil Reyes used to DJ there, but I also dug the place. In 2012 it became Impala Lounge, angling for a more upscale cocktail vibe. That model lasted for a couple years and closed last December. The opportunity to take over the space fell into the lap of Bremen Cafe bartender Jason McBrady and he opened High Dive this summer.

In many ways High Dive is a kind of a spin-off of Bremen Cafe, given its focus on live music. Like Bremen, there are two rooms at High Dive, but the latter has the stage in the front room alongside the bar. The back room has some vintage furniture and a bumper pool table. High Dive’s stage is pretty small and makes for a very intimate experience. A few of the Bremen regular music nights jumped ship to High Dive, including Bluegrass Wednesdays and Jazz Sundays. What McBrady and company have done to set themselves apart is increase the frequency of shows, up to four or five in a week, and there’s never a cover charge. Also, many of the bands are from out-of-town, which is a result of McBrady’s connections and those of the local musicians he has on staff working behind the bar. Tomorrow, on Saturday night, Milwaukee’s premier dirty dance party-pop outfit, Rio Turbo, will share the High Dive stage with Chicago’s Running and San Francisco’s Male Gaze.

Though the live music is free, High Dive doesn’t make up for it with expensive drinks. Their PBR tallboys are always $2, Old Milwaukee is $2.50 on tap and Schlitz is $3. They also carry quality draft brews like Karben4’s Fantasy Factory (American IPA, $5), Ale Asylum’s Kink (Belgian strong dark ale, $4), and Central Waters’ Satin Solitude (Imperial stout, $5). Plus, they have reliable $4 crafts like Riverwest Stein, Lakefront IPA, Lakefront White, and Stella Cidre on tap.

Another way that High Dive is like Bremen Cafe is their identical happy hours; 4 p.m. to 9 p.m., every day of the week. The deals are similar with $1 off taps and rails, but High Dive adds $1 off bottles (regularly $4, except domestics). They carry one of my favorites, Rogue Dead Guy Ale, along with Central Waters Honey Blonde Ale and Mudpuppy Porter, Sierra Nevada Pale Ale, Ale Asylum’s Hopalicious and Deschutes Chainbreaker White IPA. Left Hand Milk Stout is $5, as well as tall cans of Seattle Cider Company’s Dry and Citrus varieties.

High Dive has also become a fun place to watch Packers games. They provide a free cereal bar complete with non-dairy milk options and McBrady typically bakes a few pans of homemade mac n’ cheese. Standard touchdown shots are accompanied by $5 bloodies (sometimes with grilled cheese garnish) and $4 mimosas. The regular Sunday special is $5 Pony Killers (whiskey, ginger ale and bitters), Monday is a PBR tallboy and a shot of Tullamore Dew for $5, Tuesday is a bottle of Sierra Nevada and a shot of Jim Beam for $5, Wednesday is Dark and Stormy for $4, and Thursday is a bottle of Miller Lite and a shot of Tullamore Dew for $5.

While I was sipping on a Seattle Citrus cider this week at High Dive, local saxophone savant Jay Anderson stopped in for a pint of Kink. He proposed to McBrady that on Sunday nights — when his jazz trio Stomata (who will be wearing suits) plays — the bar should have martini specials. McBrady seemed open to the suggestion and in general it feels like the bar is still a work-in-progress. What they’re doing so far is apparently working, considering three kegs were empty from a busy weekend and a Tuesday night show. (They’re also known to hook up a retro Nintendo system for gaming on Tuesday nights.) With McBrady’s reputation and the amount of goodwill the local music community has shown High Dive, I bet they hang around for a while. 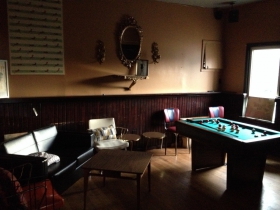 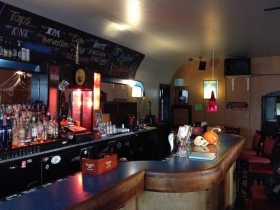 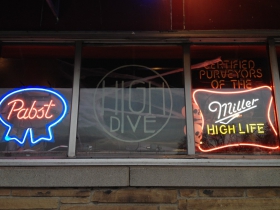 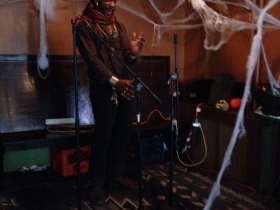 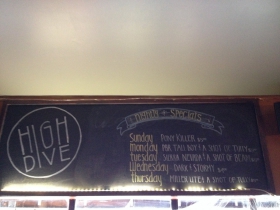 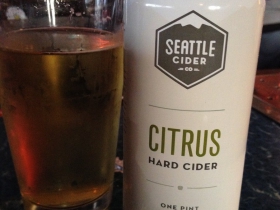