The bar’s happy hour runs 5 hours a day, 7 days a week. And there’s lots of live music and comedy.

A construction worker, a bike messenger and a comedian walk into a bar. That’s not the beginning of a joke, it’s just what I observed on Monday night at Bremen Cafe in Riverwest. However, I did hear a bunch of jokes that night. While I went for the happy hour, I stayed for the comedy open mic. (Full disclosure: I occasionally perform around town.)

I kicked the new year off with a visit to the Pfister Hotel’s Blu Lounge, a swanky spot towering above downtown. I thought it would be appropriate to follow it up with an unpretentious, ground floor, neighborhood corner bar. Bremen’s nondescript exterior might have you believe it lacks charm, but a close look at its sign offers a hint as to their speciality. The lettering sits inside a guitar graphic, as Bremen features free live music every weekend (local, national and international acts), plus Monday (open mic, after comedy) and Wednesday.

Bremen Cafe feels like a 1960s Greenwich Village vibe meets modern day Riverwest. It sits inside an old wood building with a cozy green interior color scheme. There are three rooms: the bar in the front, the pinball middle section and the stage in the back. Owner Dave Kopp took over Bremen eight years ago when it was a cafe, sandwich shop and bar hybrid. Kopp moved the stage from the front room to the back, where it’s more intimate. True to their cafe roots, Bremen still has a large vintage coffee grinder and a wide variety of tea.

“I wanted it to be a place where you can walk in for free and hear different kinds of music. You can talk politics with a stranger or sit and read a book without someone bothering you. Sometimes we make food for Packers games and people bring in their kids. They’ll pull up a chair to play pinball while their parents watch the game. I like having that family feel,” said Kopp.

Happy hour starts when the bar opens, 4pm, and runs until 9pm, seven days a week. During football season they open at noon on Sundays and happy hour runs all the way from then until 9pm. The deal is simple but effective; $1 off pints and $2 off liters. Only a few non-German bars in town sell liter steins, let alone at a discount. This week on tap they have Angry Orchard, Bell’s Two Hearted, Sheep Shagger, Lakefront IPA, Riverwest Stein, Fixed Gear, and Old Milwaukee. Before going up on stage I downed a liter of their featured tap, Geneva Lake’s Oatmeal Stout, a smooth, mellow brew. Rails are also $1 off during happy hour, which normally run $4 for a short and $5 for a tall.

Once happy hour ends the weekly specials start. Monday is Ladies Night, with a rotating selection of cocktails and $2 pints of Angry Orchard. Tuesday it’s $3 you-call-its, but no top shelf. Wednesday features $5 old fashioneds to accompany the free bluegrass show (“Ain’t Your Granny’s Hootenanny,” music starts about 10pm) ran by the Thistledown Thunders. Thursday is $1 off premium bottled beers and Saturday from 4pm-5pm they have $1 off domestic bottles. Sunday is $5 bloody marys and free touchdown shots during Packers games. Their drink selection is rounded out with a nice collection of liquor, about 35 bottle beers (mostly Wisconsin), plus 5 red and 3 white wines ($6 glass/$18 bottle).

I’ve yet to find a meat stick ($3) selection as diverse as the one at Bremen Cafe. Other edibles include “Dirty” brand potato chips ($1), Milwaukee Pizza Company frozen pies ($8) and Clark candy bars ($1). The holiday decorations are still up at Bremen, which is awesome. This coming Monday will be Jake Kornely’s final hosting gig at the comedy open mic, but the “Comedy Show Comedy Show” will live on. Whether it’s free laughs or free music, Bremen has got you covered, with drinks cheap enough they may give you the courage to step onstage. 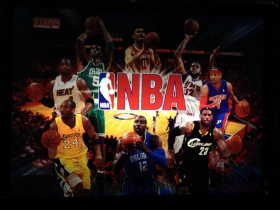 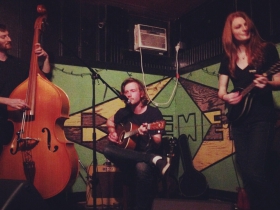 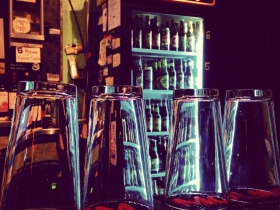