Thai-Namite Is a Spicy Treat

The food’s great. And the reduced-price beers help cool off the heat. 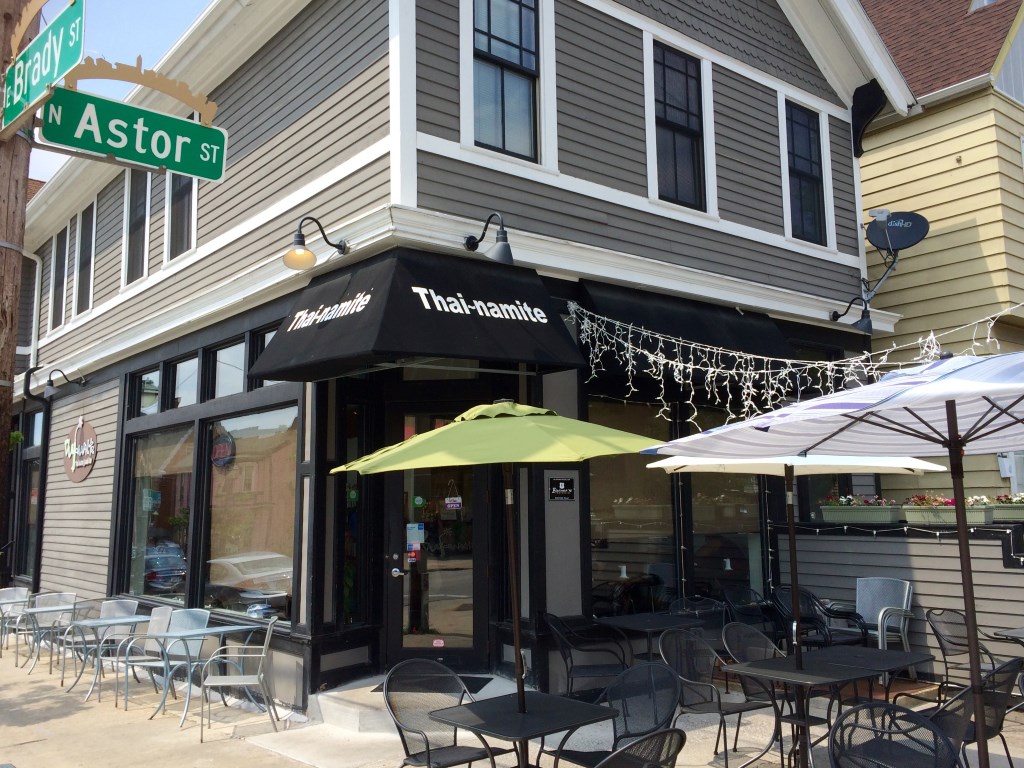 On Saturday my girlfriend and I trekked north to Appleton for the fourth installment of the Mile of Music festival, colloquially referred to as “Mile 4.” To be honest, Appleton wasn’t on my radar until about four years ago when my college friend moved there to open a Vietnamese/Thai/Lao restaurant with his sister called Basil Café. In early 2014 I went to visit him and we caught comedian T.J. Miller, (who will be playing the Pabst Theater on August 28), at the Skyline Comedy Club. The cozy club and surrounding Fox River area thoroughly impressed.

Mile of Music is primarily an Americana/roots festival, not exactly my favorite style of music. However, this year the festival added its first hip-hop showcase, curated by Milwaukee’s own Lex Allen of New Age Narcissism. The showcase, which took place at a Lawrence University theater, is what drew us to Appleton, but we quickly took to the festival and discovered a number of talented bands, including Idle Empress from Eau Claire.

The festival takes over a one-mile stretch of College Avenue in downtown Appleton, plus a few satellite sites. This year they had over 800 performances by over 200 musicians at 70 venues over four days. It was somewhat dizzying and I lost count of how many times we walked up and down College Avenue. Because of all the activity we abandoned our plan to visit Basil Café, which is a mile from “the Mile,” and instead grabbed quick and easy sandwiches. We had a great time, but I was left craving Southeast Asia cuisine. It also didn’t help that we dozed off in our hotel room to an episode of Anthony Bourdain’s Parts Unknown. (It was about Seoul, South Korea, close enough, and giving me thoughts of Asian food.)

When we returned to Milwaukee I was determined to find a Vietnamese or Thai spot to feature for my happy hour this week. Turns out that isn’t an easy task. I called more than half a dozen restaurants in town before finding a couple with happy hours. Mekong Cafe on North Avenue and 60th Street, as well as Thai-Namite on Brady Street. I’ve eaten at Mekong Cafe and though their service was considerably slow one Saturday night, their pho to go always hits the spot.

Thai-Namite (932 E. Brady St.) is located on the corner of Astor and Brady. It is a narrow, light-filled space with a modestly sized patio out front. There is a sushi bar in the middle of the restaurant. They specialize in both Thai cuisine and sushi creations, with a number of dishes incorporating elements of Wisconsin fare.

Their happy hour runs Monday through Thursday from 3 p.m. to 5 p.m. and features $1 off beer and appetizers. They do not have taps lines, but carry bottles of Singha, Sapporo, Spotted Cow, plus Lakefront’s Riverwest Stein, IPA, and Klisch. They have ten appetizers, with standards like edamame, chicken satay, spring and fresh rolls, crag rangoon, tempura, plus unique inventions like “shrimp in a blanket” (marinated shrimp and ground pork, mixed with water chestnuts wrapped in rice sheet).

The only time I could stop in this week was during their lunch special, which runs Monday through Friday from 11 a.m. (open) to 3 p.m. For $8 you can get six of their Thai bistro entrees plus a spring or fresh roll. I ordered the Ginger Heat, which is a stir fry with your choice of meat/tofu/veggies/shrimp ($2 extra) with green bean, bell pepper, and prik khang curry sauce. Since I had to coach tennis shortly thereafter I wanted something light, so I chose more veggies. Next time I think I’ll get the Pad See Ew (stir fried wide rice noodles, egg, and broccoli in a brown sauce) with meat.

The entree menu has a number of classic Thai dishes, curries, stir fried noodles and fried rice. The two that stick out to me are the “3 Musketeers” (deep fried chicken strip topped with pineapple sauce, accompanied by sauteed bell pepper, onion, carrot, and pineapple) and the “Thai-Namite Curry” (chunks of beef with onion, potato, carrot, cashew nut, coconut milk and Mussaman curry sauce), which is sort of their take on the Irish beef stew and is served with roti flatbread instead of rice. If I can recommend one menu item it is the Tom Kha Chicken soup, a scrumptious blend of chicken, cabbage and mushroom in a creamy coconut broth, flavored with galangal and lime juice.

There are a number of beverage options to wash down the delicious meals at Thai-Namite. Besides beer, they have over a dozen wine options, including two sparkling, $10/$6 ($27 bottle), seven whites ($6-$8 by the glass, $27-$36 bottles), 5 reds ($6-$9 by the glass, $27-$42 bottles). On Tuesday night they do half-off a select bottle of wine. They also carry four different sakes by the glass ($6/$7) and one 300ml bottle for $33. Interestingly, they will do flavored sakes (blood orange, passion fruit, mango, or strawberry), for which they take the house sake (Tozai Typhoon) and flavor it with a puree. In the non-alcohol department they have Thai iced tea, Thai iced coffee, hot and cold green tea, and a variety of sodas. If you’re looking for a different kind of Happy Hour, Thai-Namite certainly offers that. 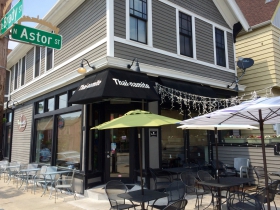 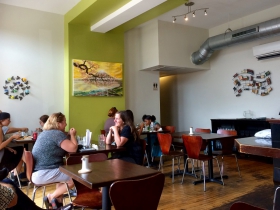 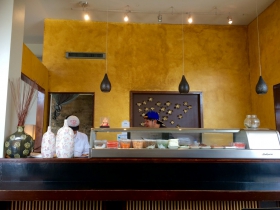 One thought on “Weekly Happy Hour: Thai-Namite Is a Spicy Treat”