And it’s the perfect place for a drink before Milwaukee Film Fest screenings at the Times. 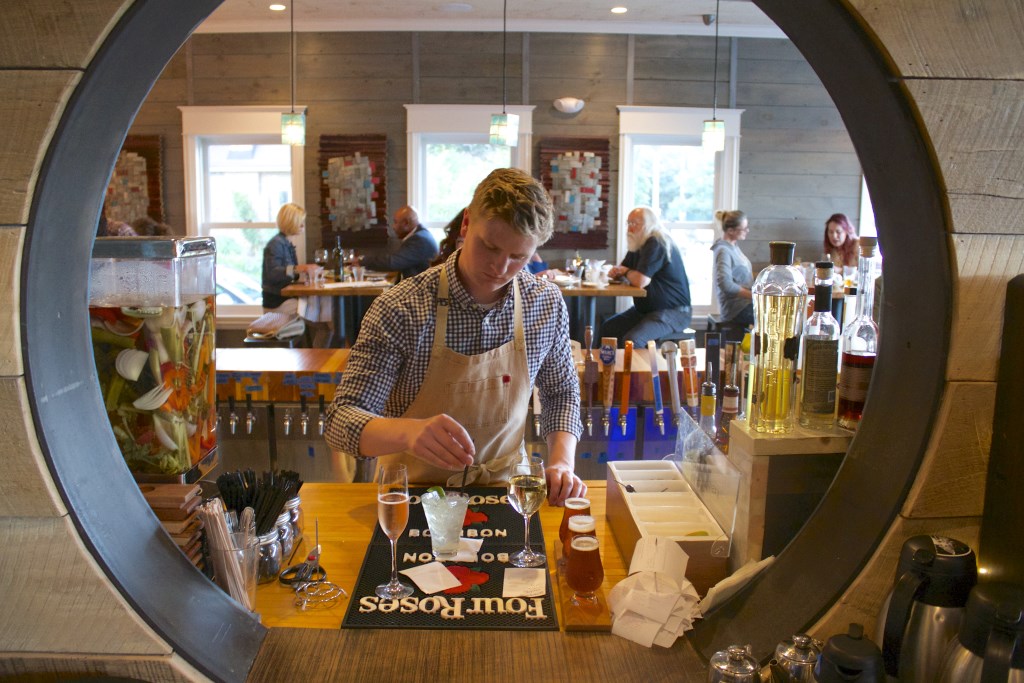 The success and popularity of the Milwaukee Film Festival is due in large part to their enthusiastic members and community partners. Among our local restaurants one group stands out for their community engagement, Black Shoe Hospitality, which includes Maxie’s Southern Comfort, Blue’s Egg and their latest venture, Story Hill BKC. The West Side business (5100 W. Bluemound Rd.) is putting a delicious Upper Midwest twist on small plates and family-style dining in a space that feels like Brooklyn meets Bluemound. (Plus, it’s close to the Times Cinema.)

BKC stands for “Bottle Kitchen Cup” and this dining destination has no shortage of beverages to fill up your cup or bottles to take home. Their happy hour features $2 off the regularly rotating, 21 lines of tap beers (three quarters or more from the Upper Midwest) and their seven tap cocktails. It even includes $2 off Point Root Beer on tap, making it only $1. Happy hour runs Tuesday through Saturday, from 2 p.m. to 6 p.m. (they close at 2 p.m. on Sundays and are not open Mondays) and also includes a rotating $5 white, red and rosé wine. One dollar from each sale of a featured tap cocktail goes towards a local charity. When I stopped in earlier this week it was their “Patio Punch” (blueberry rooibos tea, raspberry infused vodka, sport tea and lime juice) supporting HOME GR/OWN, which helps city residents turn vacant lots into urban gardens and green spaces.

The beer selection at BKC is thoughtful and features a theme almost every month. Illogical as it may seem, September was Oktoberfest and BKC had more than a dozen on tap and seven in bottle. If there’s any left I highly recommend the O’so O-Toberfest on nitro tap and the Dead Ringer Oktoberfest by Ballast Point. Or try any three beers in a flight, any time of the day for $7. (They regularly offer flights featuring different styles of beer.) Once the Oktoberfest kegs run dry they’ll swap them for pumpkin beers. BKC’s signature event is Beer Bites, which pairs food with their themed beers. BKC collaborates with brewers in their pairings and invites them to the event. In November they welcome Surly Brewing of Minnesota.

While their drink menu is excellent, the food is just as good at BKC. The prices don’t change, but they have a happy hour menu (2 p.m. – 5 p.m.) that includes a variety of “in-between” items, a selection of staples from the lunch and dinner menus. Supper is BKC’s bread and butter, and you’d be remiss not to start with their fresh baked butter-flake rolls. No matter what the main meat dish is, it comes highly recommended. On the lighter side the corn and black bean salad is fantastic, the elote (Mexican corn on the cob) always hits the spot, the flatbreads are popular and the crêpes don’t mess around.

Besides offering many magnificent bottles of beer in their shop and the option of taking home a 64-ounce growler from their taps, the resale side of BKC shines in the wine department. With over 300 bottles of wine for sale the price they can offer at the table drops considerably.  They also have a tasteful collection of spirits, including WhistlePig 10 Year Straight Rye Whiskey. The distillery is unique in that it aims to create the first single-estate straight rye whiskey made in America, with everything from growing the rye to bottling taking place on their family-owned Vermont farm. Last week I had lunch with the distillery’s founder and CEO Raj Bhakta at BKC, when he was in town selling their latest product, the exquisite 12 Year Old World. This award-winning rye is not yet on BKC’s shelf, but you can enjoy WhistlePig’s wonderful 10 Year on the rocks, in a Manhattan, in a traditional Old Fashioned, or take a bottle home.

The film that BKC partnered with is King Georges, a touching documentary about a landmark French restaurant in Philadelphia. It pairs well with “The Business,” BKC’s twist on “The Bee’s Knees,” a classic gin, lemon juice and honey cocktail, which they update with lemoncello, agave nectar and add a splash of lime juice.

That got me thinking about other festival films that could paired with drinks at BKC. August’s members-only screening was The Kindergarten Teacher, a gorgeously shot, superbly acted Israeli/French film about a five-year-old poet prodigy and his affected teacher. The titular character’s bold actions remind me of one of BKC’s built cocktails (not on tap), “The Back Pocket,” a mix of Grand Marnier, Valentine coffee, brown sugar simple syrup, and vanilla egg créme whipped cream.

Before or after A Year in Champagne, a documentary about the bubbly, plays at the nearby Times Cinema on Saturday, enjoy a classic mimosa (made with Undurraga Brut), have a glass of Louis Roderer or purchase one of their many bottles in the shop.

Later that evening at the Times settles in for oddball-actor-turned-cult-director Bobcat Godlthwait’s loving portrait of comedian-turned-humanitarian Barry Crimmins. I’d suggest a few pints of Central Waters’ “Call Me ‘Ol Fashion,” a strong ale aged in brandy barrels, before seeing Call Me Lucky.

Apart from meeting my girlfriend on the red carpet after the Opening Night Party of last year’s MKE Film Fest, my second favorite moment was during the rowdy late-night screening of the 1984 Talking Heads concert film Stop Making Sense. This Saturday night the Oriental dance party returns. In order to stay light yet loose on your feet, I recommend downing a few tall boys of Burning Bros. Pyro gluten-free beer beforehand.

On the way to taking your kid(s) to the Avalon Theater Sunday morning for the visually lush, hand-drawn animated Irish film Song of the Sea grab a cup of An Irish Man in the Cold (Irishman Irish cream and whiskey, honey, Valentine espresso, cinnamon, milk, and whipped cream).

The harrowing and visceral Belgium/Netherlands competition film Violet, a debut feature from Bas Devos, playing Sunday night at the Times, could use a couple glasses of Ommegang’s Hennepin Farmhouse Saison to enhance the perception-bending cinematic experience.

At the end of the month the new logo sporting, new arena awaiting Milwaukee Bucks will open their NBA season at home for the first time since 1984. The film the Bucks chose to sponsor, T-Rex, plays Monday at the Downer, and is a crowd-pleasing underdog story about teenage Olympic boxer Claressa “T-Rex” Shields. Founders’ Double Trouble Imperial IPA also packs a punch.

There is only only one drink to accompany the highly anticipated special 35mm screening of Stanley Kubrick’s legendary horror film The Shining on Tuesday night at the Oriental and that is the Story Hill Bloody Mary. Trust me, you want to pay the extra 50 cents for the house infused vodka. You won’t regret it.

You could slide the usher a “Bluemound Buck” (vodka, ginger, lime juice) and they still wouldn’t let you into the Super Secret Members-Only Screening, which happens Wednesday at the Oriental. That is unless, of course, you are a member of Milwaukee Film. It’s not too late to join and attend one of the two screenings. Luckily for you, memberships are discounted through the run of the festival and get you an invitation to monthly members-only screenings throughout the year. Whether you decide to support the festival with a membership, a few films, or patronage of their community sponsors, try to make the best of the rest of the fest, and then feast at Story Hill BKC.

And don’t forget that Hotel Foster has a special happy hour for MKE Film Fest pass and same-day ticket holders. 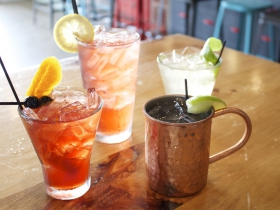 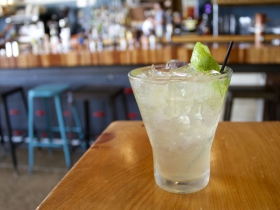 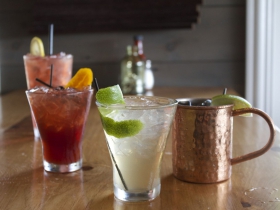 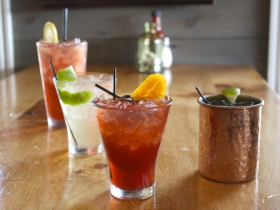 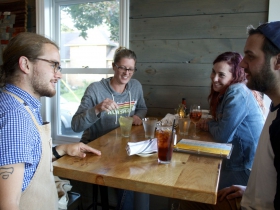 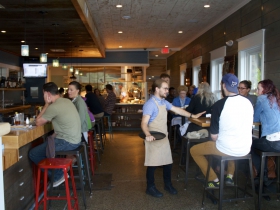