East Side bar has a special happy hour for Milwaukee Film Festival goers, plus film/drink pairings. 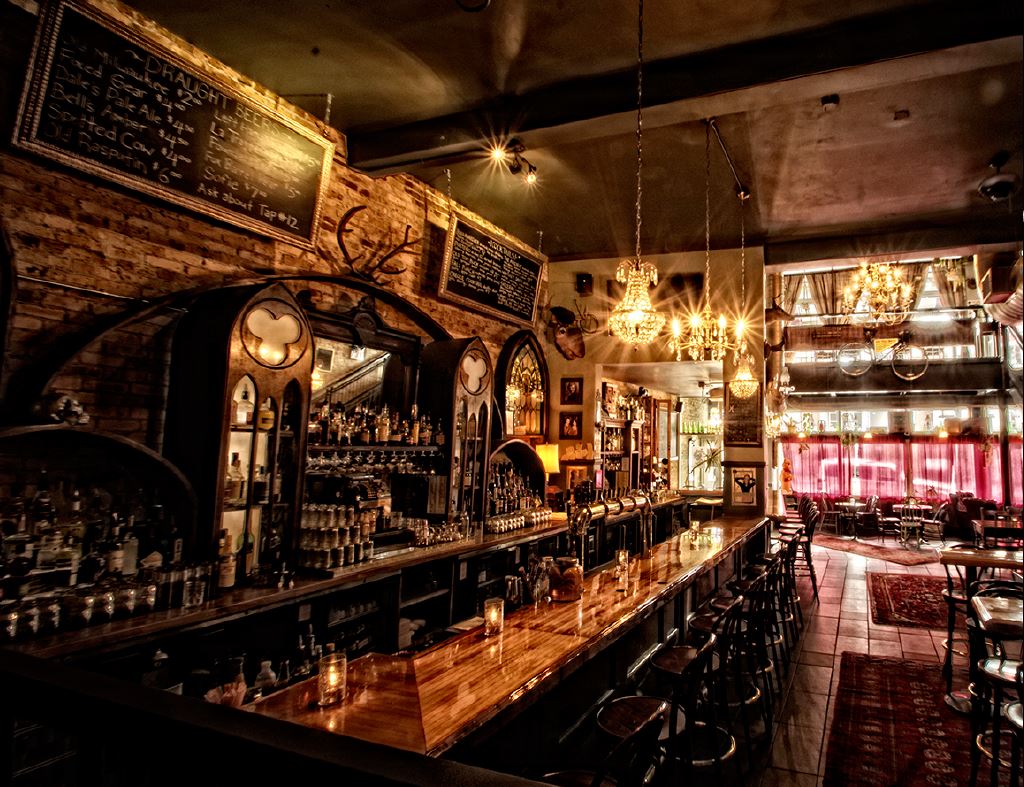 As I wrote last year in my preview to the Milwaukee Film Festival, this is my favorite time of year. Between the leaves beginning to change colors, Halloween hijinks on the horizon, and the Film Fest, Fall is truly a magical season. In seven short years the Film Fest has become one of the city’s most important cultural institutions, not to mention one of the most fun and inspiring events. Exactly one year ago today I met my girlfriend while walking on the red carpet after the Opening Night Party. Sounds like a scene in a cheesy romance flick, but it’s a true story.

The 2015 edition of the Film Fest will feature over 300 true, half-true and completely made-up stories screened at five different theaters. This year the Festival added the newly reopened and beautiful Avalon Atmospheric Theater & Lounge in Bay View. As usual, the festival is based at The Oriental Theater, our gorgeous 1927 East Indian movie palace on the East Side. Just around the corner is The Hotel Foster (2028 E. North Ave.), the official bar of the Fest. Because of their connection to the Film Fest I revisited the stylish confines of Hotel Foster, which was the second stop in this weekly column.

If you bring in a same-day ticket stub or Festival Pass from 5 p.m. to 8 p.m. you can receive Buy-One-Get-One Leinenkugel’s Oktoberfest, Crispin cider, Miller High Life, Miller Lite and Texas Mule cocktails (a Moscow mule using Deep Eddy’s Grapefruit Vodka). In addition to the drink specials, Hotel Foster will host two live music performances on Wednesday September 30 and Wednesday October 7. The first Soundtrack will follow the inaugural Milwaukee Music Video Show (9/30, Oriental, 6:30 p.m.) and will be headlined by Milwaukee’s preeminent music collective, New Age Narcissism, who have two videos in the program (one of which features yours truly running like a madman). 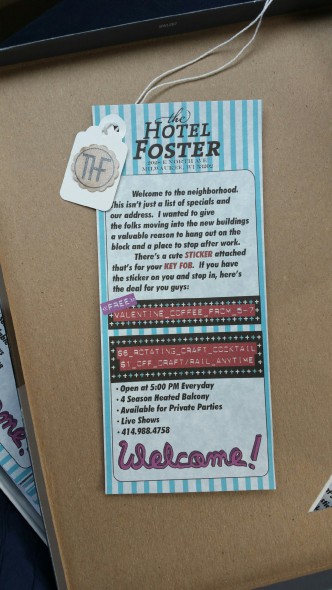 In addition to their special deals for Film Festival goers, Hotel Foster is offering exclusive discounts for residents of the new buildings in their neighborhood (above the East Library, the old Prospect Mall and Pizza Man sites). These will include free Valentine coffee, $6 rotating craft cocktail, and $1 off taps and rails from 5 p.m. to 7 p.m., and they’re spreading the word with cute door hangers .

Whether you’re looking to discuss an afternoon film over a few adult beverages or enjoy them before an evening screening, below is a list of recommended films from the first week of the Festival paired with Hotel Foster drinks.

Before the Opening Night feature Youth transports you to the Swiss Alps with Michael Caine, Harvey Keitel, and Rachel Weisz, spark your own meditation on life and love with a pint of Enlightened’s A Priori Pale Ale, a local microbrew from Bay View available on tap.

One of the most risk-taking and challenging films of the festival, Ukrainian performance artist and childhood survivor of the Chernobyl disaster Fedor Alexandrovich’s The Russian Woodpecker is a documentary with images and subject matter you won’t be able to put down, much like a pint of Old Rasputin stout, available on nitro tap.

Out of work academics is a demographic we are too familiar with in Wisconsin, given our recent budget cuts to higher education. In the Italian film I Can Quit Whenever I Want (Smetto Quando Voglio), a group of underemployed professors turn to the drug trade in this winning social satire. Pair it with a couple glasses (or bottle) of Lagaria Italian-style Pinot Grigio.

Locally-made has become a big deal in the beverage business and also at the Film Fest. This years program boasts an attractive slate of Wisconsin-made films. The one that hits closest to our palate is Wisconsin’s Own, which features two shorts, Old Fashioned: The Story of the Wisconsin Supper Club and Tale of the Spotted Cow. No surprise here, we recommend an Old Fashioned cocktail and a pint of Spotted Cow (on tap and in bottle).

When I lived in Minneapolis I always looked forward to the British Arrow Awards screening at the Walker Art Center. Milwaukeeans will finally get their chance to see the wittiest and best British commercials of the past year. Enjoy them with a bottle of award-winning British beer by Samuel Smith (Oatmeal Stout or Nut Brown Ale). 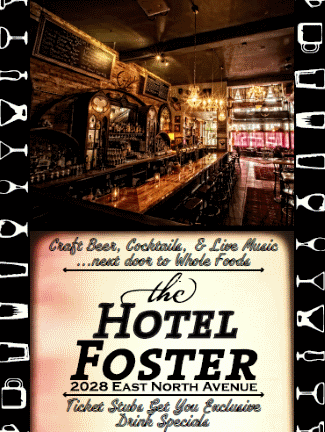 A little bit of nostalgia and a lot of blood can go a long way. Such is the case with Turbo Kid, a retro-futuristic action comedy set in post-apocalyptic 1997. This comic book-themed film could become the underground Scott Pilgrim vs. The World, an instant cult hit that was in part a Canadian production. Before the film enjoy a glass of La Fin du Monde (The End of the Earth), a strong Belgian-style trippel from one of Canada’s most beloved brewers, Unibroue.

Raise a glass of bold American whiskey and cheers the body of work that Stanley Nelson Jr. has brought to the Milwaukee Film Festival. The recipient of the Festival Tribute this year, his films on the civil rights movement have expertly explored what it means to be black in America, yesterday and today. Freedom Summer was a highlight of last year’s program and this year he brings his most timely feature, The Black Panthers: Vanguards of the Revolution.

Just watching the trailer for My Love, Don’t Cross that River brought me to tears, at nine in the morning no less. The most successful Korean indie film of all-time takes us into a small mountain village where “100-year-old lovebirds” Gyeyeul Kang and Byongman Jo adoringly spend their days together, eventually facing the reality that time is not on the side of their lengthy love affair. After this documentary you may need a few bottles of Bell’s Two Hearted Ale to wash down the tears.

The three Milwaukee Shows (including the Youth Show) are always festival favorites but this year they’ve added the Milwaukee Music Video Show. Featuring 16 videos from a range of hometown musicians, this program will showcase the renaissance currently happening in our local music scene and the equally talented filmmakers producing compelling visuals to match those sounds. Pairs well with Lakefront’s Riverwest Stein, Lakefront IPA, MKE’s Louise Demise, Miller High Life, Old Milwaukee or any other local beverage.

I’ll be back next week with a new happy hour, Milwaukee Film Festival Community Partner Story Hill BKC, and more film/drink pairings for the second half of the Fest. 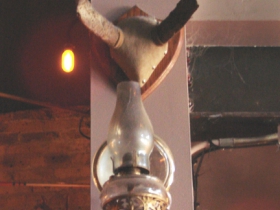 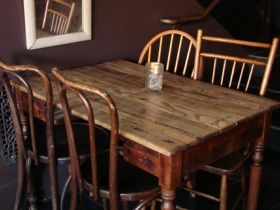 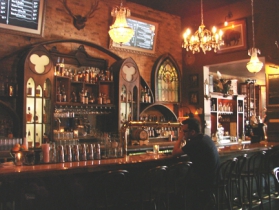 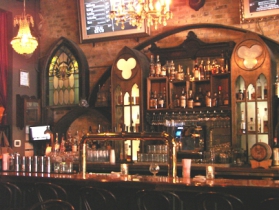 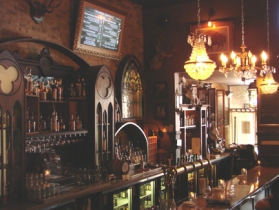 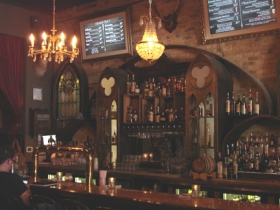 One thought on “Weekly Happy Hour: Hotel Foster (The Sequel)”