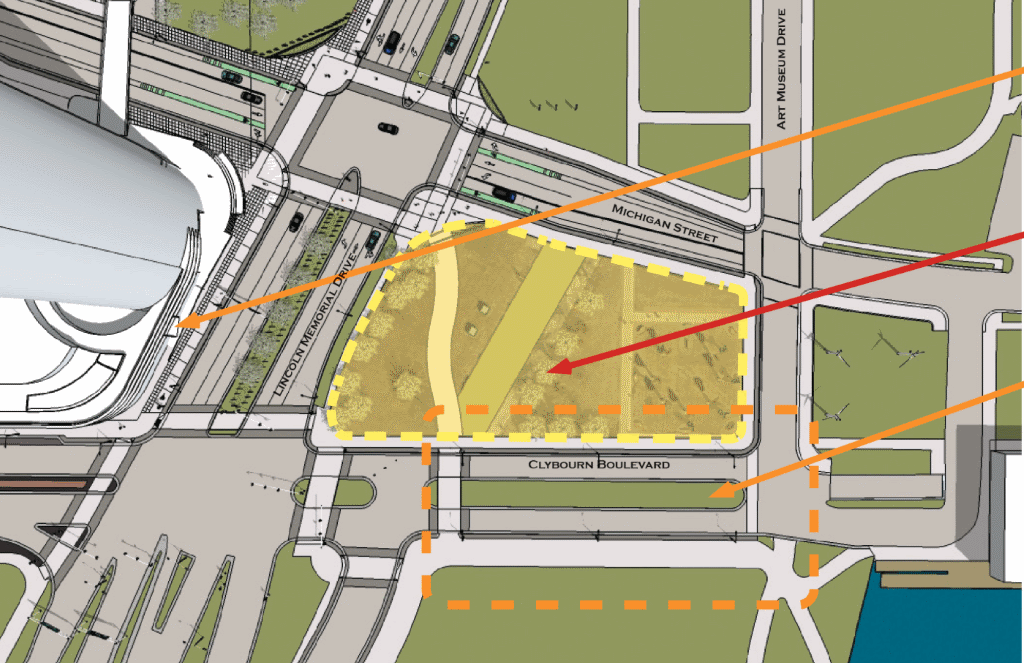 The City of Milwaukee recently and rather quietly announced the four finalists for the National Lakefront Gateway Plaza Design Competition. If this $30 million project goes forward, which is by no means a done deal, it may be the mark Mayor Tom Barrett leaves on Milwaukee’s landscape that could at least fit in the same sentence with Mayor John Norquist’s River Walk. Two mayors connect Milwaukee to two different bodies of water.

The design competition is for a pedestrian bridge that became necessary when the state Department of Transportation and the city agreed to significantly widen Lincoln Memorial Drive to make room for more cars instead of people along the lakefront. 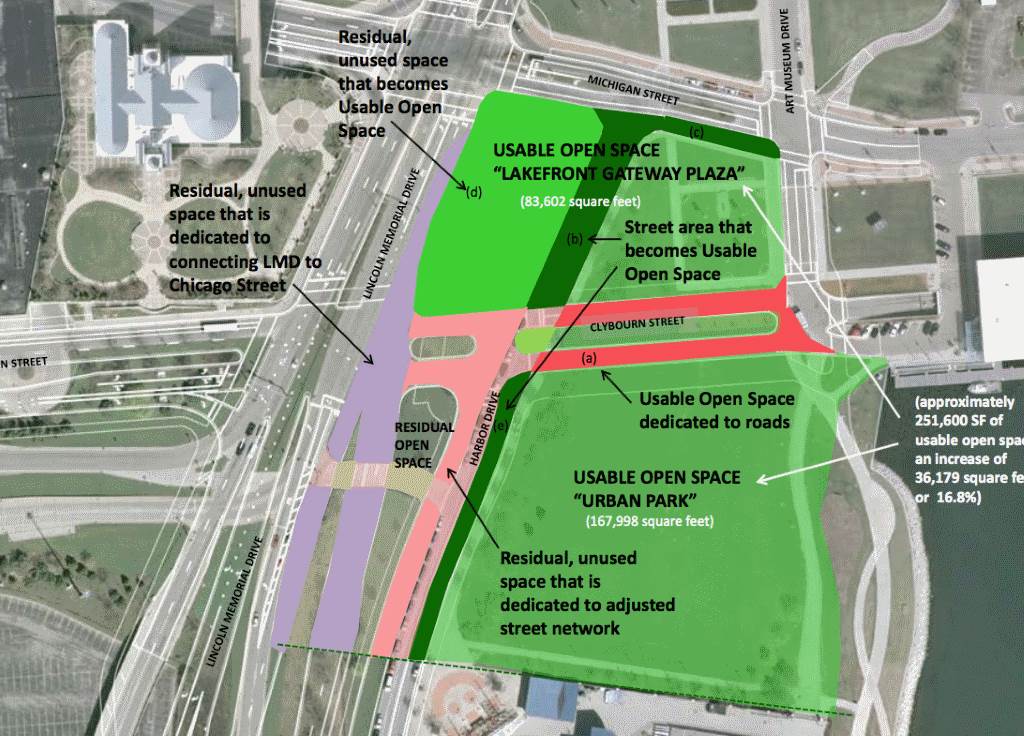 The bridge will cross Lincoln Memorial from a green space just east of the proposed Couture and land just west of Discovery World. The bridge will be right in the middle of all the shiny new development in Milwaukee, which includes the Northwestern Mutual Tower, not to mention Lake Michigan.

Calatrava’s bridge from O’Donnell Park to the Art Museum was the first step in the century-long struggle to connect Downtown to the lake. It’s this pivotal site that has attracted national talent to the competition. You can look the finalists and vote for your favorite plan here. A more complete exposition of the proposals will be at City Hall in the fall.

Filling a site of this stature will be a challenge for the Barrett administration, which has never successfully worked with national talent from the design world. The winner of the only other national design competition, Stoss Landscape Urbanism, which created a plan for Erie Plaza in the Third Ward, was asked to make significant changes to a once-excellent design. That’s a long and disappointing story, but let’s just say the Barrett administration and Department of City Development (DCD) have yet to truly execute a design of national caliber. 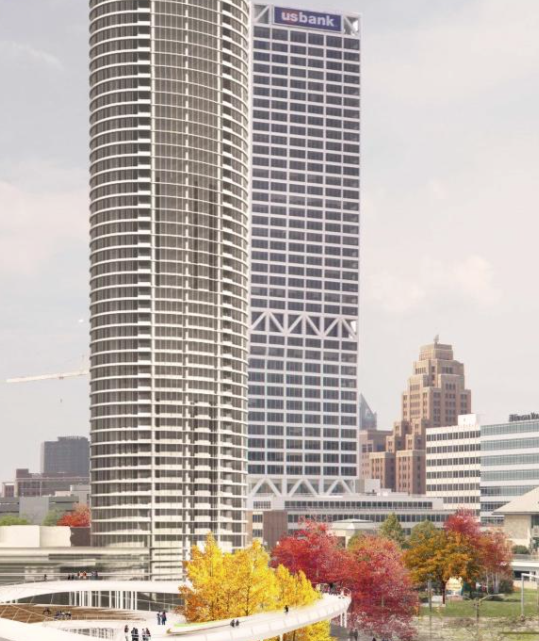 The Gateway Project is much more daunting. There are still some loose ends, starting with The Couture, where the bridge originates and whose developers still need to raise money for the project. And this will be the first time Barrett tries to raise significant private funds to create a new civic space; the way the some of best public spaces, Millennium Park in Chicago and the High Line in New York, were funded. The Calatrava addition to the Art Museum is a similar story. It takes a crazy good idea, something special to inspire the elite of our city to pony up the 25 to 35 million dollars (the cost parameter that design entrants were asked to work within) to complete a project like this.

Your vote “will be taken into consideration” by a secret panel of “stakeholders” according to Vanessa Koster, planning manager at the Department of City Development. Koster elaborated in an email: “Projects of this magnitude are achieved by involved stakeholders — which we engaged in the process — coalescing around the downtown comprehensive plan vision.” Whatever that means.

In off-the-record conversations with sources, it’s become clear the “stakeholders” are the neighbors who have a direct economic interests in the property, such as The Couture, Art Museum, and Discovery World for starters. That suggests the city is treating this space more like a real estate than a public good in the form of a park. Barrett’s spokesperson Jodie Tabak tells Urban Milwaukee “the panel has representatives from neighboring institutions and people with strong credentials in design. Until the panel finishes its review, we are keeping the members’ names confidential.”

I asked Koster if the panel included anyone representing the public-at-large who, say, uses the lakefront on a Sunday afternoon?  She wouldn’t say, or even reveal how many people are on the panel.

Koster says the secrecy preserves the “integrity of the RFP evaluation process.” She says they modeled the process on “other national competitions such as the High Line in New York, Millennium Park in Chicago and the St. Louis Arch.”

But the St Louis Arch was a public process and the seven-member jury that chose the design was publicly revealed. The High Line was a partnership between the community organization “Friends of the High Line” and the city, who chose the designers. It was a more open and broader-based process than Milwaukee’s. Millennium Park was done the Chicago way, ramrodded by Mayor Richard Daley, but he put a trained architect in charge, Edward Uhlir, who had served for years as chief architect of the Chicago Park District, and also consulted curators at the Art Institute of Chicago.

Important public projects like this usually aren’t conceived in secret. More transparency in government wards off suspicion of back-room deals and conflicts of interest. For example, the architect for The Couture just happens to be one of the finalists. City officials insists the project will go forward without The Couture, but it’s the linchpin of the project. Jeff Fleming, spokesperson for DCD said they have “taken precautions to insure there is not a conflict,” but declined to say what those were.

Working behind closed doors is probably a fundraising strategy rather than a safeguard for the “integrity” of the process. It seems like an implicit pay-to-play situation. Unlike the High Line, which had a community-based nonprofit organization and a strong mayor who raised money, the city will likely first go back to the stakeholders for large contributions.

It sounds like the city will be relying almost entirely on private money to fund the project. “Financial contributions from outside government are essential if the project is to move forward,” Tabak says. “City government has made an initial investment in the stipends for the finalists [each finalist was paid $20,000 to complete their proposed design], but city government will not be in a position to finance the entire project.”

The chosen design — and designer — could be crucial: it could play a huge role in how successful the city is raising money for the project.

There are four finalists for the design competition. Who will win? Which one of the four entrants offers the best design?  In my next story I’ll answer both questions.