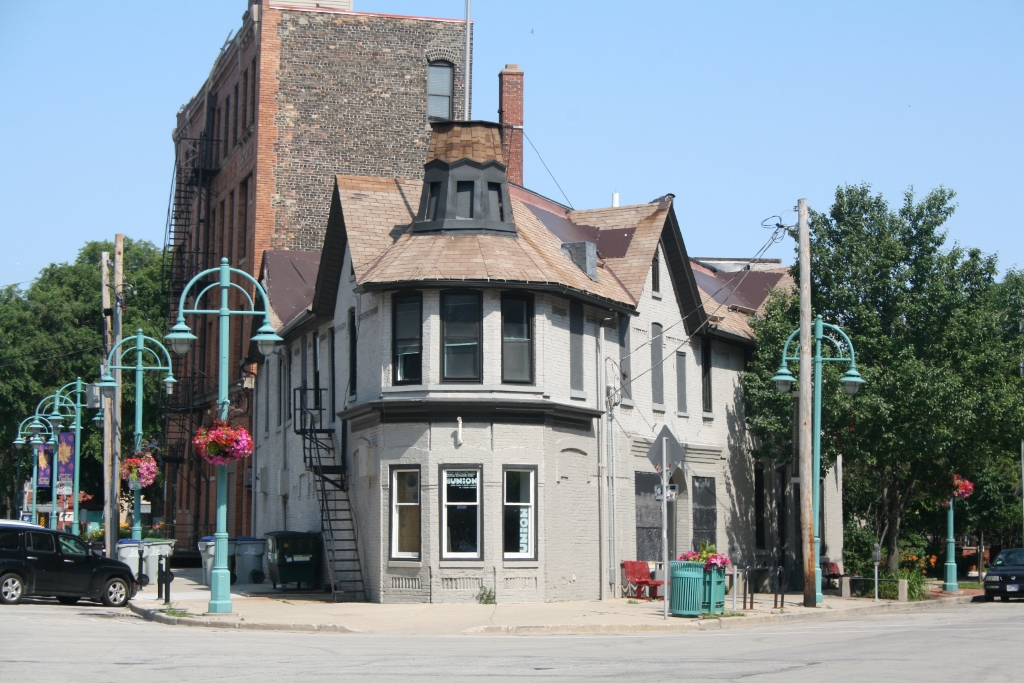 The Architectural Review Board of the Historic Third Ward met on Wednesday and deferred a vote on a further Historic Designation for what is now known as the Catherine Foley — Miller Tavern building at 266-272 E. Erie St.

Developers General Capital Group and Joseph Property Development bought the former MIAD student union last year with plans to tear down the old building that had served in many functions over the years, including a decades-long run as an early gay bar in Milwaukee. A fire and other structural changes over the years had seriously compromised the building, the owners say. But a Common Council committee file approved last month includes a historic designation for the property. That move was championed by Ald. Bob Bauman, whose district encompasses the site and who is also the chairman of the Third Ward ARB.

However, Bauman was not at the ARB meeting, and his seat was taken by vice chair Matt Jarosz.

Things went simply enough during a presentation by Carlen Hatala, the preservation officer of the City of Milwaukee. She read from her study report on the building, and told attendees that it met three criteria for historic designation.

Hatala said there had been a whole block of rooming house-saloons like the Foley property at one time, all run by Irish widows. It is the oldest standing building in the Historic Third Ward with direct ties to the Irish, who were the original settlers of the area. The intent of the designation, she said, was “to preserve the building we see,” that is, to retain its shell.

If the ARB were to not approve the historic designation, the matter would not go to the full council, she said, and the building would not be so designated by the city. But approval would move jurisdiction from the ARB to the Historic Preservation Commission, removing the Third Ward from deliberations about the future of the site. A reason to move forward would be the threat of demolition, Hatala said, since the ARB cannot halt a demolition permit, while the HPC can.

In the past, designated buildings have been torn down, including the Gipfel Union Brewery, Sydney HIH and parts of the Pabst Brewery. In some of these instances, the empty buildings had deteriorated beyond the ability to save them, and this fate could befall the old rooming house – tavern, which by all accounts is in rough shape.

It became clear as the meeting went on that there were jurisdictional and procedural issues that would need to be addressed by the City Attorney. Could the ARB act alone? Or would approval of the full Third Ward board be required? Was the ARB meeting itself properly noticed?

Jarosz said there were a half dozen items that needed clarification. He also said it was important that the ARB “keep some skin in the game” as the site is developed. As early as 1983, when it still operated as the Wreck Room, the tavern had been listed as a “pivotal” location within the greater Historic Third Ward district, and the building is certainly a counterpoint to the much larger buildings that surround it. The matter was adjourned for further consideration after consultation with the City Attorney’s office. 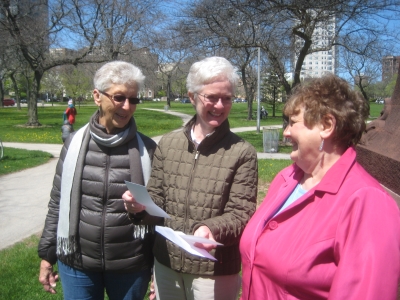 Lisa Hatch accepts the $7,000 check from the Sons of Norway Fosselyngen Lodge. Photo by Michael Horne.

The Sons of Norway Fosselyngen Lodge donated $7,000 to Juneau Park restoration efforts on Wednesday. Accepting the check from Milt and Nancy Sande at the statue of Leif Erikson was Juneau Park Friends president Lisa Hatch and park volunteer Sandy Duffy.

The Norwegians consider the statue to be “our statue,” Nancy Sande said, and the lodge was one of the sponsors of its 1995 move and restoration, as a plaque affixed to the 1887 Anne Whitney work attests. The lodge also donated $3,800 to the lighting of the sculpture in 2003.

Hatch said the parks group has plans to use the funds to install plantings on the steep bluff that forms the east boundary of the 14-acre park.

Some of the money may be directed toward eliminating invasive species in the lakefront park. Much has already been done down the bluff from the great explorer, yet within feet of his bronze sculpture grow Buckthorn and Garlic Mustard that a responsible program of landscape maintenance would have never permitted. You can help do your part by joining the Juneau Park Weed Out, May 30th from 9 a.m. to noon. Meet at the statue, and again En Tusen Takk to the Sons of Norway for their gift — make that Sju Tusen Takk! … Further north along the bluff, work at landscape improvements below the Jewish Home inexplicably spared boxelder trees That is no improvement, at all.

Our Aldermen in Action

Also on Wednesday, Common Council President Michael Murphy announced projects to fund playground improvements in 12 neighborhoods with the assistance of the Zilber Foundation. This is good news for fabricators of fences, since the measure seeks to replace ugly chain link with more substantial enclosures, among other improvements. 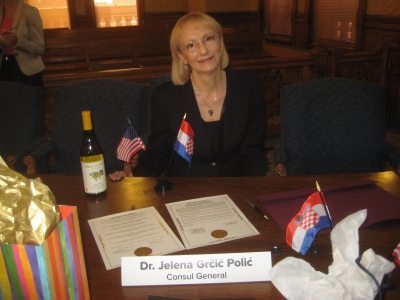 Meanwhile, Ald. Nik Kovac presided Monday at an event at City Hall. Kovac was a sponsor of a measure to create a Sister City alliance with Zadar, Croatia. Present was Dr. Jelena Grcic Polic, Consul General, and Head of Mission of the Chicago consulate, one of eight beachheads the Eastern European nation has established on our shores.

Our new sister city is Zadar, Croatia, a town whose history considerably predates ours, and whose travails have included onslaughts by Neretvian Pirates [A.D. 998], mischief 500 years afterward by Sigmund of Luxembourg and later Ladislaus of Naples. Neighboring communities include Babindub, Crno, Kožino and Petrčane, as well as the islands of Ist, Iž, Molat, Olib, Premuda, Rava and Silba.

What the event lacked in pronouncability it more than made up for in cuisine, with an ample buffet provided by American European Foods. This city has abundant ethnic foods, that’s for sure. Entertainment was thanks to the Croatian Tamburitzen players, who made the most of the council chamber’s sonorous acoustics. Kovac, by the way, noted that he shares the same name — spelling and all — as the coach of the Croatian National Soccer team.

Last week, on May 7, Kovac held a fundraiser at Von Trier‘s, drawing a number of constituents and others to his “Nik on North” event. Attendees included fellow Common Council members Michael Murphy and Jose Perez, Sen. Chris Larson, Rep. Jonathan Brostoff, Rep. Dan Riemer and the alderman’s parents, Peter and Thea Kovac. Meagan Holman also made an appearance at the event. The former member of the Milwaukee School Board is Riemer’s legislative aide, and has announced plans to run for the 14th Aldermanic District seat held by Tony Zielinski. The Bier Stube was filled with supporters enjoying authentic German appetizers prepared by von Trier’s chef. Will Teutonic cuisine be the next to have a renaissance? If so, it may have started here. My goodness, the stuff goes good with beer, especially the free Lakefront Riverwest Stein beer provided free by the campaign.

Council President Murphy said the two best decisions he has made in his position was to appoint Kovac Chair of the Finance and Personnel Committee and Perez vice chair of the Zoning Neighborhood and Development Committee. This statement, of course, was leading up to a punch line about the best decision to come out of City Hall this year: “The best decision was Nik asking Grace [Fuhr] to marry him.” The two plan to wed at Haertel’s Best Place at the Pabst Brewery in July. Haertel says things are running nicely at his place, and that he welcomes the new businesses near the old brewery. “I invented a new word,” he said. “I call it ‘completion’. We work together to create a vibrant area.”

In his remarks, Kovac said the commercial areas of his district are strong, mentioning E. Center St., E. Locust St., E. North Ave., and E. Brady St. in particular. He said he feels confident that the N. Downer Ave. district will rebound once its real estate ownership problems are solved.

Photos from the Fundraiser 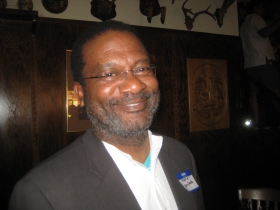 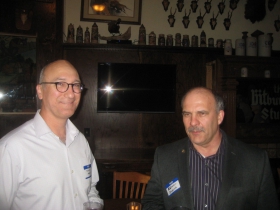 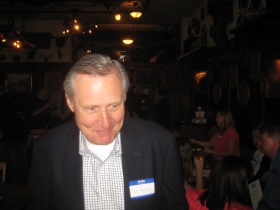 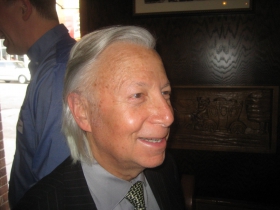 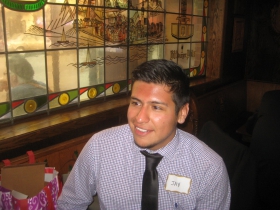 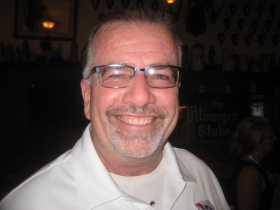 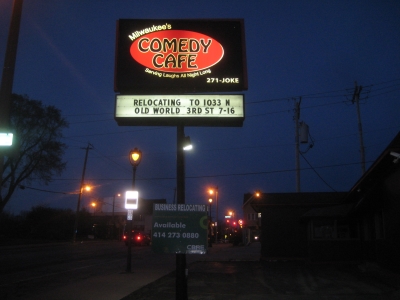 The Comedy Cafe is moving. Photo by Michael Horne.

The Downer Avenue Business Improvement District #41 no longer employs Jake Provan, who had headed it from the time it was founded in 2007 until January this year, when his job was taken over by Steph Salvia, who also runs the Brady Street BID. Provan, who was employed by Joel Lee‘s Van Buren Management Company while he ran the BID, has decamped to Brandon, Florida, where he is the strength and conditioning coach for a soccer team. Mike O’Connor and Michael DeMichele both took seats on the seven-member board in April….

The Republican Party of Wisconsin has announced its “Red to the Roots Movement.” Does that mean the GOP is going to get beet?

… The Comedy Cafe, 615 E. Brady St. is for lease, a sign on the building announces. The club will relocate to Tutto, 1033 N. Old World Third St. after its final show on June 20th. Both buildings are owned by Giovanni Safina.

4 thoughts on “Plenty of Horne: Will Historic Building in Third Ward Be Saved?”