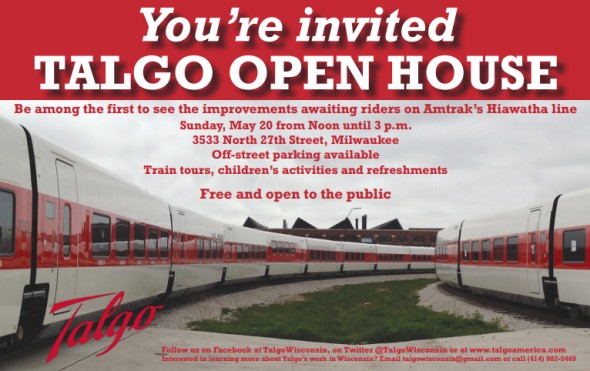 The elegant Talgo trainsets ordered by the Doyle administration for the Amtrak Hiawatha are nearly complete. But will they ever be used?

Alas, Sunday is quite possibly the only day you will ever get to go inside them. Tours, children’s activities, and refreshments will be available at the Talgo assembly facility from noon until 3 p.m. on Sunday, May 20th. The facility is located in the Century City redevelopment area at 3533 North 27th Street. Off-site parking is available, with MCTS Routes 27 and 80 getting you there as well.

If you can’t make it Sunday, the trainsets are also currently visible from south side of the facility on W. Townsend Avenue between 27th and the railroad bridge.

Strategically ordered before federal high speed rail grants were announced, the purchase contract pushed Wisconsin to the top of the list and netted Wisconsin $810 million to extend the Hiawatha to Madison and buy more trainsets. Governor Walker‘s campaign against the poorly marketed train resulted in the federal government re-appropriating the funds to other states.

The trainsets face an uncertain future following the State Legislature’s Joint Finance Committee decision to cancel funding for a permanent maintenance base for the equipment. It remains unclear if the state will put the trainsets into service utilizing the temporary maintenance base (the assembly facility), or mothball the trainsets once they’re complete (potentially violating their contract with Talgo).

Hopefully someday the trainsets will be in use in Wisconsin. Until then I’ll just shake my head at the insane series of decisions taken merely to score political points. I do look forward to seeing our former high-speed rail funds at work when I take the Amtrak Lincoln Service, a corridor being upgraded to higher speed rail, to St. Louis this summer.

The parking lot between 4th and 5th streets on the south side of Wisconsin Ave will finally see some activity this summer thanks to a handful of groups working to change the way Wisconsin Avenue is perceived (starting with rebranding it the WAM District). First up is a tailgate party hosted by Pabst Theater and NEWaukee on May 25th that includes the live broadcast of a Milwaukee Brewers game. The Downtown Baseball Block Party has live music starting at 6:30, a live broadcast by the FSN broadcasting team, food trucks for those that don’t bring their own grills, and a cash bar. The fun will go until midnight. There is a Facebook event with more information.

Another event is planned for June 14th in conjunction the Milwaukee IndyFest race. The Milwaukee IndyFest Street Party will kick off the three-day event that culminates in an internationally televised IndyCar race at the Milwaukee Mile. The kickoff event will include a car show, House of Harley-Davidson parade, driver appearances, food trucks, and beer stations.

While I would have rather seen the proposed Catalyst development by the Ghazi Company occupying this parking lot, I’m thrilled to see groups programming the space for more than just parking. NEWaukee and the Pabst Theater have a history of drawing thousands of people to their events (Young Professional Week, Fish Fry and a Flick). Hopefully this is just the start of good things to come for Wisconsin Avenue.

Bike Use on Buses Doubles

A press release by the Milwaukee County Transit System shows bike use is growing by leaps and bounds. County buses transported 95,000 bicycles in all of 2011, but through April 30th of this year, over 29,000 bicycles were transported, more than double last year’s numbers through the same period (12,695). Whether it’s this year’s mild weather or increased awareness that is driving the increased usage, it’s encouraging to see ever more cyclists take advantage of the racks.

For more information on how to put utilize the racks, see the MCTS webpage and video Bikes on Buses.

Historic Milwaukee’s annual Spaces & Traces event features the Historic Concordia neighborhood this Saturday from 9 a.m. to 5 p.m., with tours of 13 historically prominent residences and businesses in the near west side neighborhood. Tickets to the event are $25 , and $20 for HMI members and there’s a five dollar price increase if you wait till the the day of the event. Also included are a lecture by John Gurda about the architectural and cultural history of the neighborhood (at 11:00 a.m.), one by Alderman Robert Bauman, a long-time neighborhood resident, on living in and representing the neighborhood (1 p.m.), and a special Miller Brewery tour (4 p.m.) More information is available on the Historic Milwaukee website.

Kudos to HMI for their efforts in putting on the annual Spaces & Traces event, which allows for an up close look at Milwaukee’s history.

The University of Wisconsin-Milwaukee was granted a zoning change for the former Columbia Hospital that will allow the school to expand into the complex of buildings now known as the Northwest Quadrant (file #101472). The university acquired the complex in December 2010.  This change allows UWM to fully use the former hospital as part of the university campus. Various pieces of the complex are already in service given that they comply with existing zoning regulations (parking garage, coffee shop, and offices).

As part of the zoning change, UWM Chancellor Michael Lovell voluntarily agreed to cap the number of students living in the former Columbia College of Nursing building at 90 Honors students (UWM leased a portion of the building for student housing in the past). Should the university wish to expand the number of students living in the Honors College facility to 200 in the next ten years, the university will first seek a public hearing and advisory ruling by an appropriate City body. Prior to the end of the ten year period UWM will consult with the Mariner Neighborhood Association or any successor, and the appropriate City body to determine if the commitment should be extended. We have re-posted the statement from Chancellor Lovell for your convenience.

The only vote against the zoning change was cast by Alderman Bauman. Bauman wants to see UWM place student residences throughout the city instead of concentrating them on the Upper East Side campus.

I believe the growth of UWM as a top-tier university is good for the city as well as the school, and am happy to see a resolution was found to neighborhood concerns about the university’s expansion. If only this land could have been used for an engineering school, as opposed to a new campus being created in western Wauwatosa.

This information was presented before the Zoning, Neighborhoods, & Development committee. Alderman Michael Murphy noted that “the project is ahead of schedule, under budget, and is a beautiful building.” Committee Chair Alderman Jim Bohl added “this has been a very big success, and we will continue to build off of it.”

More information is available in the report presented to the committee, or on the file in Legistar (#120016).

Children ages 2 to 15 can ride free on the Amtrak Hiawatha on Fridays, Saturdays, and Sundays between June 1st and August 26th. Up to two children can receive free tickets when accompanied by a paid full fare adult. To claim the offer use discount code V813.

I’ve written a column in the past asking for more creative pricing for the Hiawatha (Amtrak Should Innovate with Hiawatha Service Pricing). This is a step in the right direction.

If you’re looking for the Openings and Closings section of Eyes on Milwaukee, you will need to hold off for a few days. We’re spinning the section off into its own piece to debut in the next week.

11 thoughts on “Eyes on Milwaukee: Tour the Talgo Trains You Might Never Ride”