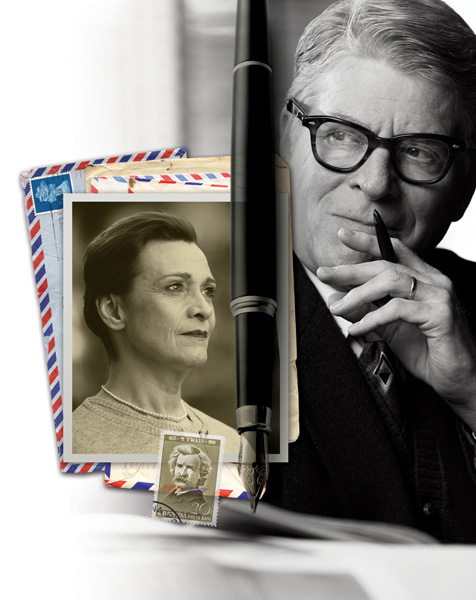 Robert Lowell and Elizabeth Bishop were bright, shining stars in the literary world. And from 1947 to 1977, these award-winning poets exchanged more than four hundred letters. Whether vividly recounting the roller coaster nature of their romantic entanglements, affirming their profound affection for each other or describing their daily writing, travels and illnesses, these missives are an intimate and astonishing record of two extraordinary lives.

Playwright Sarah Ruhl was inspired to write DEAR ELIZABETH after reading Words in Air: The Collected Letters of Elizabeth Bishop and Robert Lowell.  Already an ardent fan of Bishop’s, Ruhl quickly fell in love with Lowell’s writing, both in the way he spoke to Bishop in his letters as well as his poetry.  She was captivated by the friendship between the two poets and created this insightful play based on one of the greatest correspondences in literary history. DEAR ELIZABETH premiered at Yale Repertory Theatre in 2012.

Elizabeth Bishop (1911-1979) attended Vassar and lived in various places around the world until settling for a period of time in Brazil after meeting Lota de Macedo Soares, a Brazilian architect who became her lover for over a decade. Bishop was shy and often reclusive, publishing only 101 poems in her lifetime, and would often take years revising a single poem. After 14 years in Brazil, she returned to the United States to teach. Although she was not as popularly known in her day, Bishop was well respected by critics and is now regarded as an important and influential poet in American literary history. She received the Pulitzer Prize for Poetry in 1956 for North & South/A Cold Spring.

Robert Lowell (1917-1977) received an undergraduate degree from Kenyon College and did his graduate work at Louisiana State University. Originally a poet conforming to formal meter and structure, Lowell began writing more personal and free form poetry in the 1950s at the prompting of his doctors who treated him for manic-depression. The result was Life Studies (1959), an intimate, biographic volume that helped to found the Confessional poetry movement. He spent most of his adult life as an English professor at various colleges, and among his students was Sylvia Plath. Lowell was very prolific, he won his first Pulitzer Prize for Poetry in 1947 for Lord Weary’s Castle and his second in 1974 for The Dolphin.

In 1947, Bishop and Robert Lowell met through Randall Jarrell, poet and critic, and began their 30-year friendship. While they frequently exchanged letters, they rarely met in person. Perhaps their most famous meeting was in July of 1948 when they spent a weekend in Maine, a trip they would refer to later on in their correspondence. They also conversed not only about their lives, but about their work and process as well. While their styles varied dramatically—Bishop taking a casual detached tone with keen precision of language and Lowell less strict and highly personal with his Confessional style—they respected and admired one another as poets, going so far as to dedicate poems to each other. Despite occasional clashes and tumultuous personal periods, they continued to write each other with the last letter dated August 2, 1977, a little more than a month before Lowell’s death. Bishop wrote Lowell’s epitaph, a poem entitled “New Haven.”

Veteran Milwaukee actors – and real-life married couple – Carrie Hitchcock and Norman Moses return to Milwaukee Chamber Theatre as Elizabeth Bishop and Robert Lowell. Married for 29 years, DEAR ELIZABETH marks the first time the couple has performed together on stage in Milwaukee in over 10 years. Both Hitchcock and Moses made their Milwaukee Chamber Theatre debuts over 30 years ago and both have performed in over 20 productions with the company (including multiple productions together).  However, DEAR ELIZABETH is the first two-actor production they have performed in at MCT.

Carrie Hitchcock returns to the Milwaukee Chamber Theatre where she made her debut over 30 years ago in THE DINING ROOM. She has performed in over 20 MCT productions including DINNER WITH FRIENDS, A HOTEL ON MARVIN GARDENS, HEARTBREAK HOUSE, NIGHT OF THE IGUANA, WHO’S AFRAID OF VIRGINIA WOOLF?, THREE TALL WOMAN, SAINT JOAN and CLARENCE. Hitchcock recently returned to acting after a 10 year hiatus working as a full time registered nurse. Her recent roles include the Nurse in ROMEO AND JULIET and Sebastia in THE TEMPEST with Door Shakespeare, Lotte Schoen in LETTUCE AND LOVAGE at Renaissance Theaterworks and Val Hawthorne in the world premiere of COME BACK at In Tandem Theatre. She has also worked with Next Act Theatre and Skylight Music Theatre and appeared in the independent films, Expecting Mercy, Wishtaker and No Names.  She is a graduate of the Professional Theatre Training Program at UW-Milwaukee and is married to actor Norman Moses.

A veteran of the Milwaukee theatre scene for over 35 years, Norman Moses returns to MCT where he has appeared in over 20 productions including JEEVES IN BLOOM, AROUND THE WORLD IN 80 DAYS, TALKING HEADS, THE FOURTH WALL, DINNER WITH FRIENDS, A HOTEL ON MARVIN GARDENS, HEARTBREAK HOUSE, WHO’S AFRAID OF VIRGINIA WOOLF?, CLARENCE and BEYOND THE FRINGE. Other notable roles include Charles II in OR at Forward Theater, Avery in PRECIOUS MEMORIES at Milwaukee Repertory Theater, Don Armado in LOVE’S LABOUR’S LOST at Milwaukee Shakespeare, Antoine in THE HOUSE OF MARTIN GUERRE at Goodman Theatre, Harold Hill in THE MUSIC MAN at Skylight Music Theatre, Henry in SYNCOPATION at Renaissance Theaterworks and Groucho in GROUCHO, A LIFE IN REVUE at Next Act Theatre. He is a graduate of the Professional Theatre Training Program at UW-Milwaukee and is married to actor Carrie Hitchcock.

A member of Milwaukee’s professional theater community for three decades as actor, producer, playwright, director and dramaturg, Marie Kohler makes her Milwaukee Chamber Theatre directing debut with DEAR ELIZABETH. She has performed with MCT in GHOSTS, THE PHILANDERER and MURDER IN THE CATHEDRAL.  A proud Renaissance Theaterworks co-founder, Kohler served for 20 years as co-artistic director and as resident playwright. Her plays THE DIG, BOSWELL’S DREAMS, MIDNIGHT AND MOLL FLANDERS and COUNTING DAYS premiered there. She’s also directed HONOUR, THE KREUTZER SONATA and  A PHOENIX TOO FREQUENT for Renaissance.  She was raised in Wisconsin and holds a BA from Harvard University and an MA from UW-Milwaukee.  Named “Artist of the Year 2005” by Milwaukee Arts Board, she currently serves on the Wisconsin Humanities Council and writes for Shepherd Express. 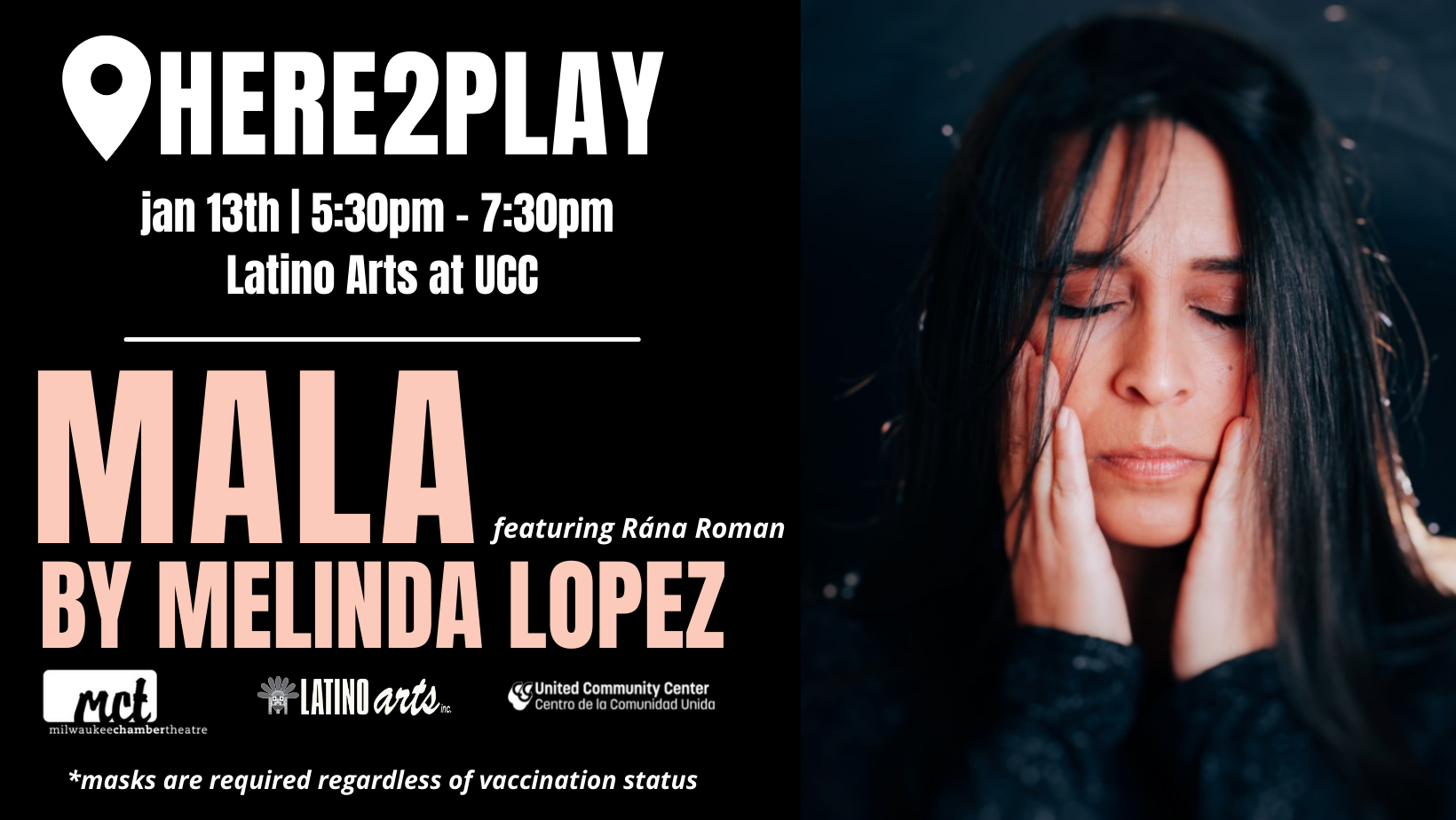