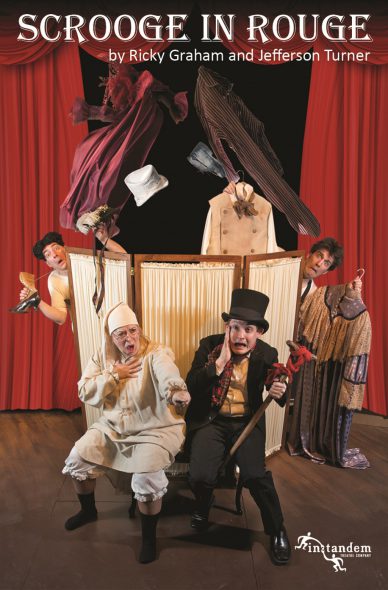 October 30, 2017 [Milwaukee] –In Tandem Theatre is thrilled to bring back the uproariously funny musical Scrooge in Rouge by Ricky Graham and Jefferson Turner at the Tenth Street Theatre, 628 N. 10th Street from December 1, 2017 – January 7, 2018. Back by popular demand, the show ran three consecutive seasons to sold-out houses in 2009-2011. Tickets ($30) are available by calling the Tenth Street Theatre Box Office at 414-271-1371. Senior, student, military and group discounts are available. Visit www.intandemtheatre.org for more information, including dates and times, and to order tickets online.

A troupe of 23 players are about to embark on a musical adaptation of A Christmas Carol when 20 of them come down with food poisoning, leaving only three to put on the entire show! Fast-paced and funny, this bawdy, raucous musical set in a British music hall at the turn-of-the-century, features quick character changes and even quicker costume conversions.

The 2017-18 Scrooge in Rouge features a brand new cast of talented local actors:

In Tandem Theatre is pleased to collaborate with Hunger Task Force on this production to collect non-perishable food items at performances as part of its Community Partnership initiative.

PERFORMANCE DATES FOR SCROOGE IN ROUGE: