Scholz has served in numerous leadership roles at University since 2004 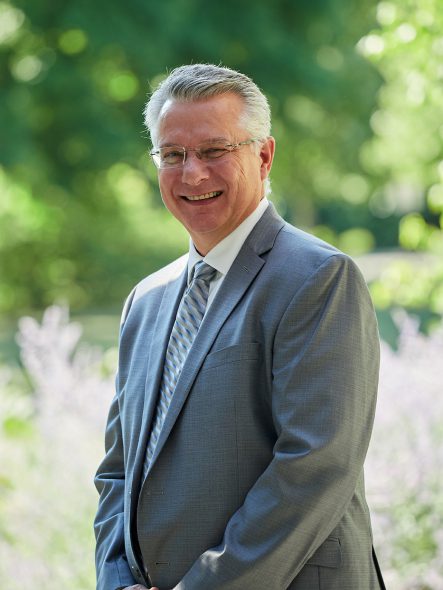 MILWAUKEE – The Cardinal Stritch University Board of Trustees unanimously recommended to the leadership team of the Sisters of St Francis of Assisi that Dr. Dan Scholz be named University president effective immediately. The leadership team of the Congregation has accepted the recommendation and Dr. Scholz will serve as the University’s 10th president in the institution’s 84-year history. Scholz has served as Stritch’s interim president since August 1, 2020, and at Stritch since 2004.

“We accept the recommendation from Cardinal Stritch University’s Board of Trustees and know that Dr. Dan Scholz will continue to provide the exemplary leadership he has demonstrated over the last 13 months as interim president and over 17 years in a number of essential roles at the University,” said the leadership team. “During his career at Stritch he has lived out a sincere commitment to the legacy upon which the University was founded. His vision for the future of Cardinal Stritch University will ensure future generations of students will have access to a transformative Catholic, Franciscan education.”

“Dr. Scholz has shown tremendous leadership during his career at Cardinal Stritch University, and in particular over the last year amidst the global pandemic,” said Board co-chairs Dr. Mary Kellner, ’07, and Gerard Randall. “He demonstrated a student-first focus that permeates the University community. We are confident he will continue to build upon the University’s legacy and ensure a transformational liberal arts education in the Catholic, Franciscan tradition preparing students for a life of leadership and service.”

“I deeply appreciate the confidence the Board of Trustees and Sisters of St. Francis of Assisi have shown in me,” said Dr. Scholz. “I am honored to serve as the president of Cardinal Stritch University, which has educated thousands of students who are leaders in the communities where they live and work. For more than 80 years Stritch has been an integral contributor to the success of our state, region, nation and world. I am eager to continue working on behalf of our students with our faculty, staff, alumni and community members.”

Dr. Scholz has served as Stritch’s Vice President of Academic Affairs since 2018. He joined the University in 2004 and has served as a tenured faculty member and chair of the Religious Studies department, executive director of the Saint Clare Center for Ministry and Leadership, and dean of the College of Arts and Sciences.

A Milwaukee native, he has more than 35 years of teaching experience at high school, college and graduate school levels. He began teaching theology in 1985 at Pius XI High School where he also served as theology department chair for 10 years. He taught biblical studies at Saint Francis de Sales Seminary for six years before coming to Stritch.

Dr. Scholz earned a bachelor’s degree from the University of Wisconsin-Eau Claire in psychology and comparative religions in 1982 and a master’s degree in Christian theology from Mundelein College in 1985. He received a doctorate from Marquette University in 1997 in biblical theology. Dr. Scholz is an active member of the Catholic Biblical Society and the Society of Biblical Literature.

He has published three books with Anselm Academic:

He and his wife Bonnie have three adult children and belong to Christ King Parish in Wauwatosa.

About Stritch – Cardinal Stritch University is a fully accredited Catholic institution founded by the Sisters of St. Francis of Assisi in 1937. Stritch is one of the largest Franciscan institutions of higher education in North America and offers more than 60 undergraduate, graduate, certificate and professional development programs designed to help students develop new skills, gain career-related experience and build professional networks. Franciscan values are infused into the Stritch experience that prepares students of all ages, faiths, races and socio-economic backgrounds to succeed in the communities where they live, work, serve and lead.