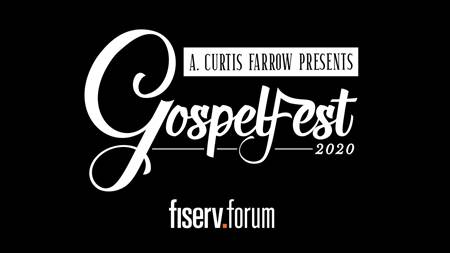 MILWAUKEE (Dec. 20, 2019) – The Emmy Award-winning producer and director of the renowned McDonald’s Gospelfest will bring A. Curtis Farrow Presents Gospelfest to Fiserv Forum on Friday, April 10, 2020. The first-ever Good Friday celebration at Milwaukee’s world-class venue will feature esteemed gospel artists and will serve as a showcase for local performers. Tickets will go on sale to the general public on Wednesday, Jan. 15 at 10 a.m., and can be purchased at FiservForum.com.

Before the headliners take the stage, nearly 100 local choirs and soloists will perform. Auditions will start the third week of January, and approximately 90 artists will be announced by Feb. 1. While the performers will sing gospel, spiritual or Christian music in the show, they are not required to belong to a church or ordinarily sing those genres in order to audition.

“Milwaukee has always been part of my heart,” Farrow said. “There is so much talent in Milwaukee, and we can’t wait to showcase the community’s gifts and talents at Fiserv Forum.”

Farrow is internationally known as the producer of the McDonald’s Gospelfest, which he has directed and produced for 20 years. Under his direction, McDonald’s Gospelfest has become the preeminent gospel event in the nation and has garnered him three Emmy awards and 14 nominations. Farrow was responsible for the organization, planning and execution of the homegoing services for the late Whitney Houston, and, most recently, he produced the homegoing services for the late Aretha Franklin, which was viewed around the world.

About A. Curtis Farrow

A. Curtis Farrow is internationally known as the producer of the McDonald’s Gospelfest, which he has directed and produced for 20 years. Under his direction, McDonald’s Gospelfest has become the preeminent gospel event in the nation and has garnered him three Emmy Awards and 14 nominations.

Farrow was responsible for the organization, planning and execution of the homegoing services for the late Whitney Houston, and, most recently, he produced the homegoing services for the late Aretha Franklin, which was viewed around the world. As a choir empresario in 2014, Farrow broke the Guinness World Record for Largest Gospel Choir at 1,175, which he followed with a 2,000-voice choir at Madison Square Garden in 2017 and a 5,000-voice choir at the Nassau Coliseum in 2018.

For the 20th year, Farrow brought his directing and producing talents to make McDonald’s Gospelfest 2019 the most successful and well-attended gospel event ever, its reach spanning the globe. Farrow has worked with every gospel great, including the Queen of Soul Aretha Franklin, Donnie McClurkin, Kirk Franklin, TD Jakes, Fantasia, Steve Harvey, Hezekiah Walker, Yolanda Adams, CeCe Winans and Vickie Winans.

Farrow was awarded the Global Marketplace Award in Johannesburg, South Africa, and he has received many honors for his business experience including a commendation from former Newark Mayor Cory Booker in 2011 and former Mayor Sharpe James in 2005, who proclaimed June 17, 2005 as A. Curtis Farrow Day. In 2009, he was named Man of the Year by the Christian Times, and he received a commendation from the Manhattan Borough President and the Public Advocate Award for New York City. A choir director since the age of 9, he has served as Minister of Music for Mt. Olive Missionary Baptist Church in Niles, Michigan, Metropolitan Baptist Church in Jersey City, New Jersey, and The New Hope Baptist Church in Newark, New Jersey.

Farrow is a veritable powder keg of energy and talent whose directing credits span the U.S. and abroad. His directing and producing credits include national tours of: “Ain’t Misbehavin’,” “Smokey Joe’s Café,” “Sophisticated Ladies,” “Five Guys Named Moe,” “Your Arms Too Short to Box with God,” “Godspell” and “Forever Plaid.” His productions are constantly met with rave reviews, and he is always credited with bringing the best of African American Broadway talent to regional theatres, universities and nightclubs.

Farrow credits everything in his life to his strong belief in God.

Fiserv Forum is a preeminent sports and entertainment arena in downtown Milwaukee that opened on Aug. 26, 2018. Designed by Populous, Eppstein Uhen Architects and HNTB, the venue offers incomparable sightlines, customer service, technology and amenities. Fiserv Forum includes 17,341 seats for basketball and up to 18,000 for concerts, with 34 luxury suites and three clubs. The new venue hosts a diverse variety of events, including the Milwaukee Bucks, Marquette University men’s basketball, major concerts, family shows and other sports and entertainment events, and has been selected to host the 2020 Democratic National Convention. More upcoming events in 2020 include the American Cup, Michael Bublé, Blake Shelton and Tame Impala. In addition to Fiserv, Founding Partners for Fiserv Forum include BMO Harris Bank, Froedtert & the Medical College of Wisconsin, Johnson Controls and Miller Brewing Company.