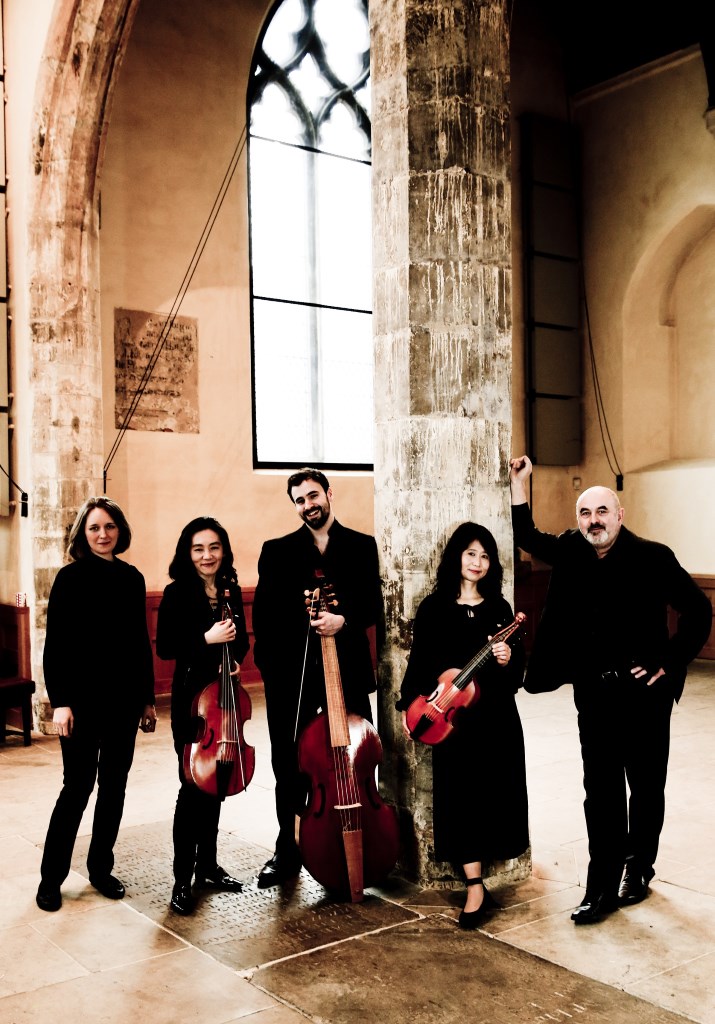 On October 8th, the British viol consort Fretwork opens a season of celebration for Early Music Now – 30 years presenting world-class performances of Medieval, Renaissance, and Baroque music in Milwaukee landmark buildings. The season of six exceptional concerts (and one extra!) showcases music with origins ranging from the 6th century to 2016, performed by world-class ensembles from London, Paris, Montreal, St. Paul, Cleveland, and Cuba!

With its customary mix of well-established audience favorites and artists new to Milwaukee, EMN creates lively connections with the past through historically informed performances of music composed before 1800. As in recent seasons, international artists and programs will also reach Across Borders – Across Time. Each half of the six-concert series provides a different perspective on the scope of early music, offering new sounds and fresh perspectives on our diverse cultural heritage.

The first half of the season presents three world-class ensembles that are already familiar to Milwaukee audiences: from England, France, and the United States. Each represents a different period and genre: 9th century Medieval vocal music, Elizabethan viol consort music (and the United States premiere of a new work for viols), and two performances of Christmas choral music of the Renaissance.

The season opens at 7:30 on Saturday, October 8th, at the Helene Zelazo Center for the Performing Arts (UWM) with the five members of Fretwork performing 16th- and 17th-century settings of “In Nomine” by Byrd, Gibbons, Lawes, Parsons, Purcell, Taverner, and Tye, as well as a 1995 setting by Gavin Bryars based on Purcell, and the first U.S. performance of a 2015 setting by American composer Nico Muhly. This performance is part of the London-based ensemble’s own 30th anniversary tour.

The second concert is on the date of EMN’s actual anniversary, November 19th, and will present the world-renowned ensemble from Paris, Sequentia ­– which previously appeared as the opening ensemble in EMN’s first full season (1987) and again in 2000. For this new program, Sequentia’s director Benjamin Bagby collaborates with noted scholar Sam Barrett (Cambridge University) to reconstruct classical texts that were sung in European monastic centers and cathedral schools between the 9th and 12th centuries, with sources dating back to the 6th century. There will be songs about Fortuna, Dido and Cleopatra, Hercules and the old gods, as they would have been enjoyed by monastic intellectuals around the turn of the first millennium. This 7:30 concert will be at Wisconsin Lutheran College’s Schwan Hall.

One of EMN’s all-time favorite ensembles will return for a pair of Christmas concerts at the glorious Saint Joseph Chapel (27th and Greenfield) on December 10th at 5:00 and December 11th at 3:00. The Rose Ensemble comes to us from St. Paul, after previous sold-out performances in 2002, 2008, 2010, and 2013. This holiday concert, “A Rose in Winter,” takes its theme from an ancient Christmas legend that describes a midnight blooming of all manner of plants, trees, and flowers. This miracle of new life amid the cold of winter is explored through splendid choral music honoring the Madonna and Child, including medieval English ballads, Spanish cantigas, German carols, and works of William Byrd and Jean Mouton.

The second half of the season presents outstanding ensembles new to Milwaukee – in fact, one will be making its North American debut! With artists from Cuba, Canada, and the United States, the historic progression continues with colonial music from the Hispanic Americas, Appalachian music with its roots in the British Isles, and a French Baroque musical murder mystery!

A four-day Milwaukee residency represents the culmination of the dream of an extraordinary ensemble from Cuba to finally appear in America. Ars Longa de La Habana has been performing to rave reviews throughout Europe and Latin America since 1994. Due to the relaxing of U.S. relations with Cuba, Early Music Now has the honor of presenting their U.S. debut performance at 5:00 on Saturday, February 18, 2017 at the Helene Zelazo Center for the Performing Arts (UWM). This 17-member ensemble will present “Gulumbá, Gulumbé: Resonances of Africa in the New World” – a program of 17th- and 18th-century music from the colonial period in the Americas, resonating with strong influences from African culture. The program includes music of Fernández, Salgado, de la Rocca, and of course, Anónimo (17th century), performed with viola da gamba, flautas dulces, chirimías, sacabuche, bajón, Baroque guitar, and chamber organ.

Another Milwaukee debut performance comes from Cleveland – members of Apollo’s Fire will bring their award-winning program “Sugarloaf Mountain” to the UWM Zelazo Center on Saturday, March 18, at 5:00. Subtitled “An Appalachian Gathering,” this program explores music with its roots in the British isles that long ago mingled with Southern hymns and African spirituals in the hills of Virginia; performed by voices, hammered dulcimer, harpsichord, fiddle, wooden flutes, lute, guitar, banjo, and cello.

The season concludes at St. Paul’s Episcopal Church at 7:30 on Saturday, April 22nd, with an investigation of the murder of composer Jean-Marie Leclair (1697-1764) and an exploration of his music. “Who Killed Leclair?” will be performed by the young Montreal ensemble Infusion Baroque, Grand Prize winners in the 2014 Early Music America Baroque Performance Competition.

The third installment in a series of “extra” concerts featuring the clarinet in its various historic connections will be inserted between the two halves of the 6-concert series at 7:30 on Saturday, January 14th at Wisconsin Lutheran College. World-renowned clarinetist Eric Hoeprich will be joined by the London Haydn String Quartet for performances of music by Beethoven, Mozart, and Weber.

Tickets to this extraordinary bounty of world-class early music are available as individual concerts or in full or partial season packages in three seating sections, with discounts for 4- 5- or 6-concert packages. Each full 6-concert subscription comes with a voucher for one free guest ticket. All three tiers feature general seating. Note that Tier 1 seating closes on September 30. The extra clarinet concert is available as a separate single ticket.

Tickets may be ordered online at EarlyMusicNow.org. Tickets may also be ordered by phone at 414.225.3113, or by mail at Early Music Now, 759 North Milwaukee Street #420, Milwaukee 53202. A printable order form is available on the website. All orders will be delivered via email as “print-at-home” tickets, with the option of choosing email or mail receipts to be redeemed at Will Call.