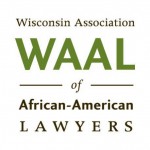 The Wisconsin Association of African-American Lawyers and the NAACP Milwaukee Branch partner to host a panel discussion for members of the general public and attorney’s on navigating children’s court.