Business district will do formal study with goal of a trial as early as this summer. 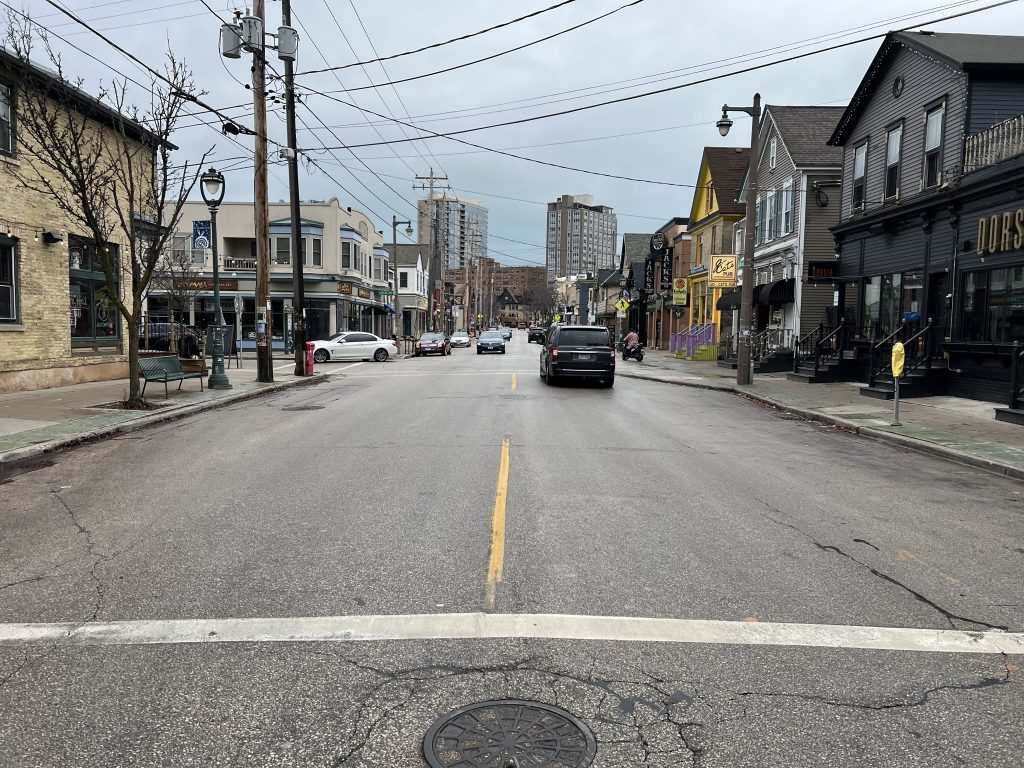 There is a lot of analysis to be done and options to be studied, but, if the stars align, a portion of Brady Street could be closed to motor vehicle traffic and repurposed as a pedestrian zone starting this summer. The closure would be a trial, part of a multi-year effort to increase the vibrancy and diversity of the Lower East Side commercial corridor.

The Brady Street Business Improvement District (BID) has hired engineering firm GRAEF and architecture and design firm The Kubala Washatko Architects to formally study pedestrianizing a portion of the Lower East Side commercial corridor between N. Warren Ave and N. Franklin Pl. The two-block stretch, just a block from N. Farwell Ave. and N. Humboldt Ave., has the highest density and greatest number of businesses.

“It’s a pretty complicated problem to solve, which is why we hired the professionals,” said BID director Rachel Taylor in an interview. The BID board, with city support, voted to authorize the study in September following a fatal hit-and-run crash. Taylor said the timing was right given all of the changes wrought by the pandemic.

She said restricting the scope to the two-block stretch limits the number of conflicts with driveways and creates an area that BID could help program and maintain. “If we are going to be taking a look at anything, I want to make sure it has the best chance of working out,” she said.

“I’m hoping for a couple of ideas that we can kind of pick and choose what’s effective. I am the staff for the BID. That’s it. So we need some solutions that are not hyper-dependent on multiple staff members,” said Taylor.

The street is one of the city’s oldest commercial corridors, but its vibrancy has ebbed and flowed throughout the city’s history alongside immigration waves, deindustrialization and suburbanization.

“How do we make sure we are still a destination in Milwaukee instead of a thoroughfare as we have been?” she said, referencing the draw of Fiserv Forum and Deer District and the need for historic commercial streets to compete. “The goal is not to have Bourbon Street.” That includes not having a permanent open alcohol container zone.

Get a daily rundown of the top stories on Urban Milwaukee
Taylor said the pedestrian zone could be a catalyst to create a healthier, “dynamic and strong” neighborhood that is welcoming to all. She said the pedestrianized area could help retailers and other non-nightlife businesses, including potential future startup office tenants, by increasing the number of daytime visitors and boosting the number of options. It could also be used for community events, whether that’s musical performances or a community skating rink. Long-term, Taylor hopes it could improve health outcomes, including reducing asthma rates, and potentially cut area auto insurance rates by reducing the number of crashes. “It would be ideal if we could have some of those strong knock-on benefits,” said Taylor.

She said several community meetings would be held to discuss the resulting proposals. Additionally, the Common Council and Mayor Cavalier Johnson would need to sign off on any proposals. “If we are going to make a major change like pedestrianization we have to be cognizant of the historical importance that it’s going to have and the impact on people. They are trained you can shoot down Brady Street to get from point A to point B. How do you change that mindset that you can’t shoot down Brady Street; you have to interact with it?”

Taylor expects the BID will receive plenty of feedback on whatever is proposed. She said the BID will support any decisions with data. Some of that will come from UW-Milwaukee professor Robert Schneider and his students, who will also study pedestrianization and its success in other cities.

“The only thing we always ask is people remember there is no need for threats, obscenities, anything of that nature. It’s unnecessary,” said Taylor. “No one is going to be making any permanent moves at any point without multiple discussions.” She said she has recused herself from voting on the matter with the BID board. “This is for the residents. This is for the people of Brady Street. What’s the point of doing all this work without getting their input?”

Area Alderman Jonathan Brostoff is supporting the study and making improvements to the street.

“The Brady Street neighborhood is incredible. It’s also got some serious challenges when it comes to bike and pedestrian safety,” said Brostoff. “Given the recent and horrific tragedies we need to start looking for creative solutions. I’m excited to work with the community and make Brady Street even more vibrant, walkable, family-friendly and welcoming.”

The BID and city could move quickly said the BID director, with a study completed this spring and an implementation tested on a temporary basis this summer.

“That is a massively tall order that I am very aware is probably not feasible,” said Taylor. She said part of the analysis would include evaluating neighbor and business feedback, the closure’s value to the adjacent Tamarack Waldorf School and any other unforeseen impacts. “All of these things need to be taken into context and reviewed before any permanent decisions need to be made.”

The plan will include options for keeping the Milwaukee County Transit System‘s GreenLine bus route on the street. The route, which runs from the airport to Bayshore shopping center, is one of the most heavily traveled in the system. “If we are going to be taking away some options when it comes to cars, we still are going to need a way for people to come down here and I’m a big, big supporter of mass transit,” said Taylor.

The Brady Street BID is funded by a special property tax assessed on commercial properties within its boundaries. Taylor said the group is working with Brostoff and other city officials on options to fund the pedestrian zone.

This isn’t the first time a high-profile incident triggered changes to the street. Mary Glorioso died after being hit by a car while crossing the street in 2004. As a result a number of curb bump-outs — sidewalk extensions intended to increase pedestrian visibility and decrease crossing distances — were installed.

Milwaukee previously had a six-block pedestrian street on Mitchell Street. It was removed in 1995, two decades after it was installed. Many cities across the country installed pedestrian malls during that same period in an attempt to allow historic retail streets to compete with suburban shopping centers, but many of the efforts failed. Taylor said her hope is that the consulting team is able to pull best practices from elsewhere to develop options that would work for Brady Street.

With or without a pedestrian zone, more change could be coming to Brady Street. An 11-story hotel is proposed to replace a mostly-vacant building one block east of the proposed pedestrian zone.