But two big questions remain: will city win convention and will it benefit financially? 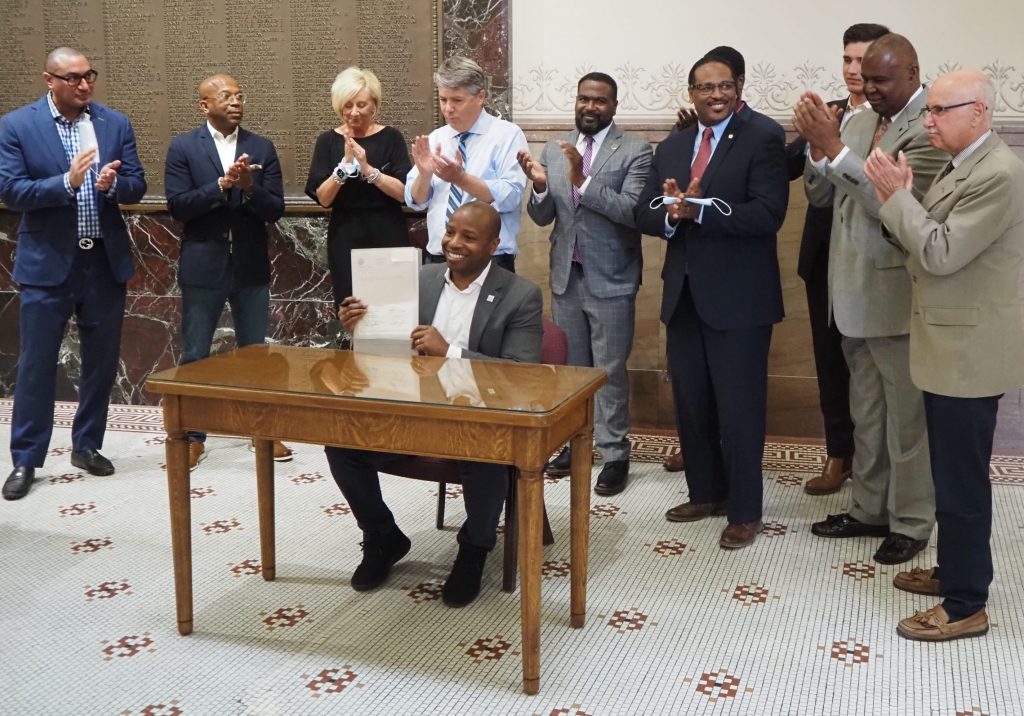 “And I’m just as excited about the Republican National Convention coming to Milwaukee in 2024,” said Johnson at a press conference in the City Hall rotunda.

Johnson was also there on March 11, 2019 when the council voted to accept the DNC 2020 agreement and then-Mayor Tom Barrett quickly signed the agreement. The Democratic National Committee awarded the city the convention earlier that day.

But Republicans wanted the contract approved first before making a final decision between Milwaukee and Nashville, creating the potential for local officials to seek political leverage. After appearing poised to add what was regarded as a poison pill to the deal last week, the Common Council unanimously adopted a revised framework Wednesday morning.

“My support of this agreement, which has been long standing, is primarily driven by the benefits that hard-working Milwaukeeans will receive when the Republican National Convention comes right here to the city,” said Johnson.

The agreement spells out the city’s responsibilities in hosting the convention, including road closures, staging areas, permitting and managing security.  Johnson and the convention host committee lobbied council members over the past week to support the agreement.

Get a daily rundown of the top stories on Urban Milwaukee
The event is universally agreed to be a win for service and hospitality workers who will see a surge in business, but council members had raised concerns about the risks and benefits to the cash-strapped city government. An amendment was introduced last week that would have required a $6 million direct payment by the RNC to the city, which is otherwise unable to levy a sales or hotel tax. But Wednesday morning the council adopted an agreement that only calls for a “good faith effort” for the host committee to provide a financial benefit for the city.

The council members who were heavily involved in changing their colleagues minds, Michael Murphy and Ashanti Hamilton, suggested that saying yes to the RNC allows for a better conversation with the Republican-controlled State Legislature about the city’s financial future.

“We are facing some very difficult times in the future and our structural deficit can’t be solved without the collaboration of the State of Wisconsin,” said Murphy. The state has cut shared revenue by more than $100 million annually over the past two decades, effectively capped the property tax levy and blocked any new taxes. Milwaukee faces the need to begin laying off approximately 25% of its workers in 2024 without new revenue options because of a pension funding requirement.

Hamilton, in an interview after the press conference, said he knew some members were skeptical, but voted for the deal as part of a long-term effort to find support to address the city’s fiscal issues.

Republican Party of Wisconsin vice chair Gerard Randall said the convention will be a long-term win for the city, and that the city will see the benefits from an improved relationship with the Legislature.

“The infrastructure that we’re building here is for the long term,” he said. “And this lays a marker down to other conventions that are considering communities like Milwaukee that we can put on a great show.”

But how will the city ensure that a good faith effort is made?

The 2008 St. Paul host committee donated $7 million to local foundations and the 2012 Tampa host committee gave $2.83 million to charities. A Cleveland State University study of the 2016 Cleveland RNC found that 44,400 people visited, generating a local economic impact of $142.2 million. Surrounding Cuyahoga County saw an increase of more than $1 million in sales tax revenue from the 2016 convention week, an effect council members pointed out last week wouldn’t help Milwaukee because it does not have its own sales tax.

The host committee, formally 170 Freedom Milwaukee 2024 Host Committee, Inc., is responsible for raising more than $60 million to host the convention.

The federal government will provide a grant to cover the security costs of the convention, but council members have expressed concerns about the costs of non-security expenses like public works efforts.

“Now we’ll play a waiting game,” said Randall. A decision is expected later this month on whether Milwaukee or Nashville will host the convention.