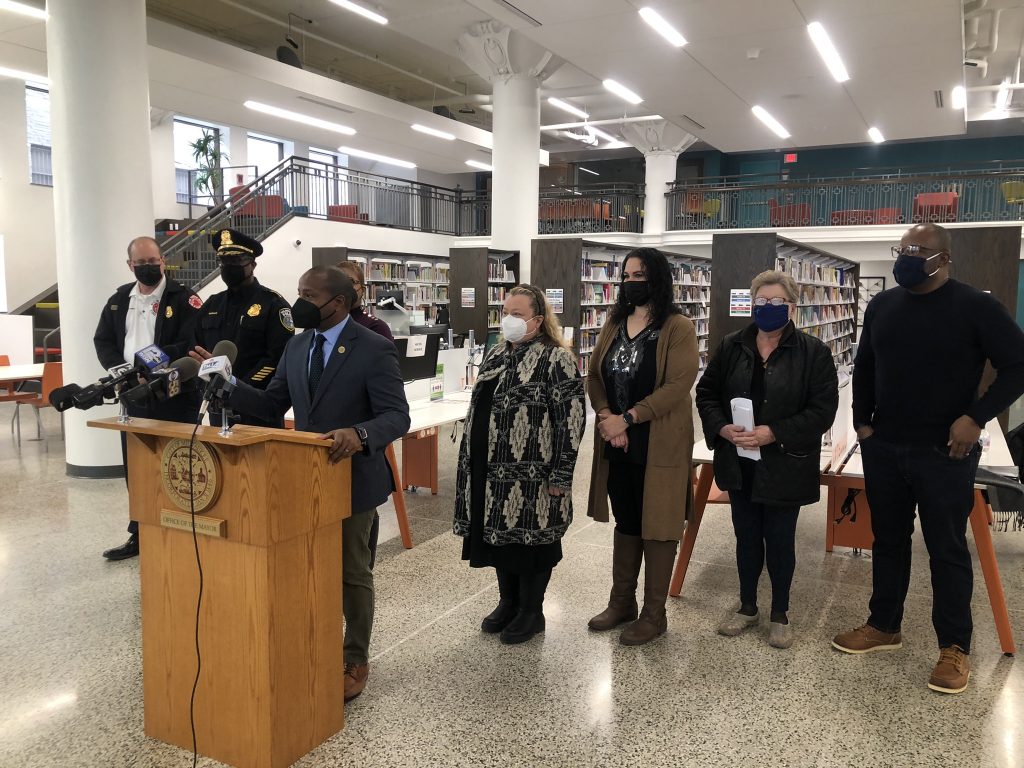 The plan calls for a focus on law enforcement, but also an emphasis on community healing and neighborhood investment.

“Let’s not pretend there are going to be simple solutions, because there are not,” Johnson said. “Milwaukee is in the midst of violence that is unacceptable and unsustainable for this city.”

“It’s time for a different path to reduce violence,” said Johnson, who is running for mayor. “A path that includes added resources and a commitment to support the approaches that we know will work.” The city set a new record for homicides in 2021, eclipsing a high set the year prior.

His plan calls for maintaining the Milwaukee Police Department‘s sworn strength level, strengthening laws around gun access, community-oriented policing, investments in the Office of Violence Prevention (OVP) and the continued implementation of the Blueprint for Peace plan. He said it complements his multi-faceted strategy to combat reckless driving.

Johnson, in January 2021, was a key figure in supporting the council’s acceptance of a federal grant that funded 30 new police officers. Last fall he also supported shifting a portion of the city’s $195 million American Rescue Plan Act (ARPA) grant to allow funding for hiring and training 195 new officers that would replace departing officers.

“Obviously policing is a very expensive endeavor,” said Johnson. He said the city would need support to maintain its police force. “I know that there are fiscal realities we have to deal with.”

He publicly backed efforts for civilianization of roles within MPD, a move designed to lower the cost of staffing certain positions, “so we can have more sworn officers out doing sworn things.” A study is underway to determine the right sworn strength level of the department.

“My priority will be to invest additional dollars into the Office of Violence Prevention,” said Johnson when asked. He praised the expansion of the OVP 414Life violence interrupter program to the South Side.

Governor Tony Evers announced an $8 million grant for the office in October, but the city only matched it with $3 million in ARPA funding. The acting mayor is calling for $5.5 million more. “It’s my intention to allocate those funds from the next tranche of ARPA funding,” said Johnson.

Johnson will also elevate the OVP director to a cabinet-level role. The position, which currently reports to the health commissioner, is held by Arnitta Holliman. Past office holder Reggie Moore, now with the Medical College of Wisconsin, joined Holliman and Johnson at the press conference.

Norman has repeatedly said improvements to public safety in Milwaukee will require more than increased policing. He was publicly supportive of Johnson’s collaborative approach.

“The acting mayor is very insightful to bring all of these partners here. This is truly how things get done,” said  Norman. “Our resources are finite. This plan has incorporated a lot of things and it aligns with a lot things the Milwaukee Police Department is working on, and most importantly, [it] talks about partnerships.”

“What’s different from prior administrations is that this is something more than I ever saw in my 26 years with this particular department in how we are being intentional in our conversations, intentional in our working together and many of us have been doing this without having to be pushed to do this,” said Norman.

How will the city measure success?

Johnson said using the same crime statistics the city often does, but it will also measure participation in youth programs.

There’s still one final ally Johnson is looking for. “My plea with the community is to be our partners.”

A full copy of the plan is available on Urban Milwaukee.

One thought on “City Hall: A New Public Safety Plan for Milwaukee”