Expanded I-94 Will Damage Pigsville

A thriving, integrated neighborhood will be hurt by expansion plan. 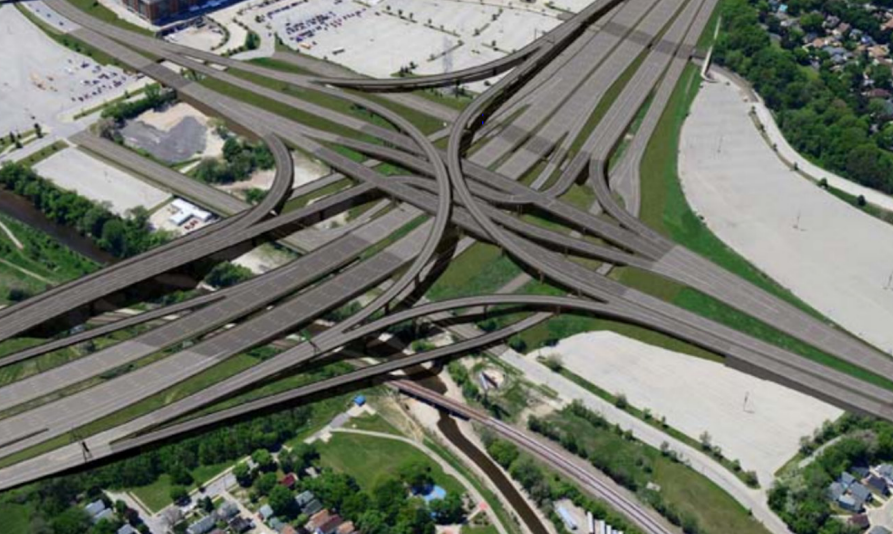 2021 Stadium Interchange proposal. Image from the Wisconsin Department of Transportation.

I live in perhaps one of the quirkiest neighborhoods in Milwaukee. Piggsville, depending on who you ask, may be spelled with two g’s and named after George Pigg, or it may be spelled with one g and named after an old pig farm. Go to our neighborhood bar, the Valley Inn, and see pictures of people canoeing down the street on the days it used to flood due to being beside the Menomonee River. In fact, the flooding made the neighborhood almost too much trouble for the city. The neighborhood had to organize to build protection from flooding and to save itself from demolition and we now have a beautiful little park by the river: Valley Park.

Our southern border is I-94. West of us is the Menomonee River. North of us is the Molson Coors plant. This means our streets are almost all dead ends. It’s a quiet little corner that many in the city don’t know about. I meet residents all the time who say they chose to live here to shelter their family from the struggles many Milwaukeeans face due to deindustrialization, redlining, white flight and other systemic barriers. Also, near and dear to my heart is that it’s one of the most diverse neighborhoods in Milwaukee, a city infamous for its segregation. In the 2010 census, our neighborhood demographics were 36% Black, 34% white, 16% Latino, and 11% Asian. At its best, our neighborhood is a peaceful, joyful place where kids and families across racial identities and the socioeconomic spectrum share our park for a game of kickball and grab pizza from the Valley Inn.

I also teach high school US History. Unsurprisingly, the theme of racial discrimination is prevalent in my subject. One of the most infamous examples of systemic racism is the interstate highway system. I-94 and I-43 notoriously demolished anchor Black businesses in Milwaukee. Even in the past, we knew highways destroyed the fabric of neighborhoods. Highway 175, just west of my neighborhood, stops abruptly after only a couple exits, having been stopped by the then-middle class and white residents of the area.

Thanks in part to this destruction of north side anchor businesses, segments of the north side are scarred by abandoned lots and a lack of local businesses or necessary amenities like grocery stores. Many northside residents have no choice but to buy a car that may be out of their price range just to buy food. My own neighborhood is a food desert. Besides our wonderful tavern, our only food source in walking distance is a Hometown Gas Station. 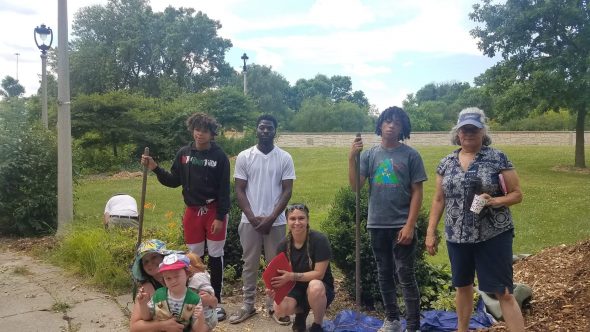 Neighborhood families taking a group photo after an afternoon of volunteering through Friends of Valley Park. Photo courtesy of Leland Pan.

In this context, expansion of I-94 is both an insult to lessons learned from the past and a direct attack on my neighborhood. A proposed new on-ramp from I-94 to the truncated Highway 175 could affect the lighting and setting of our Valley Park, reducing the number of families who view it as a safe place for their kids to play. The additional fumes and sound pollution from moving the highway closer to our neighborhood could exacerbate the health disparities working class, non-white communities face in Wisconsin. Most insultingly, our neighborhood gas station has expressed interest in expansion to provide real food options to the neighborhood. Instead, it may face shuttered doors as the expansion would demolish it, an urgent care center, and a Black owned bar on N. 35th St.

What would actually help my neighborhood and northside residents generally would be improved public transportation infrastructure and investing in necessities like grocery stores. Worsening conditions for our residents so wealthy suburbanites can shave off 30 seconds from their commute is continuing the decades of policy insults Milwaukee has had to endure, despite it being the economic engine and cultural hub of the state. I hope the whole state can learn from the past and support neighborhoods like mine by stopping the I-94 expansion.

5 thoughts on “Op Ed: Expanded I-94 Will Damage Pigsville”