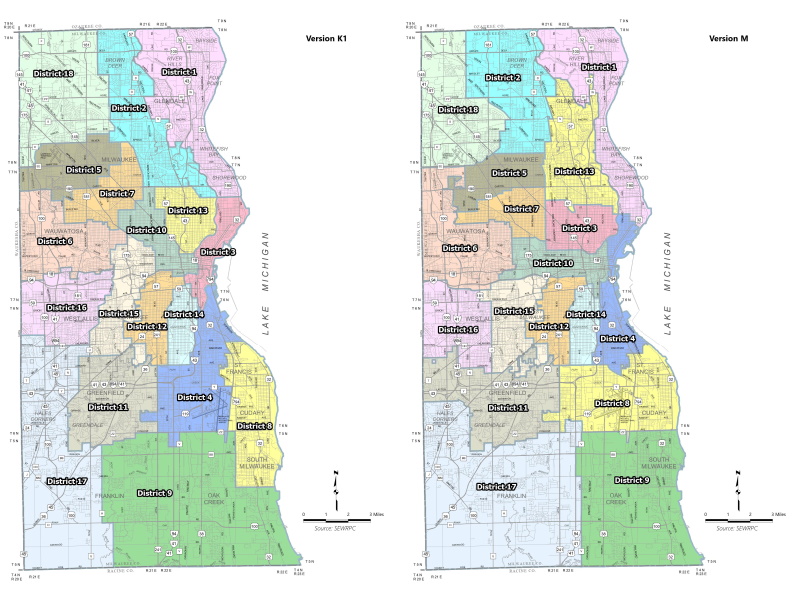 The Milwaukee County Board has taken a concrete step toward approving a new map for its 18 supervisory districts.

Recently, the board voted down the third and final map submitted to them by their Independent Redistricting Committee (IRC). This ended the independent process, leaving redistricting to the supervisors.

On Wednesday, members of the county board’s Committee on Judiciary and General Services reviewed three maps that were drawn by the Southeastern Wisconsin Regional Planning Commission (SEWRPC) and recommended two of them for consideration by the full board later this week. SEWRPC also assisted the IRC with drawing their maps.

Members of the committee emphasized that the board needs to approve a map, and soon. It’s already more than a month behind schedule and the deadline to certify maps in time for the Spring 2022 elections is less than a month away.

Once a map is approved, the board will send maps to the municipalities, like the City of Milwaukee, to draw their election wards. “They’re in dire straits to get their community wards done,” Sup. Patti Logsdon said.

Milwaukee County Corporation Council Margaret Daun has warned supervisors in legal opinions issued during the IRC process that failure to adopt new maps, forcing candidates to run on the maps created in 2011, would create an “acute risk for litigation,” for violations of the Voting Rights Act of 1965 (VRA), denial of due process and First Amendment claims which could result in “a mandamus action to force the drawing of maps, or a request that a court intervene to draw the maps itself.”

The IRC, commissioned by the board and composed of six retired judges, worked for nearly three months on the new maps. They set their own redistricting principles, chief of which was respect for the Voting Rights Act of 1965. But the IRC’s independence was quickly overthrown by the county board, when pressure from from a handful of supervisors led the IRC to consider political incumbency as a factor in drawing new map

Get a daily rundown of the top stories on Urban Milwaukee
The three maps reviewed by the committee improved upon the final IRC iterations voted down by the board. A major concern that was addressed in all three maps was the strength of Black-voter majorities in majority Black districts.

Throughout the process, supervisors, other elected officials and members of the public shared concerns about the relative strength, or weakness, of voting age majorities in the six districts drawn to be majority Black districts.

The final map from the IRC had only two Black majority districts where the voting age population was more than 60% Black. For this reason, most of the supervisors that voted against the map made suggestions to SEWRPC for increasing these majorities in the majority Black districts.

The three maps, titled Map K1, Map K2 and Map M, all did better on this front. Sup. Tony Staskunas, chair of the committee said, “For me, all three look very good for the voting rights act.” A statement echoed by other supervisors during the meeting. Ultimately, the committee voted to recommend maps K1 and M.

Map M was the map favored by supervisors that noted a preference at the meeting. Supervisors Staskunas, Logsdon, and Shawn Rolland all stated that Map M was their preferred map. Sup. Jason Haas said he could “conceive of” voting for it.

Sup. John Weishan, Jr. questioned why some supervisors thought K1 was better than K2 when considering the voting age populations in the districts. In response Sup. Staskunas directed Kevin Muhs, executive director of SEWRPC, to break down the differences between the maps.

These differences hinged on an attempt to create a map with nine districts that were majority-minority, something the IRC attempted with their maps, as well. This is difficult to achieve since the county’s voting age population is 54% white. So, the new maps create what’s called an “influence district,” wherein there is a slim white majority and a plurality of minority voters that make up a significant portion of the population.

Along with concerns about Black majority districts, there were also concerns about both the southern and northern suburbs and the ways the districts were drawn. One concern raised by supervisors and elected officials was that southern municipalities were being split into too many districts. This was largely addressed by SEWRPC under the three latest maps.