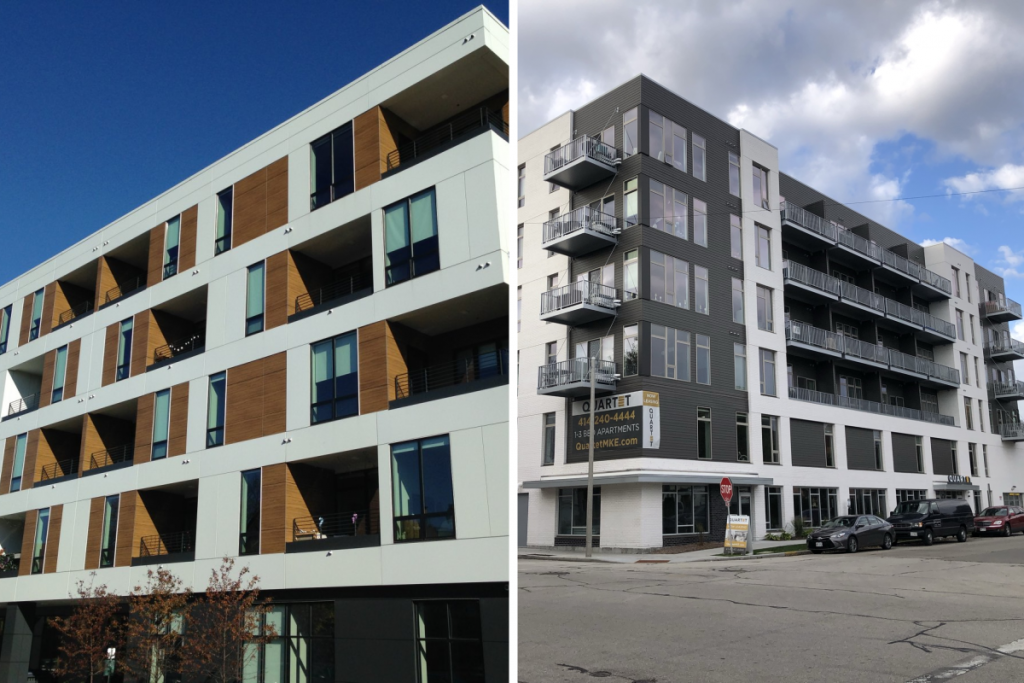 The Easton and Quartet. Photos by Mariiana Tzotcheva and Jeramey Jannene.

An affiliate of the company acquired The Easton for $27.4 million. The five-story, 96-unit building was developed by Klein Development, with Jeno Cataldo as a publicly-disclosed lead investor in the project. Located on the Lower East Side, it was completed in 2019. It is assessed for $16.96 million.

The Easton and Quartet are both managed by Harmoniq Residential, the property management firm launched by broker Colliers International.

Not much information about Hilbert, which is based in Newport Beach, CA, was immediately available. The company did not respond to a request for comment by the time of publication.

Both Milwaukee-based developers have other projects, built before and after the two now-sold buildings, that they maintain ownership of.

New Land, spurred on by the success of Quartet, is developing the Element apartment building three blocks to the west. We profiled that project last week in our weekly Friday Photos column.

The announcement comes less than a week after the group announced that the 53,400-square-foot building it purchased in 2018 at the business park, Century City 1, is full.

Good Opportunity Fund, led by Good City co-owner Dan Katt, submitted an unsolicited purchase offer to the Redevelopment Authority of the City of Milwaukee to purchase the site at 3055 W. Hopkins St. The authority’s board will consider granting an exclusive right to negotiate at its meeting on Oct. 21.

The final form of a six-story apartment building is now clearly visible in Walker’s Point.

New Land Enterprises is developing Element, a 66-unit, market-rate apartment building at the northeast corner of S. 5th St. and W. Mineral St. It is scheduled to be completed by summer 2022.

Engineering firm HNTB announced it was relocating its regional office and 90 employees to downtown Milwaukee in Feb. 2019.

Now it’s adding even more space as it grows its Milwaukee workforce. The company reports having 110 employees working from the new office with 30 open positions.

Surrounded by friends, family, project backers and a large network of project contractors Wednesday afternoon, Rafael Garcia ceremonially cut the ribbon on the redeveloped 37th Street School. It now houses 49 apartments for seniors, with 43 units set aside at below-market rates for qualifying individuals.

“I truly am humbled by the amount of work and support by people who weren’t even paid on this project,” said Garcia. The celebration was a long-time coming.

People living temporarily on public property would be subject to criminal charges, including fines and jail time, under a new Republican bill in the state Assembly. It’s raised fierce opposition from critics who say it will harm people experiencing homelessness, while the measure’s author says it’s meant to help them.

The bill received a public hearing Tuesday, less than a week after it was introduced as part of a package of legislation that Assembly Republicans say is aimed toward addressing the state’s workforce housing shortage. Those bills include provisions around zoning and approval of new workforce housing projects for certain local governments.

On Tuesday, the Assembly Committee on Housing and Real Estate heard from lobbying groups and local government officials on the myriad proposals in the package.

One of the bills, AB604, would make temporary living on public property a Class C misdemeanor. For people without homes, that could mean 30 days in jail or up to a $500 fine.

Construction Starts on Biggest Port Project In More Than 60 Years

Construction is underway on a $35 million agricultural maritime export facility on Jones Island. It certainly doesn’t have a sexy name, but, according to all involved, it is a big deal for the Port of Milwaukee and Wisconsin.

For one, it is the largest investment in the 467-acre port since the Saint Lawrence Seaway opened in the 1950s. It’s also a first of its kind facility for the Great Lakes.

The facility, which will be operated by the Clinton-based DeLong Company, will be primarily used to export to Europe, the Middle East and Africa a nutrient-rich byproduct of converting corn to ethanol. The new complex will play a critical transloading role in connecting Wisconsin’s nine ethanol plants as well as those in southern Minnesota, northern Iowa, South Dakota and North Dakota with foreign markets where animal feed is in short supply. It will also enable exports of other farm products.

The couple were longtime community advocates that created a lasting impact on the Harambee community and have been known as the Black Mayor and First Lady to many. Mildred passed away in 2019.

“Reuben and Mildred spent the majority of their lives serving our community on many levels – in our schools, neighborhoods, philanthropy and through countless civic endeavors,” said Bader president and CEO of Dan Bader. “This building and its tenants were born in response to what we heard directly from our neighbors. It’s only fitting we name a community building to honor their determination, perseverance, and courage to make the lives of others better. It is a testament to their legacy that continues to inspire so many people today.”

A two-story office complex is available at a busy Milwaukee intersection.

The two-story, 33,995-square office building was constructed in 1983, though a portion of it is many decades older. The Neoclassical stone facade and a portion of the interior of what was last a First Wisconsin bank branch, is integrated into the complex. It was originally built in 1911 to the designs of Kirchhoff & Rose.

An affiliate of Good City Brewing bought the Century City 1 warehouse in 2018 for $867,858. The 53,400-square-foot building, which opened in 2016, was vacant at the time and sold at a discount by a partnership of General Capital Group and the City of Milwaukee.

It now has five tenants.

Good City Brewing, which has storage and office space in the building, is joined by Craft Beverage Warehouse, Planet to Plate‘s Hundred Acre urban farm, Klein-Dickert Glass and B83 Testing and Engineering.

Mansion’s Garage Will Be Constructed Using Secret Cache of Sandstone

It wasn’t a pot of gold, but Andy Nunemaker did find something interesting buried in the yard at his new house, 3230 E. Kenwood Blvd.

Nunemaker, a healthcare entrepreneur, bought the 25,553-square-foot UW-Milwaukee Alumni House in January for $1.8 million. Completed in 1923 to the specifications of architect Fitzhugh Scott, the university had owned the house since 1949.

As part of restoring the 14-bedroom English Tudor-style building to a private residence, Nunemaker is going to add a three-car garage to the property. But what material should be used to build the garage to match the historically protected house?

By chance, there is some Plymouth sandstone — the same rock the house is made out of — that is available and very close by.

As part of Milwaukee Mayor Tom Barrett’s Strong Neighborhoods Plan, the City’s STRONG Homes Loan Program has hit a new milestone with more than 500 partially-forgivable loans provided to local homeowners for essential home repairs. The initiative is administered through the City of Milwaukee’s Neighborhood Improvement Development Corporation (NIDC) to increase housing stability and affordability and fight back against blight and foreclosure.

“Affordable and accessible housing is the foundation of a stronger, more equitable Milwaukee,” said Mayor Barrett. “I am proud our STRONG Homes Loan Program is delivering real results for residents and families in supporting homeownership and strengthening neighborhoods throughout the City.”

The STRONG Homes Loan Program offers partially forgivable loans up to $20,000 for homeowners throughout the City of Milwaukee. Loans can be used to make emergency and essential home repairs and address building code orders. Loans are partially repayable, with a deferred payment option available for homeowners who are low income and elderly or disabled.