The announcement comes less than a week after the group announced that the 53,400-square-foot building it purchased in 2018 at the business park, Century City 1, is full.

Good Opportunity Fund, led by Good City co-owner Dan Katt, submitted an unsolicited purchase offer to the Redevelopment Authority of the City of Milwaukee to purchase the site at 3055 W. Hopkins St. The authority’s board will consider granting an exclusive right to negotiate at its meeting on Oct. 21.

A conceptual development plan shows a nearly identical building being developed on the parcel that is located immediately south of the first building.

Good City Brewing, which has storage and office space in the first building, is joined by Craft Beverage Warehouse, Planet to Plate‘s Hundred Acre urban farm, Klein-Dickert Glass and B83 Testing and Engineering. The one-story building anchors the northern edge of the business park at W. Capitol Drive.

The 4.7-acre parcel the investment group hopes to acquire is currently a vacant lot. If approved, Katt’s group would have an exclusive one-year period to negotiate for the purchase of the property.

Once home to Tower Automotive and more than 5,000 jobs, the city completed site preparation work on the 84-acre business park in 2014. But the city has struggled to attract permanent employers to the area. Talgo‘s lease of a former Tower plant, until the lease-up news, was the leading success story.

The developer-turned-brewer hinted that new development may be coming in his announcement Tuesday that the first building was full.

Get a daily rundown of the top stories on Urban Milwaukee
“We are continuing to have conversations with companies interested in relocating or adding operations at Century City,” said Katt. “We are actively exploring financing opportunities for future development, and really think it is only a matter of time before the next shovel is in the ground.”

“Once the pandemic started to subside in early 2021, the interest level for the space sky-rocketed and the building filled very quickly. There is much more demand for modern industrial space in this part of the city than there is supply,” said Katt. The investment group marketed the building itself.

On Friday, via text message, he said it was “just the next step in the process to build momentum and grow development at Century City.”

Good Opportunity Fund I, LLC bought the original warehouse, the first new building to be developed in the business park, for $867,858. The building, which opened in 2016, was vacant at the time and sold at a discount by a partnership of General Capital Group and the City of Milwaukee.

The announcement that the Good City affiliate had filled the building drew strong support from the area alderman and mayor.

“It is exciting to see investment taking place at Century City, and in other parts of the surrounding neighborhood,” said area alderman Khalif Rainey in a statement. “As investment grows, we are confident job growth and opportunity will follow.”

“The neighborhood is well connected to workforce and transportation, and forward-thinking companies are finding opportunities at Century City,” said Mayor Tom Barrett.

The two have previously been at odds with how to proceed. A plan to locate a new meat processing plant for Strauss Brands in the business park ultimately drew opposition from Rainey, who previously supported the proposal.

Katt launched his real estate firm, Craft Development, in 2013 after working in business and project development for Eppstein Uhen Architects and J.H. Findorff & Son. He holds a master’s degree in business administration from UW-Milwaukee and a civil engineering degree from the University of Iowa. He served as a backup quarterback on the latter’s football team.

The resolution does not provide a proposed purchase price or building size. 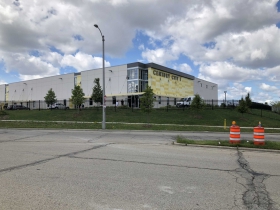