Up to 165,000 new trucks for the United States Postal Service will be made by a Wisconsin company. But they won’t be made in Wisconsin.

Oshkosh Corporation will hire more than 1,000 people in South Carolina to build at least 50,000 “Next Generation Delivery Vehicles.” The company is repurposing a 900,000-square-foot warehouse in Spartanburg, SC as part of a $155 million investment. Production is to begin in 2023.

The move is a blow to Milwaukee’s efforts to spur development in its Century City business park. And it’s the second time the city has pitched one of the USPS bidders to build the vehicle in Century City.

“Once the home of A.O. Smith Corp./Tower Automotive, Inc., this is a site ready-made for a use of this type,” said area Alderman Khalif Rainey in a press release touting the site in February. Except it’s not so ready. Oshkosh Corp. wanted an existing building. Most of the 84-acre Milwaukee business park, located near W. Capitol Dr. and N. 31st St., is vacant land.

“Unfortunately, we could not identify an existing building (in Wisconsin) that was viable for this project,” said Oshkosh Corp. executive vice president and Oshkosh Defense president John Bryant in an interview with BizTimes, the first Milwaukee outlet to report on the South Carolina selection. “However, we are pleased to share that we have chosen to establish the NGDV Technical Center right here in Oshkosh, Wisconsin. The center will be staffed by over 100 team members who will provide engineering and program support for the NGDV contract.”

“Due to the strict timing requirements for the program, building a new facility was not feasible,” said Bryant. He said site selection was driven by workforce availability, manufacturing infrastructure, proximity to Oshkosh’s supply chain and access to USPS vehicle maintenance facilities.

Wisconsin Economic Development Corporation CEO Missy Hughes said her organization is pleased that the engineering work will continue to be done in the state. WEDC has provided millions in job-creation tax credits to the company in the past decade. 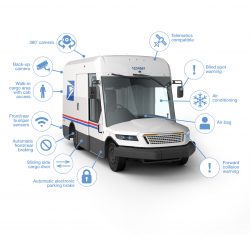 The new vehicle will replace the ubiquitous mail truck that was first made in 1987. Known as the Long Life Vehicle (LLV), it has lived up to its name. The last one was made in 2001 and the average vehicle has been on the road for over 28 years.

The replacements, which will come in both battery-electric and internal combustion engine formats, will be larger, more fuel-efficient and safer. The first vehicles are expected to be produced in the second half of 2023.

Despite the failure to land a major factory, there is still a growing amount of activity at Century City. An affiliate of Good City Brewing acquired a spec building in 2018 for less than cost to build the structure. It has now landed two tenants to join it in the 53,160-square-foot facility. In addition, Talgo leases space in a former Tower building for train car rehabilitation and assembly.

The city’s Environmental Collaboration Office is also pursuing the development of a public-private partnership that would use a Century City plant to construct modules for “highly energy-efficient homes.” Responses to a request for information were due June 28th.

The project to develop a new building for the Milwaukee Public Museum is receiving a state grant to help fund an early stage of development of the planned site.

On Thursday, the Wisconsin Economic Development Corporation (WEDC) announced it was awarding a $150,000 grant to the Redevelopment Authority of the City of Milwaukee (RACM) to support site clearance and environmental site investigation.

“A vibrant downtown is key to a community’s overall economic health, and this development will bring more visitors to downtown, which will benefit other businesses and the entire community,” said Missy Hughes, secretary and CEO of WEDC, in a statement announcing the grant.

The Common Council killed the idea. Now they’re poised to give it life.

But it ultimately held the matter pending the expected Friday release of a plan from Mayor Tom Barrett.