A Northwest Side Hub for Minority Entrepreneurs 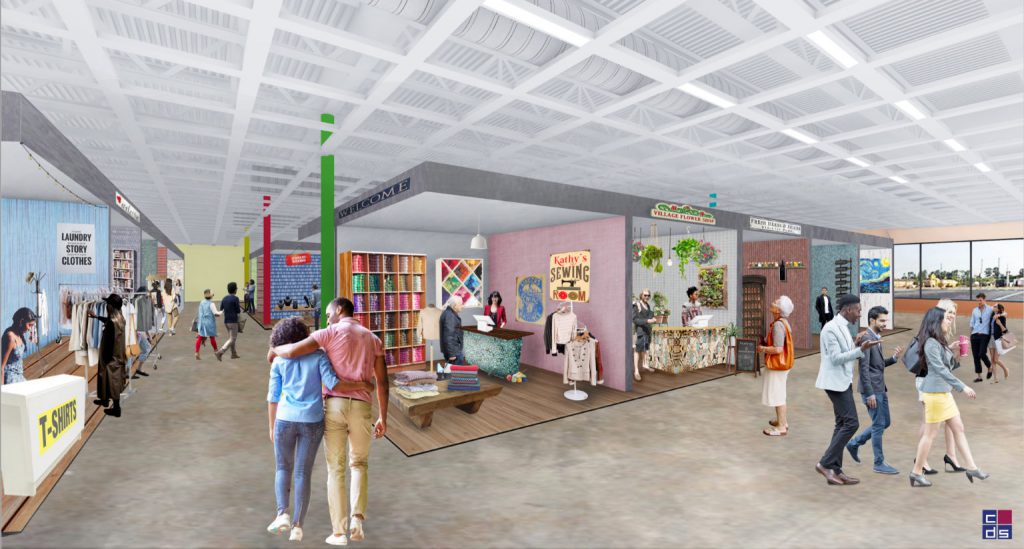 It doesn’t look like much today, but the hope is a former Joann Fabrics store across from the long-closed Northridge Mall will serve as a springboard to reinvigorate the area.

Area Alderwoman Chantia Lewis and the area BID have been pursuing the idea since 2019. It is patterned after the Sherman Phoenix on W. Fond du Lac Ave. and the Grow DeSoto Market Place in the Dallas suburbs.

Up to 45 makers, food vendors and professional services providers could occupy the approximately 22,000-square-foot space. In addition to exposure and low-cost rent, they would receive business coaching. A commercial kitchen would be available for the food vendors.

The Granville BID, a self-taxing entity made up of area property owners, hopes to open the marketplace this fall. Construction is already underway.

The $500,000 project would receive $250,000 in backing from the Wisconsin Economic Development Corporation‘s Community Development Investment Grant program. The City of Milwaukee approved a request to serve as a pass-through agent for the grant last month.

“I am incredibly excited about what this project can bring to the city’s northwest side,” said Lewis in a press release touting the grant.

A city report says that 90% of the entrepreneurs are expected to be African American, with the remaining 10% being Hmong or Hispanic.

“It will lower to barriers to entrepreneurship for people from the community,” said Department of City Development commercial corridor manager Natanael Martinez to the Zoning, Neighborhoods & Development Committee on April 7th. He said the food offerings would draw people in, increasing exposure for the other businesses.

Get a daily rundown of the top stories on Urban Milwaukee
The marketplace will be on the few tenants at the shopping center, 8603-8665 W. Brown Deer Rd.. The 12.8-acre property and its approximately 122,000 square feet of occupiable space is owned by a limited liability company, Slinger Cheese LLC, affiliated with Jay Walia. It was formerly known as Northwest Fashion Square. The current tenants in the mostly vacant complex include Buffet City, Shema International Learning Center, Extensive Taste takeout restaurant and a BP gas station.

The Northridge Mall‘s 2003 closure triggered a wave of retail closures in the surrounding area. The city, through a protracted court battle, is pursuing demolition and redevelopment of the mall.

The business improvement district, led by executive director Mary Hoehne, has helped pursue industrial tenants for some of the former big box stores. She told the committee that the plan for the marketplace grew out of a vision of putting pop up retailers in big box stores. “We think it’s going to build equity and inclusion, and really build our community,” said Hoehne. “This is 384 of our commercial property owners investing in our community.”

“There is a lot of synergy between what they plan to do with the space and plans for the neighborhood,” said Martinez of the BID and a 2017 city plan to draw new jobs in through industrial uses and retailers focused on the surrounding neighborhood. “We see this as a large anchor that could help reposition Brown Deer Road.”

“It’s going to be a great igniter on the northwest side,” said Hoehne.

Hoehne said Walia gave the BID a “sweet deal” on a 10-year lease that is effectively only the cost of electricity. The grant would cover the commercial kitchen’s development.

The executive director said she anticipated many of the food vendors would be food trucks moving to a brick-and-mortar location.

The city has used its annual request to the WEDC community grant program to support the Sherman Phoenix, The Griot, MKE Lofts, Innovations and Wellness Commons and now-canceled NEWaukee The Beacon project. The state temporarily altered the terms of the grant from a 3-to-1 match to a 1-to-1 match as a result of the COVID-19 pandemic.

A building permit filed with the city says Patera is serving as the architect of record on the marketplace’s build out and Daniel Graefe is serving as the general contractor. UWM’s Community Design Solutions created initial renderings of the concept. 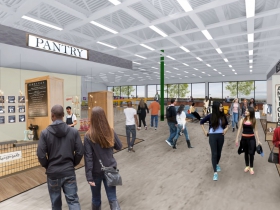 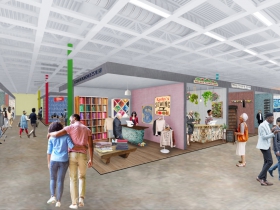 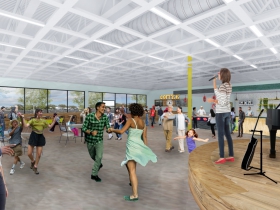 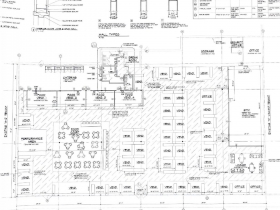 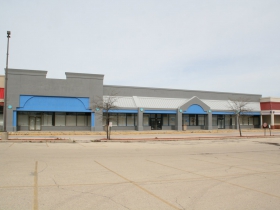 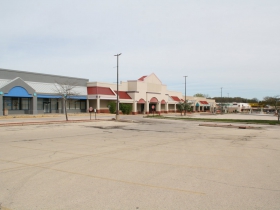 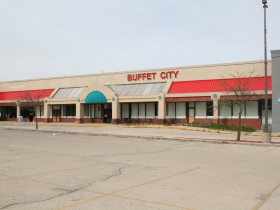 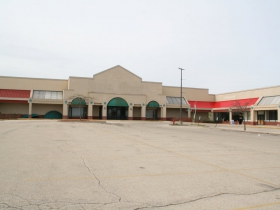 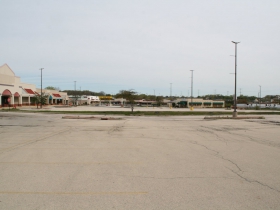 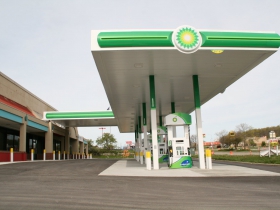 Much of our coverage of the River One (or R1VER) development has focused on the glass-clad, eight-story office building. But a second building in the $100 million development is already nearing completion.

The 95-unit Tribute Apartments will anchor the east end of the complex, running along S. 1st St. from W. Becher St. to the Kinnickinnic River.

Pre-leasing is underway on the “luxury waterfront living” complex, with the first units scheduled to be available this fall. A leasing website for the five-story building touts penthouse units, convenient access to the two commercial stalls, direct riverwalk access, private boat slips and the park space that separates it from the office building.

The Menomonee Valley will soon look a little bit more like it did when Milwaukee was founded in 1846.

The 1,200-acre marsh was filled repeatedly as the city grew and a series of canals were created as the area became the industrial heart of the city.

Now the southernmost of those canals, the Burnham Canal, will be partially filled and restored to a natural wetland. It’s part of a larger partnership to remove the Milwaukee Estuary Area of Concern designation that covers Milwaukee’s harbor and river system.

He kept pausing, trying to get the words out while one of his children called out to him, “Daddy!”

Newell was standing in the gymnasium at Phillis Wheatley School, 2442 N. 20th St. A place where, according to the real estate developer, he was suspended twice in one week as a first grader and asked not to come back at the end of the year.

“I get to tell the folks I am back anyway,” he said Thursday morning.

The plan calls for more than 130 apartments including studio, one, two and three-bedroom layouts. The three-bedroom units would have a “rooftop duplex” layout according to a press release from the Rosemont, IL-based real estate firm.

Known as The 1500s, the proposal includes a three-story office building (The 1540) and four townhomes. Delaney would live in one of the townhomes with his family and rent out the remaining homes.

The 10,500-square-foot office building, 1540 N. Jefferson St., would include two full office floors and a partial half floor with rooftop deck.

Construction Starts on The Couture

Rick Barrett is a dreamer.

So much so that as construction starts on the 44-story, 322-unit The Couture tower, he’s talking about developing an even bigger building. The 44-story apartment tower will be the tallest residential building in the state. He would like to one day build the tallest building of any kind.

Barrett held court on the project site, 909 E. Michigan St., Tuesday morning as construction equipment from J.H. Findorff & Son was unloaded around him.

Construction on the 44-story The Couture apartment tower is getting started, but the fight that emerged on a last-minute adjustment isn’t over.

When developer Barrett Lo Visionary Development needed a liability shield added to the $19.5 million city financing agreement to satisfy investors, the Department of City Development was poised to grant it in exchange for a $1.41 million personal guarantee for a portion of a federal streetcar grant that funds a line that will run through the base of the building.

The Common Council, led by Alderman Robert Bauman, decided to use its leverage to add a $100,000 contribution by Barrett Lo to an anti-displacement housing fund. Barrett Lo agreed, and DCD Commissioner Lafayette Crump even backed the amendment via email before raising concerns at a committee meeting.

City Attorney Tearman Spencer refused to sign the agreement, placing the $190 million project in jeopardy, until a compromise was reached.

Former Boston Store Is Being Transformed

Bon-Ton was relegated to the dust bin of corporate history in 2018, but the department store chain left behind a lot of real estate.

While shopping mall owners work to repurpose the windowless boxes once inhabited by department stores, downtown Milwaukee was left with something entirely different: an empty office building at 640 N. Vel R. Phillips Ave.

Chicago-based North Wells Capital acquired Bon-Ton’s headquarters in 2017, with the retailer’s flagship Boston Store department store on the first two levels. The real estate firm was working with Bon-Ton to consolidate its office and retail footprint in the building when the company filed for bankruptcy. Prior owner WisPark had already worked with the Mandel Group to convert the top of the eight-story building to apartments.

The liquidation of the retailer, which employed approximately 750 people in the building as of 2017, sped up a redevelopment plan. The building was rebranded HUB640 and gutted. See inside.

A new event venue will be constructed on the campus of the Harley-Davidson Museum.

A groundbreaking is planned this summer for a one-story building with an 8,200-square-foot event venue. It is expected to be completed in Spring 2022.

The new venue will replace Chrome, a seasonal tent structure used for formal events. It will be built at the southern end of the campus, with views of the South Menomonee Canal and Menomonee River.