Construction Starts on The Couture 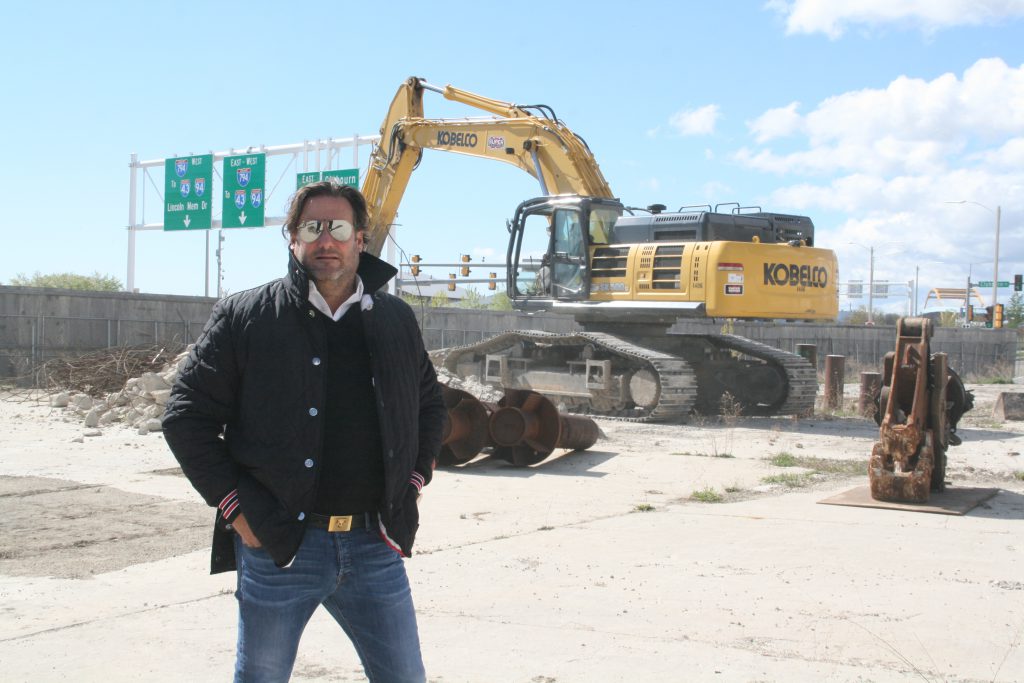 Rick Barrett is a dreamer.

So much so that as construction starts on the 44-story, 322-unit The Couture tower, he’s talking about developing an even bigger building. The 44-story apartment tower will be the tallest residential building in the state. He would like to one day build the tallest building of any kind.

Barrett held court on the project site, 909 E. Michigan St., Tuesday morning as construction equipment from J.H. Findorff & Son was unloaded around him.

“This to me feels really good,” the developer told Urban Milwaukee. “This represents what we are trying to accomplish.”

The ground Barrett and media members stood on will soon be gone. A four-month process will result in the completion of what Barrett calls “the bathtub,” the building’s foundation. Then the next four months will be spent filling in the 2.2-acre site with underground parking levels and other utility infrastructure to get back to ground level.

It will be 2022 before the first levels of the new tower appear above ground. Given that each floor plate is about 9,600 square feet, Barrett hopes that Findorff will be able to complete the structure on two floors per week.

Many didn’t think Barrett would ever get to this point. When it’s suggested Barrett could have financed the project faster if he got a $1 for every negative social media comment, he smiles, saying this would have cut years off the time it took.

“I understand there are so many haters out there that don’t think Milwaukee can get another 40-story building,” said Barrett.

The project was first proposed in 2012, a transit concourse was added to the base of the building in 2014 and a legal challenge to whether the site was on filled lakebed was resolved in 2015. In November 2018 Barrett Lo announced it had been asked to formally apply to the U.S. Department of Housing and Urban Development for a loan guarantee.

But Barrett Lo Visionary Development missed multiple deadlines to access that guarantee because of a failure to raise the required equity.

Get a daily rundown of the top stories on Urban Milwaukee
The project ultimately secured the financing, approximately $70 million. Barrett estimated that only $15 million of that came from local investors. The city is contributing $19.5 million in tax incremental financing which will pay for the public amenities in the base of the building.

“We had to finance this thing a few different times,” said Barrett, detailing how an investor with substantial exposure to the hotel industry backed out because of a pandemic-induced business downturn.

Construction costs continued to climb while Barrett pursued financing, as the price tag on the project climbed from $144 million to $190 million. But, gesturing with his hands in opposite directions, he noted interest rates kept falling. What was originally a 4.5% loan became a 3.2% loan.

Barrett and business partner Tan Lo have experienced delays before. The partners spent years pursuing financing for the 30-story The Moderne, an apartment and condominium tower at 1141 N. Old World Third St.

When it was built it was an island on the west side of Downtown. Now it’s surrounded by the Milwaukee Bucks‘ Deer District development. “Great development in my mind always pushes great investment,” said Barrett of how Fiserv Forum and other development followed.

The developer believes a similar thing will happen with The Couture. Pedestrian bridges are planned to connect the building’s public concourse with O’Donnell Park to the north, the proposed Lakefront Gateway Plaza to the east and a new building to the south.

But none of those bridges are currently funded, nor is the new lakefront park. “I am thrilled about that project,” said Barrett. “I am going to do everything I can to make that happen.” A private fundraising effort is expected to ramp up now that the building construction is advancing.

In addition to providing access to the streetcar and bus rapid transit stations in the building, the bridges will connect Downtown with the lakefront. They’ll also increase foot traffic to the approximately 45,000 square feet of retail space in The Couture.

A 2018 flyer shows plans for two restaurants on the third floor, a medical office space on the second floor and a 22,290-square-foot retail space spanning the first and second floors. The latter space would be well suited for a grocery store, Barrett thinks.

The state-owned development site to the south, listed for sale for $13.9 million, could support a 50-story tower. That’s according to conceptual designs from The Couture architect RINKA and broker Colliers International.

Barrett Lo also could build a second tower on its site. Barrett confirmed that site plans accommodate the possibility of a second tower at the site, but that future market conditions would dictate if such a project moves forward. Urban Milwaukee broke the news that a second tower was planned for the site in 2017 after reviewing site plans. A second building would require a zoning change.

Now that construction is underway, Barrett said his job shifts from raising money to filling the apartments and commercial space. “We have a lot of work to do,” he said.

Lincoln Property Company, Barrett Lo’s property management partner, will begin marketing apartments for lease in about a year said the developer. Floors four to 25 will be available first. A second elevator lobby on the 25th floor will service the upper units which will be available when the building is completed in 2023.

Approximately 30 units, all at the top of the building, have been pre-leased via $500 to $1,000 deposits. Barrett said those individuals, all Milwaukee area residents, are treating the units like condominiums they intend to reside in for a long time. The lower units will attract younger renters more likely to move frequently.

The building is expected to be completed in 2023. 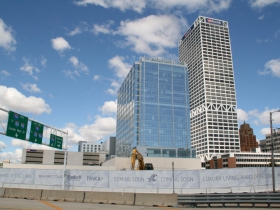 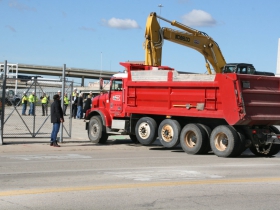 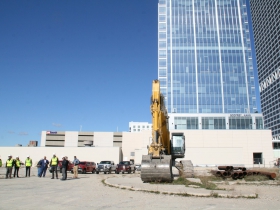 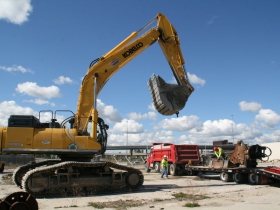 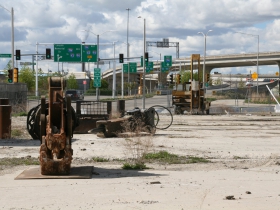 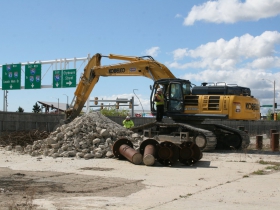