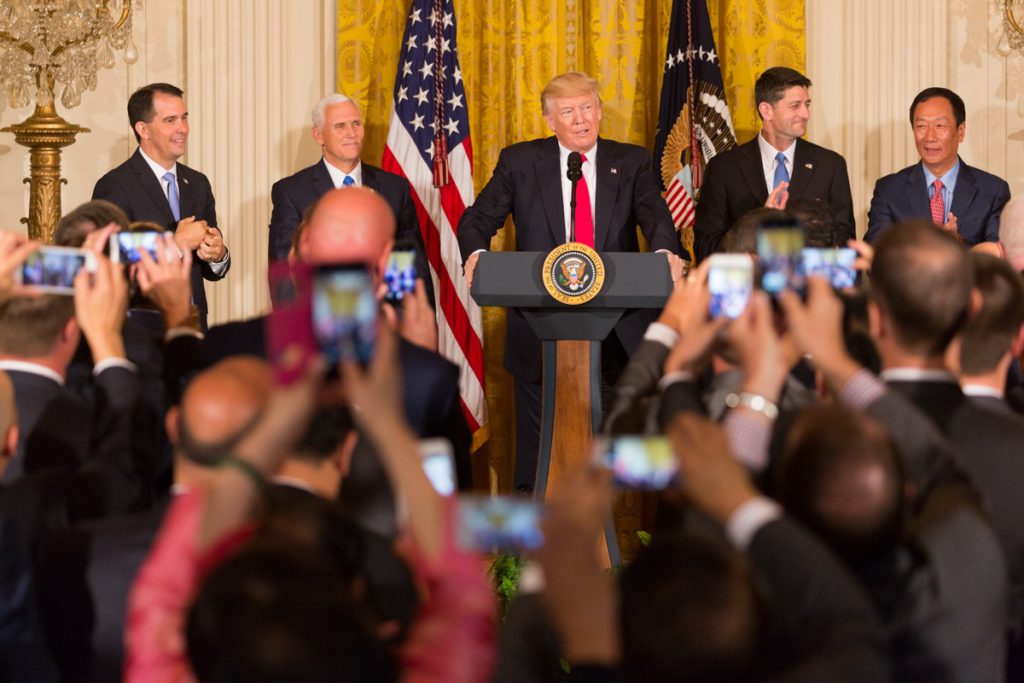 In 2017, the big players in the “Cheesehead Revolution” gathered at the Trump White House to celebrate the state landing the Foxconn deal. Photo via White House archives.

There was a certain inevitably to the news that the state of Wisconsin had finalized a renegotiated contract with Foxconn. This was a long time coming.

The deal was dead even before shovels hit the dirt. Foxconn had changed its plans before the now-infamous official groundbreaking ceremony in Mount Pleasant where President Donald Trump called it the “eighth wonder of the world.” The deal the Taiwanese manufacturing giant struck was to build one specific kind of LCD screen, and in the year between July 2017 when Wisconsin landed the deal and when work on the project officially began, Foxconn chose to build something else.

That was in June 2018. Three years and an astonishing, endless, almost comical list of failed promises later, the deal that once promised to bring tens of thousands of jobs to Racine County has been massively scaled back to recognize the realities of the cataclysmically botched project.

Gov. Tony Evers did what Democrats elected to the executive branch apparently just have to do all the time now — clean up after their Republican predecessor. The deal struck by the Evers administration, which gained bipartisan support, targets 1,454 new jobs (down from 13,000) with total jobs-contingent tax credits of $80 million, less than 3% of the original $2.85 billion from the state that was committed to the company by the prior regime.

The new deal fits the project more in line with how other projects within the Wisconsin Economic Development Corporation are structured, based on the percentage of salary compensated by tax breaks (from 17% to ~7%). It also accelerates the timeline in which Foxconn must get to work — the deal ends on Dec. 31, 2025 instead of Dec. 31, 2032. Foxconn will be on the hook for payments of millions of dollars to the local governments if it does not meet requirements outlined in the new contract. 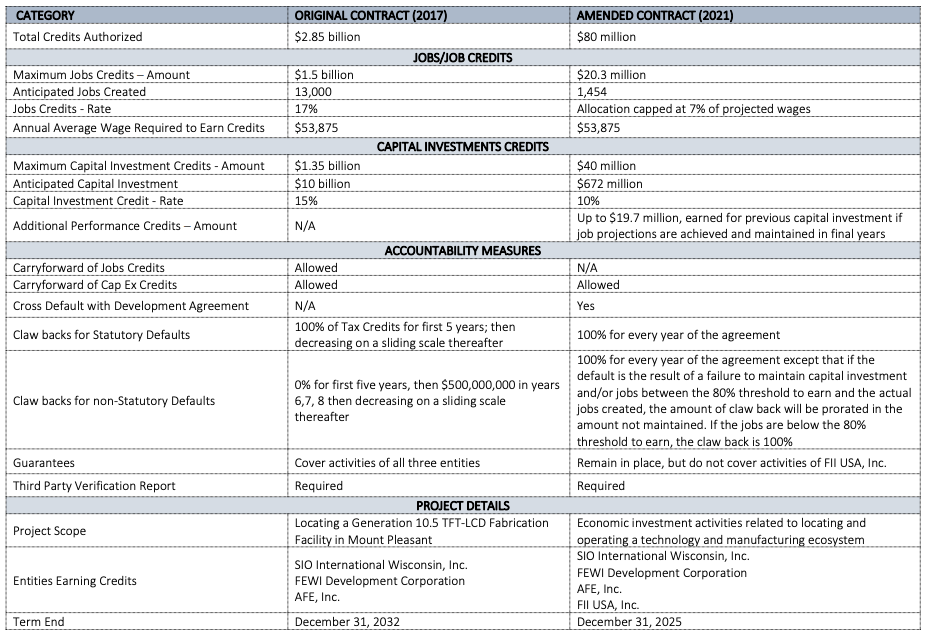 This all amounts to an important and vital — if boring and unglamourous — step forward for Wisconsin. But as the state charts course for a future with Foxconn not borne out of the land of make believe, we shouldn’t forget just how we got here.

The “Cheesehead Revolution” is what they came to call it when Wisconsin Republicans rose to national prominence in the 2010s. The decade began with Scott Walker becoming governor, the GOP reclaiming control of both chambers of the State Legislature, Ron Johnson defeating Russ Feingold, Reince Priebus taking the helm of the Republican National Committee, and Paul Ryan rising in national prominence while becoming Chairman of the House Budget Committee as a Republican Congress dug in for years of austerity and obstruction during Barack Obama’s presidency. The Tea Party/Obama Backlash election of 2010 ushered in a new era of politics, and Wisconsin was right at the center of it, no time more than when Walker’s divide-and-conquer approach upended state politics as we knew it with Act 10 and everything that followed.

A core element of this “Cheesehead Revolution,” especially as it applies to Walker’s work as governor, was in its approach to economic development, and that’s where the through-line to Foxconn connects.

Walker declared Wisconsin “Open For Business” in his inaugural address. His administration turned the Department of Commerce into the Wisconsin Economic Development Corporation (WEDC), billed as a public-private entity. That agency, often plagued by scandal, was part of the governor’s strategy of luring businesses to Wisconsin or funding their plans by using tax credits and other public dollars. Using these methods to develop what was referred to as a “pro-business climate” was central to Walker and the state’s approach to economic development for the better part of a decade.

Foxconn was the culmination of years of Walker’s economic development strategy. He, along with legislative Republicans and leaders in the business community, saw this project as the pot of gold at the end of the rainbow, the “transformational,” “game-changing” payoff for all the work they’d done to reform the state’s business climate.

Just look at how Walker describes this moment, the day the deal was announced in downtown Milwaukee in 2017.

“This is about something that someday, maybe 10 or 15 or 20 years from now, those of us in public service who are either elected or appointed, and others in the community in the private sector, will look back and say: We were part of that day. We were part of that moment.

We were part of the thing that was so transformational, it changed and put Wisconsin on the map on a global basis like nothing we’ve ever seen before. This is something that will say to the world we have arrived, the eagle* has landed, it’s spread it’s wings, and it’s taking off again. We are ready.”

Walker may have delivered the most hyperbolic quote of the whole Foxconn saga, but legislative leaders were echoing his tone.

Dale Kooyenga, then a state representative, now a state senator, compared the deal to Thomas Jefferson signing the Louisiana Purchase.

Assembly Speaker Robin Vos, whose district is now home to Foxconn’s non-factory, said, “I was elected in 2004 and I was in local government before that and I have to be honest – days like today make running for office worthwhile,” and called it a “day to remember in Wisconsin” in a press release.

When the bill was being debated in the Assembly, Vos said it represents “everything that people run for” when they run for office, and called the project an “American field of dreams.”

As he told it, during a flight to Wisconsin with Trump, Priebus looked down and showed the president some of the vacant manufacturing facilities in Kenosha, around where he grew up, and Trump said that there should be something new built there.

The key players in the Cheesehead Revolution were all aligned in this effort. Walker’s election leading to the “pro-business” changes in the state, Ryan’s rise bringing Wisconsin-style tax cut-and-austerity conservatism to D.C., Priebus guiding the national party, and Wisconsin flipping for Trump in 2016 to deliver victory for the Republicans. The legislature, governor, Congress and President were all pointed in the same direction, and the result was Foxconn.

They all came together first at the White House, then in Mount Pleasant, to celebrate their achievements in lofty, self-congratulatory platitudes.

But as we’ve all come to find out, in reality, the effort was a spectacular, abysmal, potentially career-defining failure for all of them. The reality of what came of these misguided promises is an international laughingstock. The implosion of this project should reverberate for years to come. It should serve as a permanent lesson to us all.

This was not just one project that happened to go awry. This was the culmination of an entire economic development strategy that went down in flames. This revealed an entire movement to be one built on lies. This project’s cataclysmic failure is a wholesale rebuke of the economic ideology advanced by the Cheesehead Revolution. These people were wrong, plain and simple, and what they do going forward needs to be viewed through the prism of Foxconn.

Ryan said, “We do anticipate that there’s going to be more than just this one location in the Racine-Kenosha area…This puts Wisconsin as a high skilled, high tech manufacturer on the map. It’s going to make us basically be the industrial park for Silicon Valley, which means we have a great future for the Wisconsin manufacturing industry.” He was wrong.

Touting the deal, Tim Sheehy, the president of the Metropolitan Milwaukee Association of Commerce (MMAC), said, “The ripple effects of Foxconn’s $9 billion in capital investment, and the ongoing employment from up to 13,000 jobs, generate a return of $18 in additional state GDP for every $1 in state incentives.” Sheehy even fell hook, line and sinker for a Foxconn lie on driverless car lanes, saying “We’re thinking about two years down the road; they’re thinking 20 years down the road.”

He was wrong. So many business leaders were so very wrong.

John Nygren, the now-former chair of the legislature’s powerful Joint Finance Committee, wrote in a WisPolitics op-ed in 2017 that “Foxconn did not choose Wisconsin by happenchance. Since 2010, Wisconsin has been making its way back.”

He was right that this did not come about by chance. This was the long-term strategy of the Wisconsin Republican Party. So much of what he called “making its way back” was stripping away basic and essential services in favor of buying into a fictitious ideology that made luring a company known for employee suicides, plant explosions, child labor violations, and failing to live up to promises their movement’s true north. Nygren was right that Wisconsin prioritized throwing money at grifting giants like Foxconn instead of spending resources on improving health care, education, child care, transit, and infrastructure — things that would actually help people — and now we’re worse off for it.

The Cheesehead Revolution got it wrong. It spent years building toward landing a project like Foxconn, and then Foxconn failed spectacularly. As this project turns a page, we must take a moment to acknowledge how deeply connected this failure is to the dominant political movement in our state for the past decade, how important it is to understanding the legacy of leaders like Walker, Vos, Priebus, and Ryan, and how vital it will be not to let these massive mistakes happen again.

This column was first published at The Recombobulation Area.

Dan Shafer is a journalist from Milwaukee who writes and publishes The Recombobulation Area. He previously worked at Seattle Magazine, Seattle Business Magazine, the Milwaukee Business Journal, Milwaukee Magazine, and BizTimes Milwaukee. He’s also written for The Daily Beast, WisPolitics, and Milwaukee Record. He’s on Twitter at @DanRShafer.