They demand officer Michael Mattioli be fired, his alleged accomplices be charged in death of their son Joel.

By Isiah Holmes, Wisconsin Examiner - Dec 29th, 2020 11:45 am
Get a daily rundown of the top stories on Urban Milwaukee 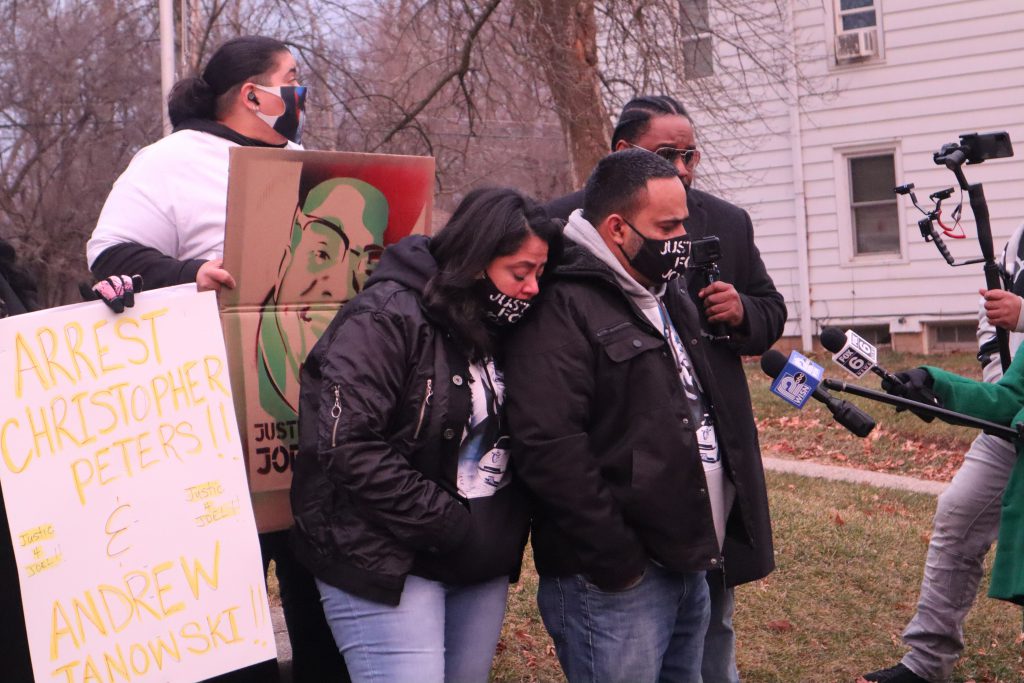 The family of Joel Acevedo stand in from of Michael Mattioli’s former home shortly before Christmas eve, 2020. Photo by Isiah Holmes/Wisconsin Examiner.

For José and Maribel Acevedo, the holiday season will come and go without their son, Joel. The 25-year-old was killed in April after being put in a chokehold by former Milwaukee police officer Michael Mattioli, at a party the off-duty cop held at his home, flouting the state’s Safer at Home order which was in effect at the time. After months of laying low, Acevedo’s family is vowing to use 2021 to raise awareness of the case and to demand that everyone involved in Acevedo’s death be held accountable.

Their renewed efforts began Dec. 22, in front of the West Allis home where Mattioli used to live. Despite Gov. Tony Evers having enacted a Safer at Home order prohibiting gatherings and non-essential travel, Mattioli decided to hold a party at his house in April. Several people attended including other police officers and Acevedo, who knew Mattioli. Mattioli claimed Acevedo stole something from his home. For that, Mattioli subjected Acevedo to a chokehold, as two others who attended the party held him down on his stomach. Acevedo’s father identified them as Christopher Peters and former parole officer Andrew Janowski.

A 911 call Mattioli made afterward was released by the family’s lawyers this week. In it, Acevedo can be heard yelling, “Let me go home!” Mattioli is also heard saying, “I’m a police officer and I need help at my house.” Ultimately Mattioli was charged with homicide and released from jail on $50,000 bond. Since then he has resigned from the Milwaukee Police Department (MPD), sold his home, and has moved to another location.

Acevedo’s parents decry the fact that two of the involved men are being treated as witnesses rather than as parties to a crime. “From day one we’ve been arguing with John Chisholm,” said José Acevedo, standing beside his wife and children outside Mattioli’s former home, now occupied by a family who had no idea that their new home was the scene of Acevedo’s death. “We’ve been going back and forth with the DA’s office. John Chisholm specifically told me, and my daughter, not to pay attention to the two so-called ‘witnesses’.’’ The father added that he was told, “they needed the two witnesses in order to charge him. It just goes to show the system that we have in Milwaukee.”

On Dec. 23 the family demonstrated in front of a Milwaukee-area probation office, which once employed Janowski. During that demonstration, with the help of protesters from The People’s Revolution (TPR), the family re-enacted how Acevedo was choked on the ground.

“What’s in the darkness is going to come out to the light,” said José Acevedo, “and it’s starting to.” The family is demanding that Janowski and Peters be charged with crimes rather than treated as witnesses. “We need to get these people charged,” said José Acevedo. “They played a big role in killing my son,” he continued, referencing the 911 call. “We know if he were fighting, that he would have been talking a lot differently. This is the narrative that they keep painting.”

Acevedo’s family further wonders why Mattioli wasn’t fired from the MPD after being charged with homicide. Or why there was no further disciplinary action taken by the Fire and Police Commission, or then-Chief Alfonso Morales. “All funded by taxpayers dollars,” pointed out activist Tory Lowe, “all funded by our money…We need justice for Joel!”

During both back-to-back days of demonstrating, the family had trouble hiding their pain. Tears welled in their eyes as the mother, father, and remaining siblings and family members comforted one another. Above all else, the family wants to combat the narratives painting Acevedo as the problem. “He was a good person!” said his mother. “Did Joel sound like he was attacking? The ‘threat’ that he had was only a cry to go home. So you answer me that question. He wanted to go home, and they held him captive, they did not let him go home. That is a crime that they all committed.” She added, “there’s no justification for my son’s murder! Period!”

The next hearing for Mattioli’s homicide charges is scheduled for March 8, 2021. “It’s important for the public to see how these police officers are engaged in excessive force and brutality,” says attorney Benjamin Crump, who is representing the family. “Especially against minorities.” Crump has also said that a civil rights wrongful death lawsuit is in the works.

Correction: An earlier version of this story stated that two police officers helped hold Joel Acevedo down when he was held in a chokehold. That is incorrect.

One thought on “Acevedo Family Pledges Push For Justice”