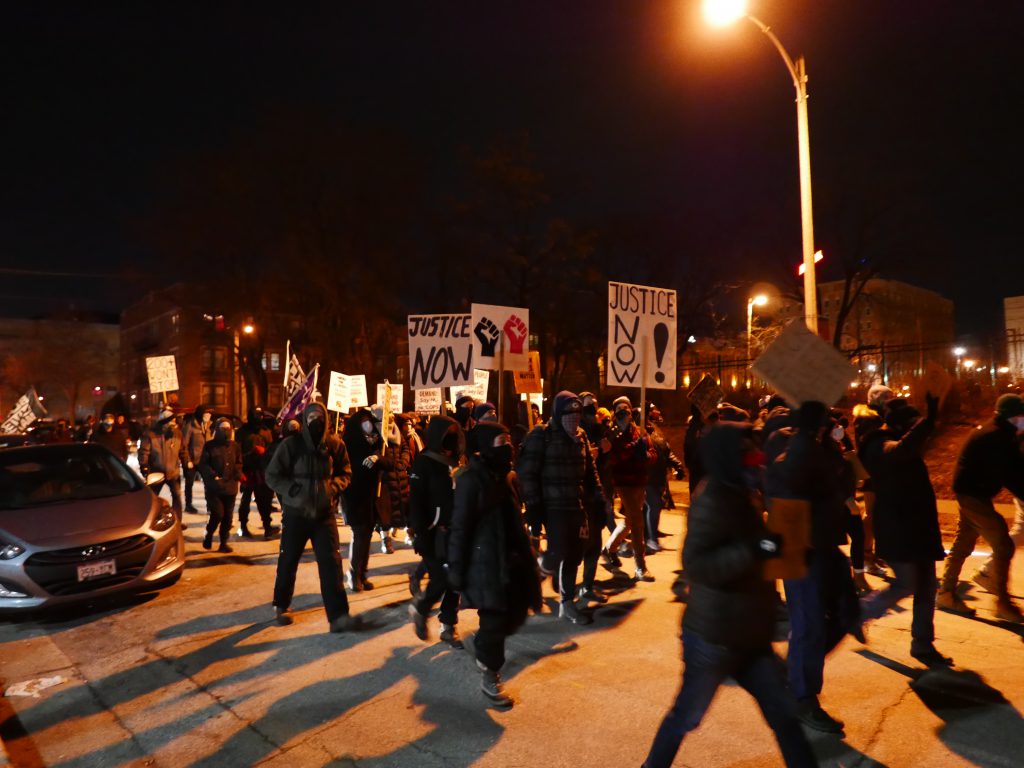 A large group gathered Monday night to march and celebrate the 200th consecutive day of action in Milwaukee aimed at protesting police killings in the Milwaukee area and around the country.

The group calling themselves The People’s Revolution met at the intersection of N. 24th Street and W. Michigan Street, outside the Rave Eagles Club.

It was a frigid night for a protest. The temperature was below 30 degrees. Still, somewhere between 50 and 100 people were on hand. They bundled up, sharing hand warmers and passing out hot chocolate. The scene seemed distant, both in time and temperature, from the scorching days of early summer when protesters first took to the streets in marches against the killing of George Floyd by Minneapolis Police Officer Derek Chauvin.

That first day was May 29th. In the weeks that followed, Milwaukee would witness protests and calls for change in American policing that were part of a larger movement happening in every major city in the land.

Marchers were in the streets protesting police brutality and it wasn’t long before they met with this themselves, as police at times responded violently, beating protesters, tear gassing them and shooting them with rubber bullets.

On some nights rioting and destruction broke out after peaceful marches had completed. Though this was nearly always followed by an effort the following morning to clean up the neighborhoods where this occurred.

The City of Milwaukee called a curfew. The Wisconsin National Guard was mobilized. But still protesters persisted. Marches would run all day long, twisting and turning for miles through the city, sometimes marching clear out of the city into the suburban North Shore, or west into Wauwatosa.

Some of the summer’s leaders had been activists for years, others were new to marching and organizing. But their names became associated locally with the movement for justice for the victims of police killings and for major reform of American law enforcement. They were people like Khalil Coleman, Destiny Monae, Vaun Mayes, Frank Nitty and Mariah Smith among many others.

The 200 days marker is significant to the protesters because in 1968 activists marched for 200 days in Milwaukee for fair housing and an end to racial discrimination. Shortly after the 200 days of protests, the U.S. Congress passed the Fair Housing Act of 1968.

Get a daily rundown of the top stories on Urban Milwaukee
Early on, back in the summer, organizers started saying they were going to match the fair housing marches with 200 days of action.

And so Milwaukee has seen 200 days of marches and protests for the second time in less than a century. However there is no grand legislation this time making its way through Congress, or even the state Legislature, to address policing and police killings. Republican legislators have suggested they may consider some kind of bill on this in 2021.

Protesters celebrated reaching 200 days, but emphasized that the movement was not ending Monday night. “Long live the revolution,” they shouted. And they sang, “The People’s Revolution has been fighting for 200 days, that’s right.”

The People’s Revolution has become the leading group protesting the City of Wauwatosa and the Wauwatosa Police Department over the killings of three black men by Police Officer Joseph Mensah, who recently resigned from the force.

Organizers addressing the crowd Tuesday night said 200 days was a “great milestone” and said “We should be damn proud of what we have accomplished so far.” But they said they will continue to march, because the families of victims of police killings are still waiting for justice.

Jose Acevedo, the father of Joel Acevedo who was choked to death by off-duty Milwaukee Police Officer Michael Mattioli, came to the march. He said his family continues to fight to have the body camera footage released, and to have the two men that helped restrain Acevedo while Mattioli choked him charged as accomplices in the murder.

Acevedo said it’s important to put pressure on elected officials. Milwaukee County Supervisor Ryan Clancy showed Monday night, with a citation from the county board commending the protestors for 200 days of marches. “We have failed as your electeds to actually promise action,” he said. “You are not out here marching every day demanding a piece of paper, you’re out here demanding defunding. You’re out here demanding nine other specific and reasonable things.”

Taleavia Cole, Alvin Cole’s sister, was at the march Monday. Her brother was one of the three men, including Jay Anderson, Jr. and Antonio Gonzales, who were killed by Mensah.

Photos from the Protests 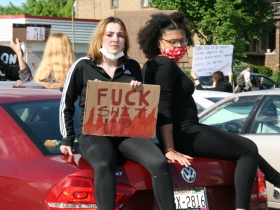 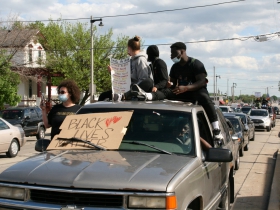 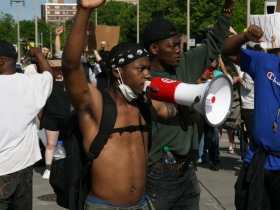 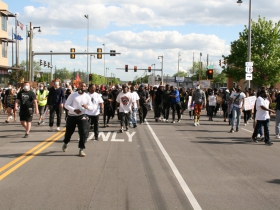 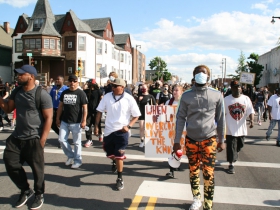 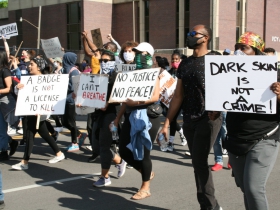