8 Injured In Shooting At Mayfair Mall

By WPR Staff, Wisconsin Public Radio - Nov 20th, 2020 04:08 pm
Get a daily rundown of the top stories on Urban Milwaukee 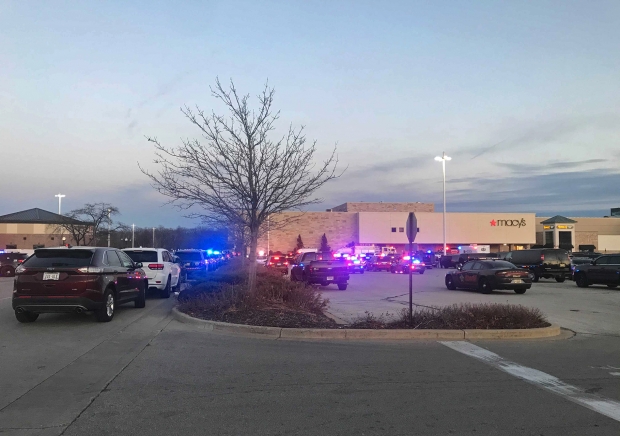 Eight people were injured in a shooting Friday afternoon at Mayfair Mall in Wauwatosa.

Seven adults and one teenager were transported to an unnamed area hospital after the shooting occurred at around 2:50 p.m., Wauwatosa Police Chief Barry Weber said in a media briefing shortly before 6 p.m.

The extent of the injuries for each person is unknown, Weber said, but no fatalities were reported as of 6 p.m.

The shooting happened near the northwest entrance to the Macy’s department store, Weber said. When law enforcement arrived, the shooter was no longer there.

Police are currently searching for the suspect, who is described as a white man in his 20s or 30s.

Police said that based on their investigation so far, they think the shooting was the result of an altercation and they don’t think it was a random act. Authorities are continuing to interview witnesses and plan to talk with the injured victims as they search for the suspect.

The mall is closed until further notice, and law enforcement is asking the public to stay away from the mall as it is still an active crime scene, Weber said.

“The crime scene is active, and we ask members of the public to remain away from the area and be patient so that our law enforcement personnel may secure the scene and investigate,” Weber said.

As of 7:17 p.m. people in the mall were still being released. People needing to reunify with loved ones can go to the reunification area at the At Home store, 3201 N. Mayfair Rd.

A statement released early Friday evening from Froedtert Hospital says two nearby hospitals were preparing to possibly accept patients from the shooting.

“Shortly after 3 p.m. Friday, Froedtert Hospital and Children’s Wisconsin were notified of a shooting at Mayfair Mall. Both hospitals’ trauma teams were prepared to receive patients. Additional questions should be directed to law enforcement,” according to Nalissa Wienke, media relations associate for Froedtert Hospital.

The Milwaukee County Medical Examiner tweeted at 3:42 p.m. it wasn’t responding to the shooting at the mall.

The Milwaukee Journal Sentinel reported commanders at the scene asked the mall to make an announcement that people in the building should shelter in place.

Several law enforcement agencies responded to the shooting, including the FBI and police from Wauwatosa, Waukesha, West Milwaukee and Franklin. Late Friday afternoon, a minimum of 20 responding vehicles were visible in one section of the parking lot, with about a dozen or more just in the area near Macy’s.

An unidentified man who spoke with a WPR reporter at the scene said his wife works at the mall and was inside at the time of the shooting. He said his wife texted him saying shots were fired near Macy’s.

Steve Humphrie’s 21-year-old daughter, Nadia Mitchell-Humphrie, was working at a Lenscrafters in the mall when shots were fired. She texted her father as soon as it happened, saying the shooting started at Macy’s and continued into the hallway.

Humphrie sped to the mall to meet her.

“I was anxious, worried, not knowing if your kid is safe. It’s a bad situation,” he said.

Mitchell-Humphrie was held in the mall for some time while officers searched the building, but the two ultimately reunited at around 5:20 p.m.

“We are disheartened and angered that our guests and tenants were subject to this violent incident today,” Lindsay Kahn, director of public relations, said. “We are thankful for our partners at the Wauwatosa Police Department and we are cooperating with them as their investigation develops. At this time, we need to direct you to WPD for comment.”

Gov. Tony Evers on Friday said on Twitter he was thinking of those injured and their families. He also wished the victims a speedy recovery.

“We are also thinking about all the customers and workers affected by this act of violence and are grateful for the first responders who helped get people to safety. As we learn more, we offer our support for the entire Wauwatosa community as they grapple with this tragedy,” he said.

Editor’s note: This is a developing story and will be updated.