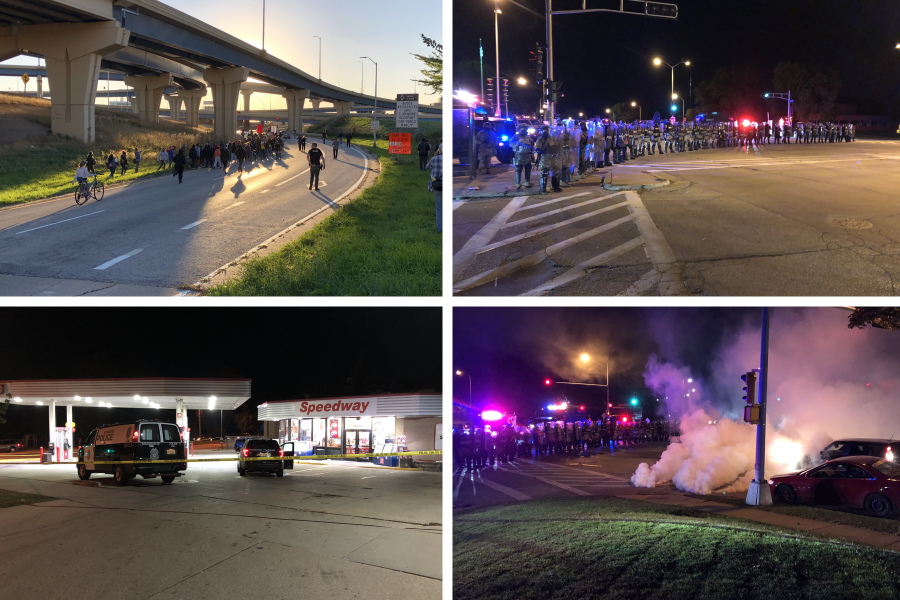 Scenes from the protest following the Mensah decision. Photos by Jeramey Jannene.

The decision not to pursue criminal charges against Wauwatosa police officer Joseph Mensah for the on-duty killing of Alvin Cole was not a popular one with several hundred people that had gathered outside the Milwaukee County Safety Building in downtown Milwaukee.

It was the third fatal shooting that Mensah has been cleared of in the past five years.

District Attorney John Chisholm announced his decision not to pursue charges Wednesday afternoon. What followed was a brief statement from Cole’s family and then a protest march that snaked from N. 9th St. to N. 100th St. on an anything but straight route.

Throughout the night the group would attempt to make their way to Mayfair Mall, site of the Mensah shooting and many 2020 protests. But law enforcement officers, including Wisconsin National Guard members activated by Governor Tony Evers, repeatedly blocked access to the mall.

Along the way the group, which ebbed and flowed in size from a couple hundred to around 50 on foot, drew cheers of support from onlookers, and tear gas from law enforcement. Isolated incidents of vandalism along W. North Ave. took place and a subset of those marching looted a gas station at 9200 W. Burleigh St.

Protesters took off south from the courthouse complex, with many marching west onto the Marquette Interchange and Interstate 94 via the W. Clybourn St. on-ramp at N. James Lovell St.

The well-outnumbered Milwaukee County Sheriff deputies at the on-ramp attempted to stop the marchers, but most in the crowd simply went around, including those in vehicles. A number of deputies arrived shortly thereafter and pursued the marchers, arresting at least two before releasing them at the end of the on-ramp.

Those that stayed on the freeway got off at the N. 25th St. off-ramp and made their way to N. 35th St. The group would head north to W. Center St., west to N. 60th St. and then would follow the Wauwatosa municipal border south to W. North Ave.

A 7:00 p.m. curfew was in effect by the time the group got to the Milwaukee-Wauwatosa boundary. But that didn’t appear to deter those in the group, which included prominent racial justice march leaders Sedan Smith, Khalil Coleman, Destiny Monae and Mariah Smith. A number of businesses also appeared to be open.

A couple of individuals in the march, primarily younger participants, began throwing eggs at different buildings, behavior that another reporter compared to “typical Wauwatosa crime.”

But the group then encountered an unusual sight for the affluent suburban community – a wall of law enforcement officers guarding the civic center. A number of armored vehicles were used, including humvees, MRAPs and Bearcats.

But after a momentary standoff, where law enforcement personnel on a loudspeaker could be barely heard over honking vehicles declaring the event an “unlawful assembly” and order people to disperse, the group simply continued west on W. North Ave.

A phalanx of sheriff deputies and Wauwatosa police officers with shields continued along the property’s edge, with a few stragglers in the group repeatedly insulting the riot-gear-clad personnel.

After passing the civic center, Urban Milwaukee observed one teenager hurl a small rock at Anytime Fitness at 8901 W. North Ave., shattering a window, before running away. No looting was observed and the individual ran away quickly. Others tipped over construction barricades in the street, while another individual tried to pick them up.

A block west, another reporter observed windows being broken at a Colectivo cafe and Swan Serv-U Pharmacy. Urban Milwaukee did not observe that vandalism as it happened.

The group was approaching the Menomonee River Parkway, where a large law enforcement roadblock awaited, and paused multiple times to develop a strategy. “White allies” were ordered to the front. The parkway’s intersection with North Ave. is one of a few eastern access points to the mall.

The group eventually reformed heading north, temporarily out of eyesight of this reporter. It was at this point that some individuals in the group looted a gas station at N. 92nd St. and W. Burleigh St. More tear gas was used, confirmed by the Wauwatosa Police Department, at N. 92nd and W. Melvina St.

Urban Milwaukee caught up with the group near W. Capitol Dr. and N. 100th St. It was in that area multiple law enforcement units would set up roadblocks, routing the group in different directions, but always away from the mall.

Urban Milwaukee at multiple points became caught between the two opposing sides, in what appeared to be increasingly a zero-sum cat and mouse game. Protesters on foot, followed by dozens of motor vehicles, made a circuitous route through the winding streets north of Hartung Park. Multiple times Urban Milwaukee encountered caravans of National Guard members in military transport equipment parked on residential side streets.

Get a daily rundown of the top stories on Urban Milwaukee
“Don’t start no shit, there won’t be no shit,” chanted the protesters as they sought to find a way to the mall.

In brief conversations, members of both sides would agree to cat-and-mouse assessment and suggest the other should simply “go home.” Some asked the same of this reporter.

Around 11:30 p.m. I departed. The remaining protesters were marching east on W. Burleigh St. while law enforcement personnel blocked passage to Mayfair Mall to the west.

For more on Mensah, Cole and the incident that led to the protest, see our coverage from Wednesday afternoon. A third-party report submitted to the Wauwatosa Police & Fire Commission recommends terminating Mensah.

A cleanup event, Let’s Heal Wauwatosa, is being hosted by County Supervisor Shawn Rolland and Representative Robyn Vining on Thursday morning from 6:00 a.m. to 8:00 a.m. outside Colectivo.

Group making it up on ramp onto Interstate 94 pic.twitter.com/Tq6j2iiajh