Protesters detail the use of spike strips, $1,300 tickets and racial profiling.

By Isiah Holmes, Wisconsin Examiner - Sep 19th, 2020 08:01 pm
Get a daily rundown of the top stories on Urban Milwaukee 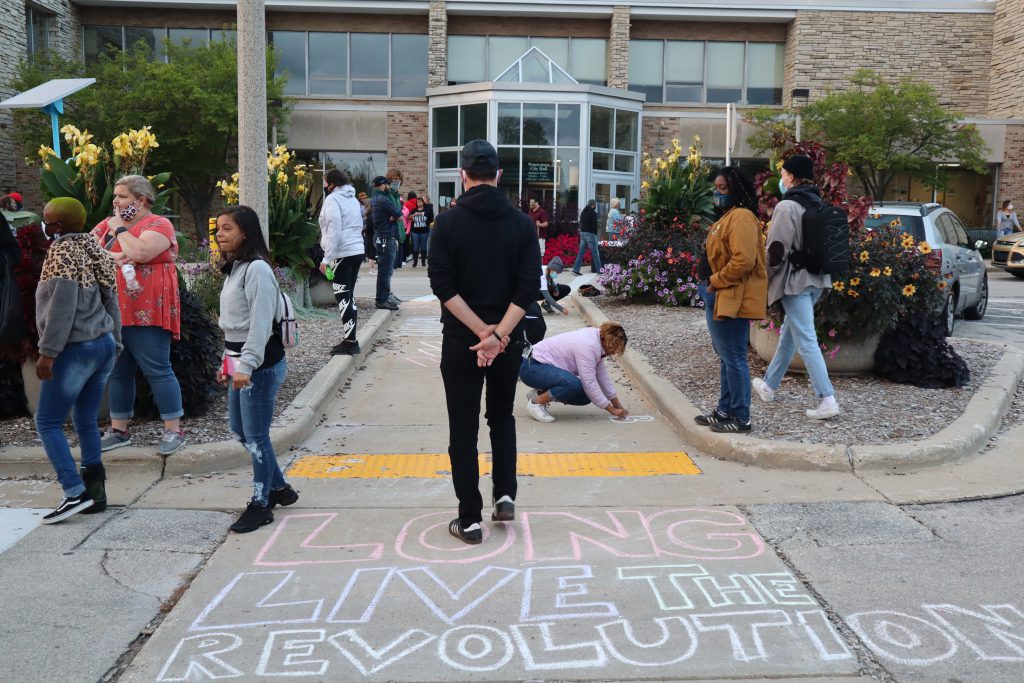 Protesters with The People’s Revolution stand outside Wauwatosa City Hall. The words “long live the revolution” was chalked on the ground. Photo by Isiah Holmes/Wisconsin Examiner.

Since August, the Wauwatosa Police Department (WPD) has deployed a variety of tactics against a group of Black Lives Matter protesters known as The People’s Revolution (TPR), in its efforts to more aggressively police the demonstrations in the suburb. These include laying spike strips in the road to halt car caravans, mailing protesters $1,300 citations and taking photos and video of marchers at protests.

“This type of policing is not an anomaly,” TPR’s press committee stated in a press release on September 14. “It is a pattern of abusive behavior in recent months.” The press release documented incidents stretching back into early August to better illustrate its claim of the pattern of behavior. One of the first major escalations occurred on August 14, on a suburban street in Wauwatosa.

Officers had monitored a protest, which included car caravans, as it crossed an eastern border between Wauwatosa and Milwaukee. With marchers in the streets, car caravans carry residents who don’t want to walk and also block intersections as marchers cross the street. After the caravan turned off into a side street, officers in marked and unmarked cars blocked the road and arrested a single protester. The person arrested was part of a group of protesters on bicycles who goes far ahead of the demonstration to direct traffic away from the oncoming marchers.

There followed an hours-long standoff between the marchers and Tosa PD. The department called in other suburban police departments to help form a line of riot shield-wielding officers. No property damage occurred, and officers eventually retreated and allowed the protest march to continue. The protester who had been arrested was released around an hour later. Protesters  complained of officers punching and shoving marchers. The standoff on Aug. 14 was the final day in a full week of similar confrontations between marchers and WPD.

The People’s Revolution’s press release also cites an event on Aug. 27, when WPD attempted to prevent protesters from entering the parking lot at Mayfair Mall. “The Wauwatosa Police Department blocked all entrances to Mayfair Mall and racially profiled occupants of cars to determine who would be allowed into the parking lot,” reads TPR’s release. “Those that were Black or ‘looked like protesters’ were not allowed in. In some cases officers deployed spike strips against the vehicles of people who fit their ‘profile’ even though they were just driving by on Mayfair Road.”

The following day, on Aug. 28, WPD released a press statement entitled “To the citizens of Wauwatosa, we’re out here. We feel your frustrations.” It stated: “Your Wauwatosa Police Department is out, on the streets, every day, all day. You may not always see us. You may not feel that we don’t take appropriate action when we should. We want you to know, we’re out here. We continue to take police action when it is justified, necessary, and advantageous.”

When Wisconsin Examiner inquired into the incident on Sept. 2, WPD press officer Sgt. Abby Pavlik said the reports hadn’t yet been finished. “However,” the sergeant said, “it appears vehicles were driving recklessly and spike strips were deployed. I do not have specifics.” Pavlik said that The People’s Revolution is not being targeted.

“The Wauwatosa Police Department responds to all protests within the city and monitors them. If enforcement action is required due to ordinance/traffic/law violation then those are handled on a case by case basis with the individual(s) committing the infraction(s). No specific group is being investigated.”

Pavlik also told Wisconsin Examiner, “the department will not be commenting on the press release from The People’s Revolution; we continue to support lawful and peaceful assemblies.”

Statements made by Chief Barry Weber and the president of the Wauwatosa police union, however, seem to very clearly single out TPR. Both men have condemned the group and anyone associated with it, particularly after a protest was held outside the home of Officer Joseph Mensah. After shooting three people in the last five years, Mensah has become a focal point for protests against WPD.

On August 8, after a confrontation between the officer and protesters, a gun owned by one of the marchers was fired. No one was injured, and WPD confirmed on September 17 to Wisconsin Examiner that the case remains open, despite the arrest of three men related to the incident.

Weber stated in a press release earlier that day, “The Wauwatosa Police Department will not stand by and allow this type of intimidating, aggressive, dangerous, illegal behavior to occur, especially under the guise of peaceful protest.” WPD has also condemned TPR marchers for picketing the houses of city officials, including Mayor Dennis McBride and Police and Fire Commission (PFC) president Dominic Leone.

More recently John Milotzky, president of the Wauwatosa police union, called on the chair of a newly formed systemic equity and policing committee to be removed, and said the committee should be disbanded. Milotzky made the statement after accusing the chair and others of having ties with TPR, which he characterized as a violent organization. Milotsky thereafter declared, “the [Wauwatosa Peace Officer Association] demands a detailed plan of action to immediately disband the ad hoc committee. This should identify measures to exclude members of The People’s Revolution from any proceedings pertaining to Officer Mensah, Chief Weber, and any other member of the WPOA.”

Nearly a week ago, an 18 and 19 year old from Menomonee Falls were mistaken for TPR protesters in the city. The pair were leaving Mayfair Mall when WPD officers swarmed their car, shattered their windows, pulled them out and questioned them in handcuffs. During the event, members of TPR who were part of the car caravan were arrested for reckless driving. The people who were mistakenly targeted are now considering legal action against WPD.

It wasn’t long after protesters began hearing WPD officers call them out by name and watching them take video of everyone that the tickets began arriving. Oddly enough, even though numerous TPR protesters have only recently received them, the citations mention events that are a month old. Several marchers received $1,321 tickets related to the Aug. 14 protest which turned into a standoff. Although the tickets were for disturbing the peace, they also mention obstruction and giving false information to an officer.

Many who received tickets in the mail were confused by that addition, and what they were actually being cited for. When Wisconsin Examiner contacted Sgt. Pavlik regarding the tickets, she asked for more specific information on who we were referring to.

After providing the information of a videographer, not a protester, who received a ticket Pavlik wrote back, “looking into the citation, he was not cited for providing false information. That is just part of the description that our system auto-populates into the citation. I suggest you file a records request for the entire report for further details.” Jacob Pick, who says he was punched in the face by an officer on Aug. 14, is one of the marchers who received a ticket.

“I think this is a disgusting underhanded petty way to silence people’s First Amendment rights by Tosa leadership,” he told Wisconsin Examiner. “They are not arresting us because they know how bad the optics will look. Instead they send tickets through the mail.”

The department has also begun providing security at the mayor’s house some evenings. On Sept. 2 a Wauwatosa officer, the only one with a riot shield that evening, maced a 17-year-old protester after the boy shined a light in his face. TPR cited this incident, among others, in its press release documenting the events. The group also condemned the use of “frivolous citations to try to intimidate protesters and suppress the exercise of their First Amendment rights.”

In addition to marching in the streets, The People’s Revolution has also been filing complaints against officers for conduct while policing the demonstrations. In addition, the group has been researching WPD, its past and the record of Chief Weber.

One of the best resources that the protesters discovered was the WPD annual reports, which were published on the city website. A few days ago, however, TPR protesters realized that WPD removed the reports from the website. These documents are intended to be publicly accessible, and read like field guides to WPD.

While the marchers feel the reports were removed after TPR began using them to learn about WPD Sgt. Pavlik said, “some of the information in the report is not up-to-date. They will be put back on the website in the near future.” No timeline, however, has been given for when WPD’s annual reports will re-enter the public domain. The last annual reports which were released covered up to the 2018-19 year.

On September 17, the PFC held a meeting with two complaints filed by Pick and another TPR protester against WPD personnel as items on the agenda. Pick’s complaint involves being punched in the face by an officer on Aug. 14, while the other protester filed a complaint after being maced alongside the 17-year-old on Sept. 2. The PFC quickly decided to forward the complaints to the police department to investigate its own conduct related to those incidents. The PFC also voted to pass new rules, including imposing a limit on how many days after an incident a person is allowed to file a complaint against an officer.

“The message is clear,” reads TPR’s press release. “Police abuse and violence is tolerated by the City of Wauwatosa and its leadership. It is not protesters who have been escalating, violent, damaged property, or harmed individuals; it is the Wauwatosa Police Department.” Speaking to Wauwatosa residents, The People’s Revolution stresses, “the actions of police against protesters, their attempts to silence their call for justice, must be condemned. We are counting on you to take the stand.”