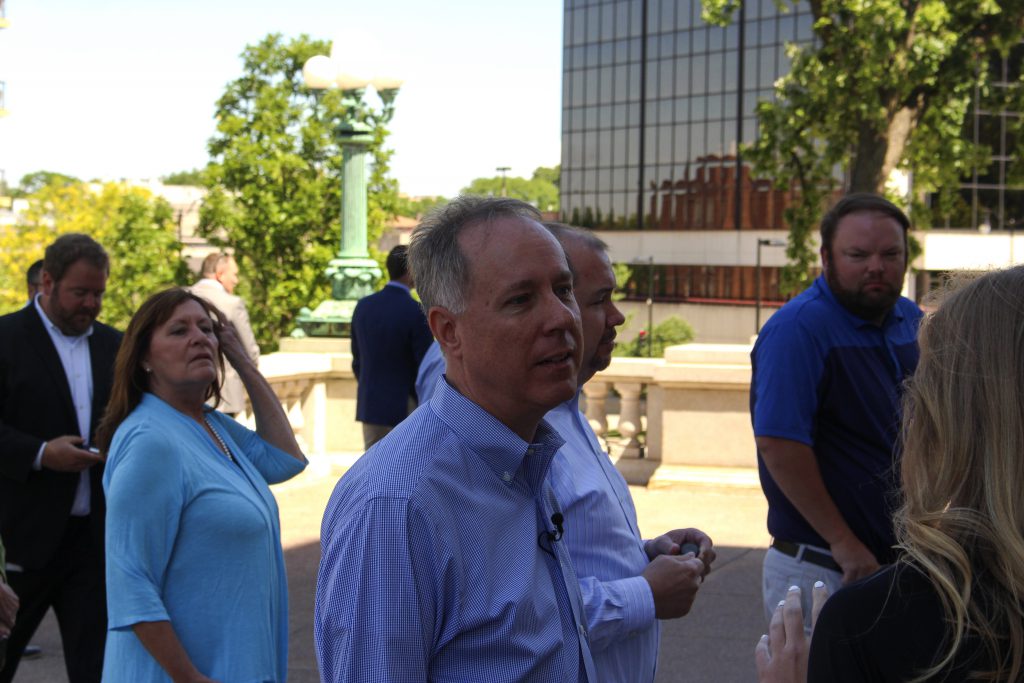 Robin Vos answers questions on June 24 after protesters tore down statues outside the state capitol. Photo by Henry Redman/Wisconsin Examiner.

In response to the killing of George Floyd by Minneapolis police officers, Wisconsin Assembly Speaker Robin Vos (R-Burlington) said action wouldn’t be taken until at least after the November election.

But after Kenosha police officer Rusten Sheskey shot 29-year-old Jacob Blake in the back seven times, paralyzing him from the waist down according to his family, Vos was prompted to move things along.

The shooting of Blake occurred less than an hour from Vos’ front door, and Gov. Tony Evers has been calling for legislative action since he introduced a series of bills on racial injustice and policing more than two months ago. (He has now called the Legislature into a special session to address racism and police violence, although Vos has repeatedly refused to go along with the governor’s special sessions, which he has derided as posturing by trying to tell the Legislature what to do.)

So with the people of Kenosha, Wisconsin and the country demanding change, Vos called for a task force.

“This is not a time for political posturing or to suggest defunding law enforcement,” Vos said in a statement. “When a community is hurting, the most important thing that we can do is to listen. That is why today, I am announcing a Speaker’s task force focusing on racial disparities, educational opportunities, public safety, and police policies and standards. We must find a path forward as a society that brings everyone together.”

In 1895 journalist and activist Ida B. Wells published “The Red Record: Tabulated Statistics and Alleged Causes of Lynching in the United States.” Wells’ accounting of lynchings in the post-Civil War South is one of the country’s first reports on racial violence that did not seek to justify the acts of white people.

In a 19th century version of data journalism, Wells tracks the numbers of lynchings committed in 1893 and details the brutal specifics of some of those cases.

She also lists a number of ways lynchings can be prevented. These include sharing the truth, urging community organizations to speak out, preventing labor unions from forming in “lynch infested localities” and passing a Congressional resolution to track the annual number of lynchings in the U.S.

“The very frequent inquiry made after my lectures by interested friends is ‘What can I do to help the cause?’ The answer always is: ‘Tell the world the facts,’” Wells wrote.

The country still does not have a federal anti-lynching law. The George Floyd Justice in Policing Act, passed by the U.S. House of Representatives in June, included the establishment of a registry to track the annual number of police misconduct complaints in the U.S.

The FBI has attempted to track the number of police shootings per year, but compliance from local departments has been a problem. Using police reports, social media and news accounts, a Washington Post database is the best resource for tracking police violence.

In each of the last four years, police in the U.S. have killed nearly 1,000 people each year, according to the database.

The world had the facts, but structural racism remained firmly in place.

On July 27, 1919, a fight broke out on a Chicago beach after some Black residents crossed the established line between the white and Black portions of the beach. A Black teenager, Eugene Williams, who was swimming, drowned while white beachgoers threw rocks at him. The white man who was believed to have thrown the rock that struck Williams, leading to his death, was not arrested, despite the fact that a police officer was on the scene.

Homes in the predominantly Black neighborhoods of the South Side were destroyed or burned down. Gangs of white men, members of so-called “athletic clubs” roamed the streets, beating Black men who were on their way to work — with the implicit permission from the police.

In response to the Chicago riot, Illinois Governor Frank Lowden established a commission to determine what had happened.

Lowden called the commission’s final report, published in 1922, the most thorough account of race relations ever.

“The Commission on Race Relations, composed of distinguished representatives of both races, has made the most thorough and complete survey of the race situation that I have seen anywhere,” Lowden wrote in the report’s introduction. “While its field of study was necessarily limited to Chicago, the conditions there may be regarded as fairly typical of conditions in other large cities where there is a large colored population.”

The Chicago commission thoroughly dissected the events leading up to the riots and what transpired in those 13 days. But its report also detailed how Chicago became segregated, how the Great Migration affected the city and the relationship between Black Chicagoans and the police.

The report found that homes owned by Black people in Black neighborhoods were valued less than similar white homes — a practice still occurring in the U.S. — and that the education system for Black kids was failing.

“[Black people] in Illinois are legally entitled to all the rights and privileges of other citizens,” the report states. “Actually, however, their participation in public benefits in practically every field is limited by some circumvention of the law.”

Ultimately the report made almost 60 recommendations to improve race relations and the lives of Black people in all aspects of life in Chicago. It advocated for better, less segregated housing, a better education system, access to jobs and unions and pushed the city’s white-owned newspapers to be less racist in their coverage.

In 2020, Chicago is still segregated, its schools are still unequal and its newspapers are often criticized for missing the mark.

In Harlem in 1935, rumors spread through New York City that a young Black boy was beaten and killed for stealing a knife from a store. Those rumors started a riot. Mayor Fiorello LaGuardia’s “Commission on Conditions in Harlem” included founders of the ACLU and NAACP.

That commission, despite the New York City Police Department refusing to participate, found that the conditions of the city’s housing and schools, the lack of access to jobs for Black workers and lack of adequate healthcare caused the riot.

“Every chapter presented an indictment of how the City was serving the 200,000 black residents of Harlem,” Pauline Toole, commissioner of the New York City Department of Records, wrote about the report.

A recent report from a nonprofit think tank found that Black New Yorkers are underrepresented in the city’s highest paying industries while also maintaining a “strikingly large” income gap between Black and white workers in those industries.

New York’s racial disparities were only deepened by the COVID-19 pandemic, as people’s health outcomes are often tied to the zip code they’re from.

In 1943 a riot broke out in Detroit. The official government report largely blamed the Black population, so Thurgood Marshall — then a young lawyer for the NAACP — commissioned his own report called “The Gestapo in Detroit.”

After a series  of riots across the country in 1967, President Lyndon B. Johnson established a commission to figure out the cause. The “Kerner Commission” as it came to be known made a simple finding.

“This is our basic conclusion: Our nation is moving toward two societies, one black, one white — separate and unequal,” the report states.

By 1977 the country had seen its fair share of reports, task forces, commissions and advisory boards to know they’d ultimately find the same answers. A study published that year found that at least 21 commissions on race were appointed between 1917 and 1943.

That study, “Commission Politics: The Processing of Racial Crisis in America,” argues that appointing a commission or task force is a way for politicians to appear to be taking action, without actually having to do anything.

“Riot commission politics is part of the process by which the United States purchases system stability at the expense of blacks and through explicit and implicit mechanisms which substantially insulate the system from their political influence,” the study’s authors, Michael Lipsky and David Olson, wrote.

By removing Black voices from the political system, Lipsky and Olson argue, the commission is a way to calm down tensions after a riot in a largely inoffensive way that doesn’t spend any political capital.

In fact, the creation of a commission “permits an executive to defer action while appearing to act and allows him to appear to be a leader and fulfill the needs of his constituents without taking substantial action.”

Nearly 50 years after the publication of that study, Michael Brown was killed in Ferguson, Missouri and the Black Lives Matter movement was born. In response to protests in that city, President Barack Obama commissioned his “Task Force on 21st Century Policing.”

While the task force mostly proposed specific policies meant to improve community relationships with the police, it also suggested Obama implement “programs that take a comprehensive and inclusive look at community-based initiatives addressing core issues such as poverty, education, and health and safety.”

Programs not much different from the access to better housing, schools and healthcare proposed in reports commission in 1919 or 1935.

When asked by Gov. Evers to take action and pass actual legislation, Vos attacked the call for a special session as “politics.”

“One hour after the announcement of the speaker’s task force, Governor Evers releases a Special Session call of the Legislature,” Vos said in a statement. “When I spoke to Governor Evers on the phone today, I asked him to work with the Legislature in a deliberate and open process through the task force. We have an opportunity to bring people together to find solutions. Instead, the governor is choosing to turn to politics again by dictating liberal policies that will only deepen the divisions in our state.”

Vos has already put out requests for legislators and community members to serve on his task force. A spokesperson did not respond to questions asking what the task force hopes to find that hasn’t already been found in the previous century of commissions on race.