Kenosha and Madison don't see the violence of the previous nights.

By WPR Staff, Wisconsin Public Radio - Aug 27th, 2020 12:45 pm
Get a daily rundown of the top stories on Urban Milwaukee 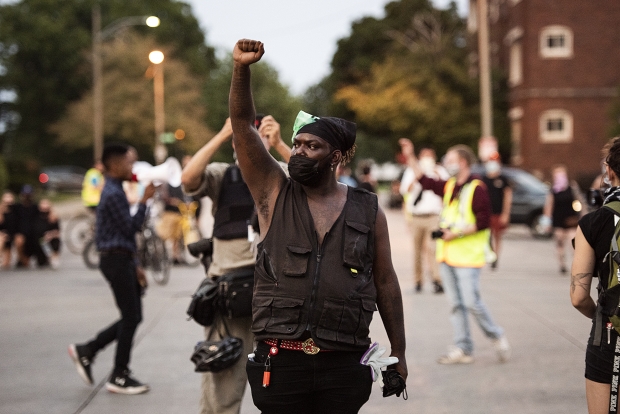 A protester who goes by Spaidez raises his fist as the protesters block off an intersection during their march Wednesday, Aug. 26, 2020, in Kenosha. Angela Major/WPR

For the fourth night in a row, protests occurred in Kenosha on Wednesday night over the police shooting of Jacob Blake, but were mostly peaceful following Tuesday night’s fatal shootings and unrest.

At around 9 p.m. Wednesday, some protesters in Kenosha had been marching and chanting, defying the curfew, but there were few signs of police presence on the streets and no signs of violence.

A couple of hundred protesters gathered outside the Kenosha County Courthouse and marched around the city repeatedly, but police and National Guard soldiers mostly stayed out of sight.

Kenosha resident Porche Bennett was among those who gathered in the city square earlier in the evening. She urged people to go home to avoid violence.

“I don’t want what happened last night to happen again, you know what I mean? Now anything that happens after the curfew, when they see the peaceful ones leave … I hate to say it, but we’re not responsible for that. We want them to be safe and we want them to go home,” Bennett said.

Kejuan Goldsmith, 19, of Racine, was among those demonstrating. He said he wanted the officers who shot Blake to be punished. 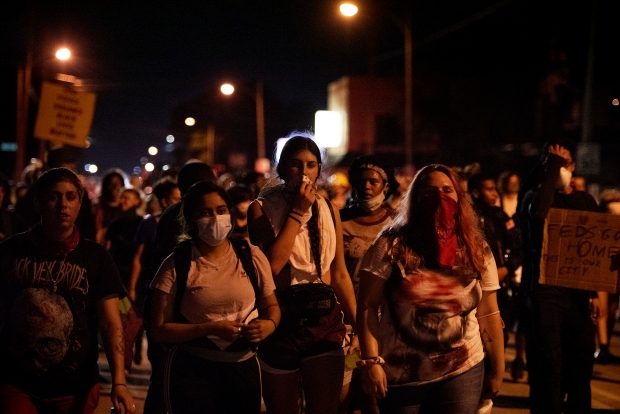 “Right now, I want to see those officers arrested. That officer needs to be arrested or he needs to lose his job. Period. Nothing more, nothing less. The matter of fact that he’s sitting at home getting paid pisses me off and everyone out here off,” he said.

Sam Vong and his family have owned Madame Pho on Highway 50 and Interstate 94 for seven years. On Wednesday, they boarded up their windows before the city’s 7 p.m. curfew. 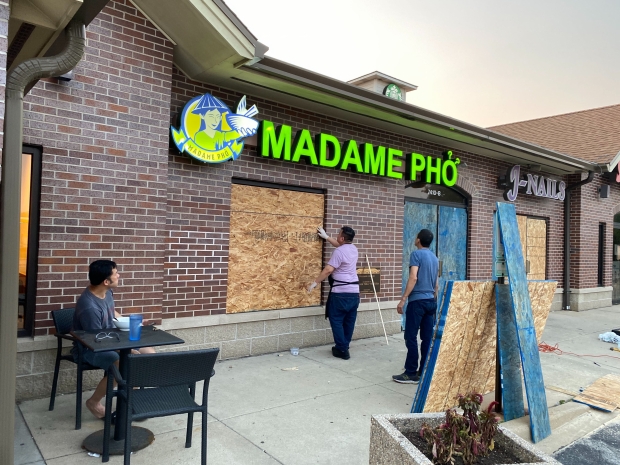 “For the first time ever, you feel like you live in fear in your own place,” Vong said. “I don’t know when it’s going to end. And I hope that it will end soon. We’re just waiting for someone to actually do something to actually help us as a small business.”

Vong said he doesn’t know exactly what happened between Blake and police, but he just wants to protect his family, employees and their customers.

As of early Thursday morning, there were no groups patrolling the southeastern Wisconsin city with long guns, as there were during previous nights of protests. 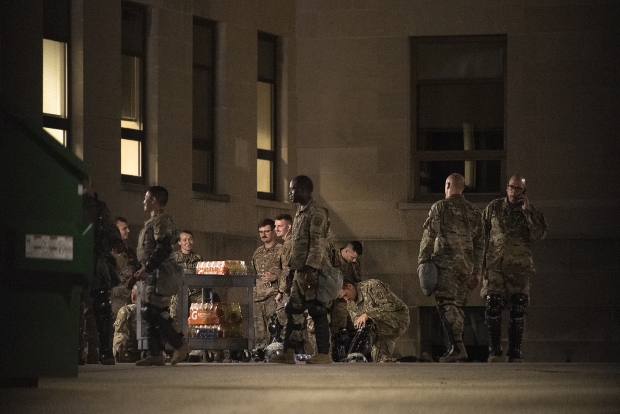 People in uniforms gather behind the Kenosha County Courthouse behind a large black fence that surrounds the building Wednesday, Aug. 26, 2020, in Kenosha. Angela Major/WPR

Protesters on Wednesday night also stayed away from a courthouse that had been the site of standoffs with law enforcement.

Gov. Tony Evers announced an increased National Guard presence in the city. The increase to 500 troops in Kenosha comes after two protesters died in a shooting the night before.

Earlier on Wednesday, law enforcement agencies announced at a joint press conference on Wednesday that the curfew for the city had been pushed up to 7 p.m., and that officers would arrest anyone in violation.

Kyle Rittenhouse, 17, of Antioch, Illinois, was taken into custody on Wednesday on suspicion of first-degree intentional homicide in Tuesday night’s shootings. The teen was apparently a police admirer and is accused of shooting three protesters, killing two of them. Illinois authorities arrested Rittenhouse Wednesday on first-degree homicide charges.

Authorities haven’t released the names of the victims, but said the two men killed were a 26-year-old Silver Lake resident and 36-year-old Kenosha resident. A 26-year-old West Allis man was also shot in the arm and is expected to recover.

The crowd of 250 to 300 walked downtown streets chanting, giving speeches and urging onlookers in student apartment building to join them.

An organization called Impact Demand organized Wednesday’s protest. The group has been behind many of the protests since the death of George Floyd in Minneapolis in May.

The nightly demonstrations began after police shot Blake, a 29-year-old Black man, in Kenosha on Sunday. Blake was injured in the shooting and was left paralyzed. 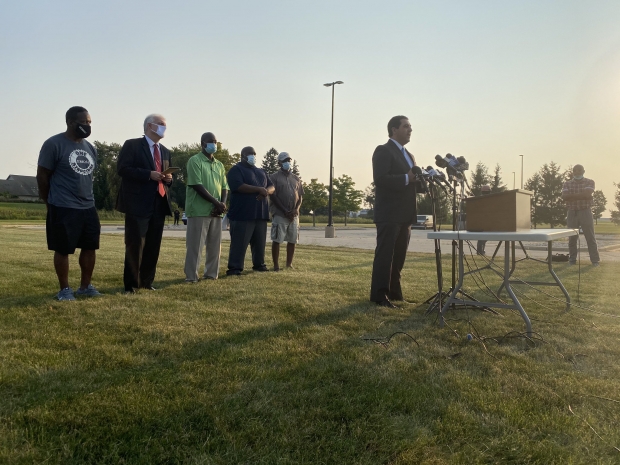 The Wisconsin Department of Justice released a new statement Wednesday evening that said one of the officers involved in the stop that ended with Blake being shot attempted to use a Taser to stop him from walking away, but it was unsuccessful.

Blake told police after the shooting that he was in possession of a knife. It’s unclear if officers thought the knife was on Blake’s person when he was shot.

The officer who on Sunday shot Blake in the back seven times was Officer Rusten Sheskey, a seven-year veteran of the Kenosha Police Department, said Wisconsin Attorney General Josh Kaul in the statement and at a press conference in Kenosha. Video of the incident circulated widely on social media and set off massive protests as well as vandalism and arson.

Kaul released other details from the investigation into the police shooting in his 6 p.m. press conference:

Officers including Sheskey are on administrative leave, Kaul said.

At Kaul’s press conference, Kenosha Urban League President James Hall urged protesters to respect the curfew, “so that no one else gets hurt.”

“Right now, Kenosha is emotional,” Hall said. “Right now, the country is emotional. We cannot continue to meet force with force … Change is now. If Kenosha can make this change, the entire country will follow.”