We've published so many stories that have moved the city forward. And you can help support this. 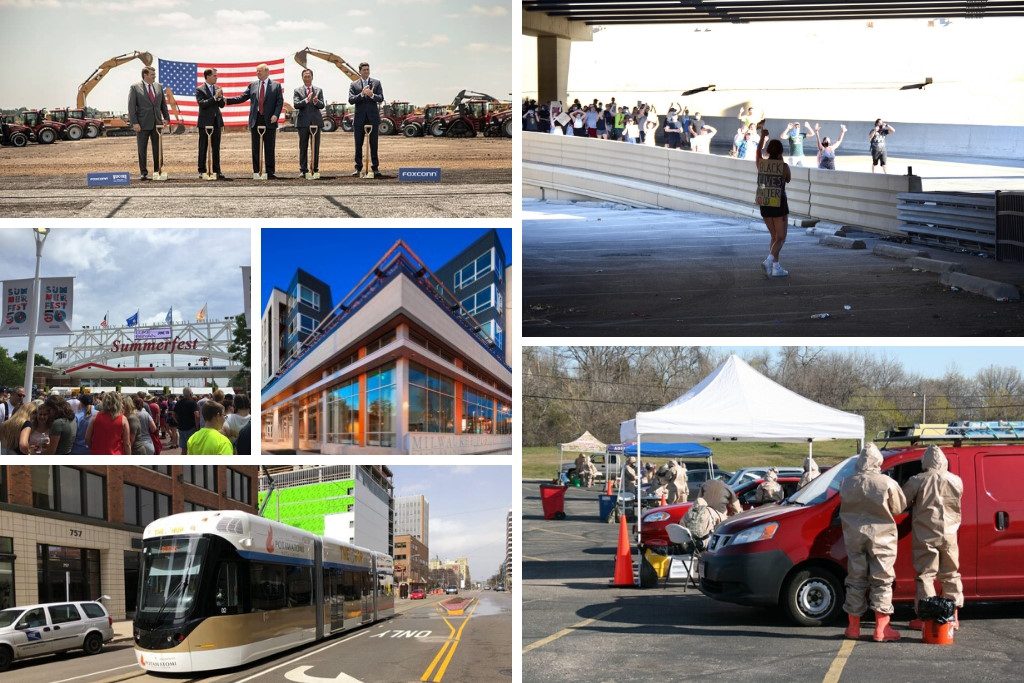 Some of the stories we’ve covered over the past 12 years.

This June, Urban Milwaukee is celebrating its 12th year of operation, 12 years of publishing news important to Milwaukee. Our business began in 2008, and ever since our team of journalists and staff have kept their ear to the ground, and their best walking shoes nearby in order to chase the stories Milwaukee citizens need to hear about. In celebration, let’s look back at some pivotal stories Urban Milwaukee has covered in this past decade (plus two years):

Now known as the Hop, the idea of a streetcar showed up on Urban Milwaukee’s website before we were considered a business back in 2007. Since then 192 articles and press releases have been published related to the idea of the streetcar, budgeting for it, placement, legislative ruling, roadblocks, support for it, protest against it, and much more. Although the idea took roughly 11 years for the Hop to come to fruition, Urban Milwaukee made sure to be there for every important story that arose on the subject.

Now a staple in the East Side neighborhood on North Ave., the Standard at East Library was a hot topic back in 2010 when the original stand-alone building had become obsolete. After many public meetings, all covered by Urban Milwaukee, the library was replaced by a complicated public-private partnership that combined a new library with an upscale apartment building. A revelatory idea at the time, the library and apartment complex still remain a success today and the city continues to replicate the model.

Another topic that seems to be a consistent one in the Milwaukee newsreel, Foxconn rumors began in 2017 and have yet to cease. Urban Milwaukee has remained a leader in discerning what statements related to the company and its mysterious plant in Racine County, are factual and which ones cross the line. Keep up to date with Murphy’s Law for regular updates and illuminating information on the company.

In late 2019, Urban Milwaukee was the first to uncover that the non-profit Summerfest is collecting more revenue than people might think. Charging ethnicity festivals high rent while paying little in comparison to the city, along with its lucrative deal from the city for the festival’s security, and compounded by the hefty large pay package for CEO Don Smiley, put the Milwaukee World Festival in a rather shocking spotlight last year.

The discussion of COVID-19 pops up everywhere you go. But what stories are real and what are drawn up to scare you? Urban Milwaukee has spent countless hours researching and writing reports to keep our readers as updated and safe as possible. Our Coronavirus page is dedicated to getting important information, finding ways to help others, and gathering helpful tips to keep you safe, healthy and entertained during self quarantine and while any safer-at-home policies have been enacted or altered.

Coming into the present day, Urban Milwaukee’s Jeramey Jannene and Graham Kilmer have been on the ground covering numerous protests. That means hours of screaming, walking, sweating, and sunburning have been captured by our journalists out on the frontline of these protests. We believe it’s crucial that the unfiltered version of everything that is actually happening during these protests is captured. Our George Floyd Protest page is regularly updated with ours and other journalist’s live tweets during the walks, and regular updates on what is rumor and what is truth.

Urban Milwaukee has been a leading voice on issues like legislative gerrymandering, the end of city residency requirements, safer bicycle friendly policies, state shared revenue to the city and county, and so many issues related to real estate development in Milwaukee. We believe our readers want and value in-depth analysis of such issues and we do our best to deliver that, while also including fun stories on new bars, restaurants, arts and entertainment. Heck, we’ve even kept those stories coming after a fire took out our office, that’s the kind of crazily dedicated journalists we are.

But none of these stories could have been published were it not for the support we’ve received over the past 12 years. Our paying members are the main reason we have been able to grow as a business and add writers to our team. Please consider becoming a paying member of Urban Milwaukee for only $9/month or $99/year.

By becoming a member you can get:

Become a member today so we can keep covering the most important stories for another 12 years and beyond.