Day 11 of Protests, No End In Sight

Destiny Monae and Vaun Mayes share their thoughts on what comes next.

By Jeramey Jannene and Graham Kilmer - Jun 9th, 2020 12:38 am
Get a daily rundown of the top stories on Urban Milwaukee 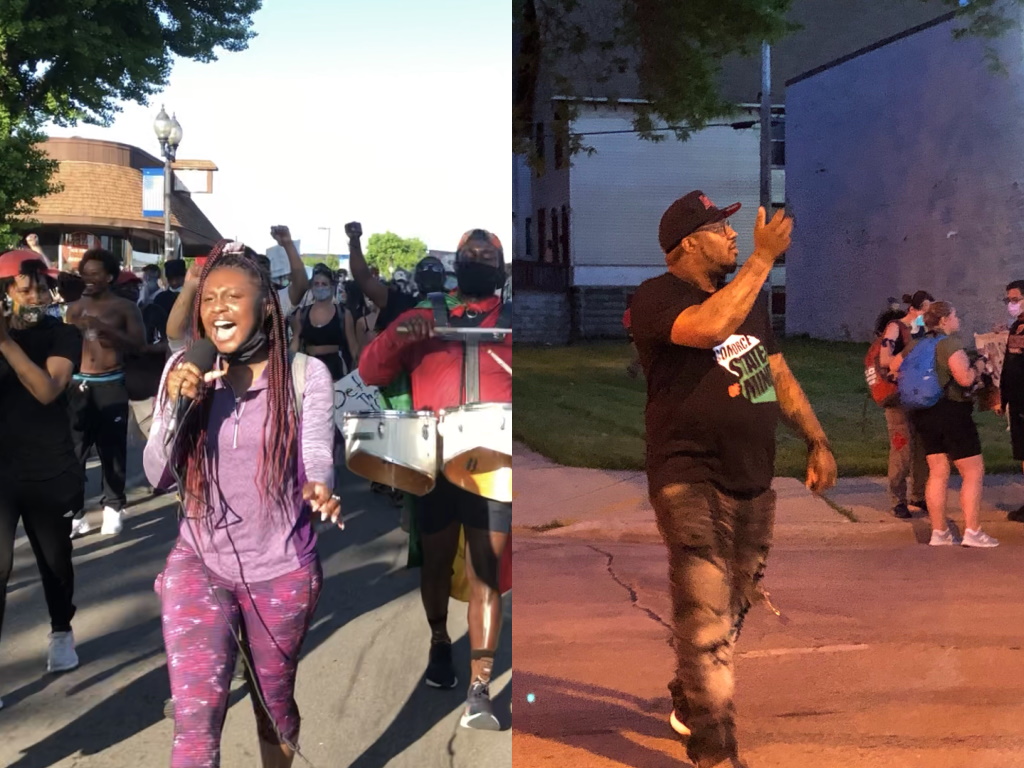 While a now-international movement to reform police practices and oversight continues to grow, many Milwaukee marchers expect to be marching for a long time.

Milwaukee’s fair housing marches, which went for 200 days in 1967 and 1968, are seen as a benchmark. And a number of march organizers have already indicated they’re ready and willing to go longer if need be.

One of those marchers is Destiny Monae, who can often be spotted at the head of marches in Milwaukee leading chants with a bullhorn. What fuels her? “Compassion,” said Monae in an interview with Urban Milwaukee.

Monae said the support the marches are seeing has changed.

“We’re no longer trying to convince you that black lives matter, now we’re getting you to agree with us,” said Monae.

But when will she know the system has changed? “When we get our laws changed. When police are fired without pay,” she said. Monae said officers need to face consequences.

“Once we see change we’ll stop walking, until then we’ll keep walking and disturbing the peace peacefully,” said Monae. She said those at home can help by sharing the positive messages emerging from the movement.

Another committed marcher is community organizer and activist Vaun Mayes. You can often find Mayes at the marches live streaming the action on Facebook, where he provides both commentary on what’s happening and engages with those offering support.

Mayes led a march from Milwaukee’s Lower East Side to suburban Shorewood early Monday evening. Once there, the group rallied outside the house of the Stephanie Rapkin, the “Shorewood Spitter” that was arrested after allegedly spitting on a black teenager at a George Floyd protest Saturday. She later would shove a college student drawing chalk sayings on the sidewalk outside of her house and knee a police officer in the groin.

During the March, Mayes told Urban Milwaukee in an interview that with the ongoing protests, especially with the massive marches seen last week, now is the time to act on issues of police reform. “I mean, maybe the planets are aligning right now, but we gotta take advantage of it and that’s what I’m trying to do.”

Mayes called on leaders like Mayor Tom Barrett and Police Chief Alfonso Morales to “do the right thing” and show tangible actions they are taking to address the concerns highlighted by protests over the past week. However, Mayes said, the commission recently announced by Barrett is not that.

Referencing the Community Collaborative Committee’s report and the U.S. Department of Justice’s draft report highlighting areas for reform locally, Mayes said: “Why do we need to create anything new?” He called the new commission a “farce” and an attempt to “appease people by creating something and seeming as if you’re doing something.”

There are immediate issues on the horizon, like the six-month review of Morales’ contract renewal, and there are also issues months into the distance. The city budget process doesn’t start until September.

The budget, which will control how large the Milwaukee Police Department is, is set by the Common Council, not the Fire & Police Commission that oversees department practices and discipline.

Black Leaders Organizing Communities (BLOC) asked the Common Council in 2019 to remove $25 million from the approximately $300 million MPD budget and commit it to public health. The council ultimately reduced the number of positions for sworn officers by 60 to 1,804 through attrition, not layoffs, in its $1.6 billion budget. A number of budget amendments funded violence prevention initiatives.

While that fight looms in City Hall, people keep showing up on city streets. The marches continue to multiply, with more than 10 held this weekend and multiple again held on Monday.