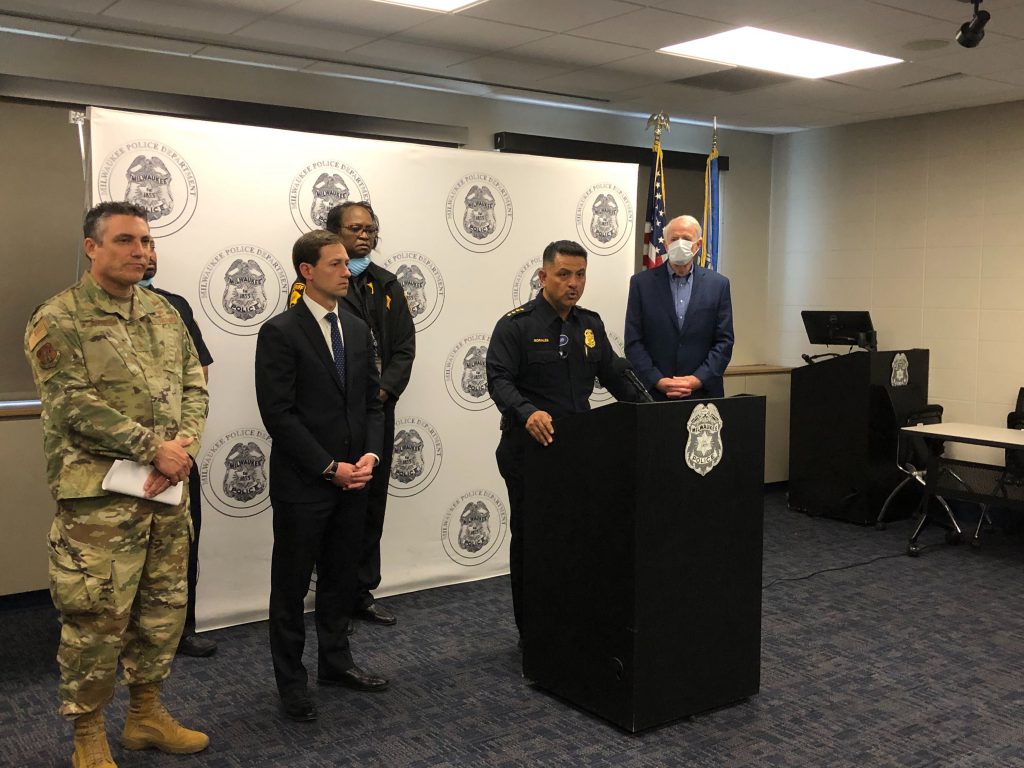 Milwaukee Police Department Chief Alfonso Morales believes that law enforcement across the country is in danger of being crucified like Jesus Christ.

“Something happens in another city in another state and it’s very easy to jump on the bandwagon and say Milwaukee can do better. Shame on those,” said Morales in a press conference on Friday afternoon, referring to murder of George Floyd under the knee of a Minneapolis police officer. “That’s a very easy narrative to jump on.”

“Two-thousand years ago an angry mob came before people to say ‘crucify that man,’ that man being Jesus Christ,” he said. “What are angry mobs doing today? We say we are civilized. But are we really? Just think about that.”

“Law enforcement is being crucified,” said Morales in response to a question on what he meant. “That’s what they want. That’s what these angry mobs are doing. There are several different groups out there protesting, there are peaceful protesters that are angry for what happened in Minnesota and we get that and we will work with them.”

“There are also people taking advantage to loot our city, to burn our city,” said Morales. With the exception of Friday, May 29th, particularly near the police station at 300 W. Locust St., no images or videos of angry mobs in Milwaukee have emerged.

The Milwaukee Common Council also wants the violence to stop, but 13 of its 15 members signed a letter Monday asking Morales to stop chiding peaceful protesters and instead listen to what they have to say.

“The current historical moment – in Milwaukee and throughout the nation – is not a competition to claim the right to religious analogies,” the letter declared. “It is a demand for justice, something for which too many have already died. It is a demand for significant and immediate structural reform of all police departments – including ours – to make sure George Floyd’s name is the last.”

The letter listed the names of seven individuals who have died or been seriously injured from interactions with the Milwaukee Police Department in recent decades; Joel Acevedo, Sylville Smith, Dontre Hamilton, Derek Williams, Tony Bean, Frank Jude and Ernest Lacy.

“We say all of these names, we celebrate their lives, and we mourn their violent deaths,” wrote the council members. “Let’s stop dying for justice and start achieving it.”

The members also took issue with the fact that Morales only briefly appeared at a three-hour council meeting to review the use of a curfew and other police tactics. The police response was instead led by Assistant Chief Michael Brunson. Mayor Tom Barrett stayed for approximately two hours at the meeting.

Before comparing law enforcement to Jesus, Morales did acknowledge that the department continues to work to comply with a settlement in a case brought forth by the American Civil Liberties Union, which charged that the department was guilty of unjustified stop and frisk actions that disproportionately affected black and Latinx citizens. Morales said he is committed to building better relationships with the community.

He also continued his message that the media needs to report more on vandalism, saying that perceptions about what is happening are inaccurate. “That includes you media, you can play a big role in changing the perceptions that are out there there,” said the chief.

Public comments are due June 12th on a six-month performance review for Morales’ four-year contract.

Why The Press Conference?

A press conference led by US Attorney Matt Krueger announced charges of attempted arson and possession of a destructive device against Tyshaun Smith.

Smith was apprehended near a Boost Mobile store at 949 N. 27th St. late on May 31st when an officer watched him throw what is believed to a Molotov cocktail at the store.

“Smith was holding what appeared to be a Molotov cocktail,” said Krueger. He said Smith was apprehended with gasoline on his hands.

Krueger’s remarks including an implicit push to not defund the police, a movement that is growing nationwide.

“Ask yourself what if law enforcement did not have the resources to respond quickly to the entry at the Boost Mobile store? What if they didn’t get there right away to put that fire out?” asked Krueger.

Black Leaders Organizing Communities (BLOC) asked the Common Council in 2019 to remove $25 million from the approximately $300 million MPD budget and commit it to public health. The council ultimately reduced the number of positions for sworn officers by 60 to 1,804 through attrition, not layoffs, in its $1.6 billion budget. A number of budget amendments funded violence prevention initiatives.