March goes over 15 miles, including through Whitefish Bay, Shorewood and Glendale, before ending back in Milwaukee. 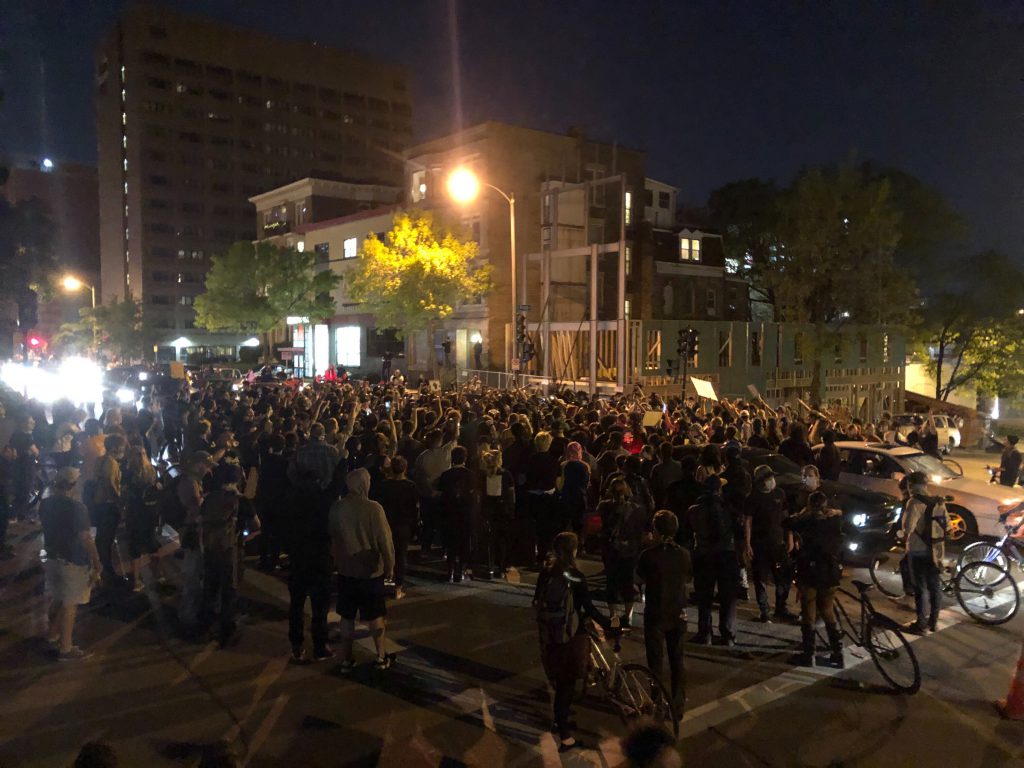 A rally in the intersection of N. Milwaukee St. and E. Knapp St. during the protest march. Photo by Jeramey Jannene.

A peaceful protest ended just before 3 a.m. Tuesday morning near W. Capitol Dr. and N. Port Washington Rd. when it was broken up by the Milwaukee Police Department.

The march marked the fourth night of protests in Milwaukee against the killing of George Floyd at the hands of a Minneapolis police officer.

The march had started almost 10 hours prior a mile and a half to the south at N. Martin Luther King Jr. Dr. and W. Locust St. But the group, which grew and shrank in size throughout the march, didn’t take a straight route.

Urban Milwaukee’s Graham Kilmer described in an earlier piece how the group, led by Frank Nitty, crisscrossed the Harambee, Bronzeville, Westown, Lower East Side and East Town neighborhoods before arriving at Red Arrow Park for a rally at the location where Dontre Hamilton was killed at the hands of a Milwaukee Police Department officer in 2014.

Just before 9 p.m., when a citywide curfew went into effect, I began following the group on a march that went south from Red Arrow Park to the Historic Third Ward, back up through East Town, east on Brady Street, up N. Prospect Ave. and N. Maryland Ave. before heading north on N. Oakland Ave. towards Shorewood.

The group featured hundreds of walkers and dozens of cars, many of which had multiple passengers, including those dangling out the windows.

When marchers arrived at E. Capitol Dr., suburban police officers attempted to force the group west, but the group on foot, after pausing to rally, marched straight north past the officers. The officers on hand were only able to redirect automobiles west.

The protesters marched through suburban Shorewood and onto Whitefish Bay and N. Lake Dr. ultimately heading west on E. Silver Spring Dr. and into Glendale with police officers funneling them past Bayshore Town Center and south onto N. Port Washington Rd., back towards the City of Milwaukee.

In total, the route exceeded 15 miles.

Along the way the group cycled through a long list of chants, including “no justice, no peace” and “hands up, don’t shoot.” The cars trailing the protest spent a lot of time honking.

Whenever someone was spotted looking on from a balcony the marchers would bust out in a chant of “walk with us” which resulted in at least one person on E. Brady St. joining the group.

Representative David Bowen was spotted in the group when it entered the suburbs and Office of Violence Prevention director Reggie Moore was spotted walking alongside the march on N. Water St. Former Milwaukee Bucks forward Jabari Parker, currently with the Atlanta Hawks, attended the earlier part of the march.

Because it was peaceful, it doesn’t mean participants didn’t damage any property. At multiple points, Urban Milwaukee captured cars driving on sidewalks and lawns. Milwaukee police chief Alfonso Morales had described the reckless driving as “4,000 pound bullets” in a press conference earlier Monday.

The group was largely self-policing. When a garbage can was tipped over in the Historic Third Ward, someone with a megaphone called on people to pick it up and a group quickly did.

When a white male ran across an empty lot to spray paint an anarchy symbol on the Avenir apartment building on N. Jefferson St., the group caught the person coming back and yelled for the individual to give up the can. After obtaining the can, the individual was kicked out of the group to applause.

The management of Otto’s Wine & Spirits, 3476 N. Oakland Ave., hired private security guards to hand out water bottles. The march, dominated by motor vehicles the night before, had resulted in a police SUV being damaged near the store on Sunday night.

While Urban Milwaukee spent the last few miles tracking the group with a car, the Milwaukee Police Department separated us from the group with roadblocks and blocked access to Port Washington Rd. from south of W. Capitol Dr.

According to the accounts of multiple protesters, as the remaining walkers and drivers approached W. Capitol Dr., they were diverted onto a side street and effectively cornered when tear gas was deployed and they were ordered to disperse.

Urban Milwaukee interviewed individuals as they emerged from N. 6th St. and W. Capitol Dr. to walk up the ramp towards N. Port Washington Rd.

Spike strips (which can puncture tires) were used, as they had been all night to impede vehicles and control where they go. Chief Morales said Monday afternoon that the city would continue to seize vehicles from drivers.

After the march ended, Urban Milwaukee saw dozens of protesters walking south towards Downtown quietly on the sidewalk. A drive down N. Martin Luther King Jr. Dr. and through Downtown did not reveal any obvious indications of new vandalism or looting. Numerous stores on Martin Luther King Jr. Dr. were boarded up. The street was the site of a well-attended cleanup effort on Monday afternoon.

While the march was in the suburbs, vehicles were recorded doing donuts on the grass in Burns Commons and someone shattered the glass in the adjacent streetcar shelter. An unidentified officer on the suburban police radio system said a squad car had a broken rear window when the group was seeking to go north of W. Capitol Dr.

3 thoughts on “Peaceful March Ends at 3 a.m. Near Capitol Dr.”