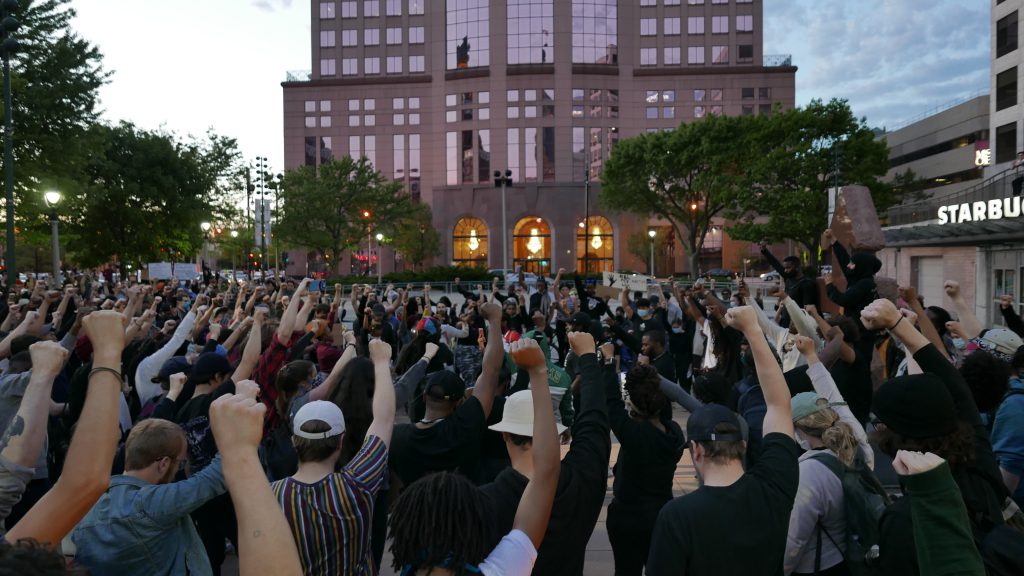 The fourth night of protests in Milwaukee against the killing of George Floyd and police brutality has so far played out peacefully.

Following three consecutive nights where unrest occurred late in the evenings and early in the morning, the organizers of the protest Monday made a point to emphasize the nonviolent nature of the action. The march carried on peacefully, with almost no police presence during the first three and a half hours of the march.

Frank Nitty, a community activist, appeared to be the lead organizer of this march, which was organized under the auspices of a brand new group he started called The New Milwaukee (peaceful protests for change).

Like Sunday, the protest began at the intersection of W. Locust St. and N. Dr. Martin Luther King Dr. in the early evening, between 5 and 6 p.m. The group started south down MLK, eventually looping around the Milwaukee County Courthouse and working its way up to North Avenue, from which it went to Holton, then to Water, eventually stopping at Red Arrow Park for a rally.

The march was made up of more than 100 protesters on foot, a couple dozen people on bikes, and many dozens of cars. There were too many protesters and cars moving in unison for Urban Milwaukee to count.

The caravan of cars appears unique to Milwaukee among the George Floyd protests occurring around the country. It appears to be an organically occurring protesting strategy that started with the earliest protest three nights ago. Whether by design or not, the massive caravan of cars makes it easy for the protesters to secure an intersection, with traffic completely blocked for at least a quarter-mile trailing behind them.

At Red Arrow Park Nitty and other organizers made a point to emphasize and encourage the peaceful nature of the march. A moment of silence was had at the park for George Floyd, the protesters encircling the organizers, heads bowed, fists in the air.

The park, in the center of downtown, is a solemn location for Milwaukee protesters organizing against police brutality. It was where Dontre Hamilton, unarmed, was shot and killed by Christopher Manney, then with the Milwaukee Police Department. Hamilton’s family lead many protests against police killings that began or ended in Red Arrow Park.

Throughout the evening, the arrival of the march was announced at every point by a cacophony of beeping car horns, different music from dozens of car stereos and chants from protesters. All this was occasionally punctuated by fireworks, sometimes lit by protesters, sometimes by bystanders.

After rallying in Red Arrow Park, the protesters moved south on Water St. It was then that police arrived for the first time in force. Several squad cars came zooming down Water going north with their lights and sirens on. 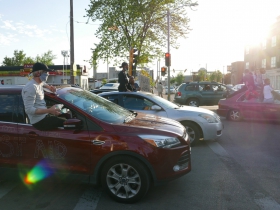 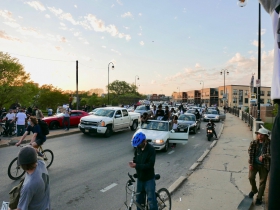 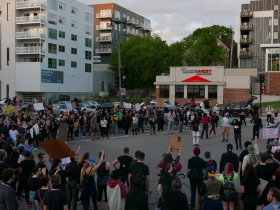 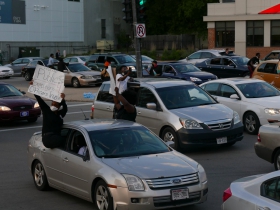 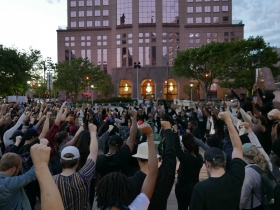 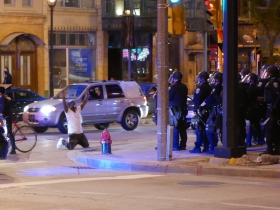