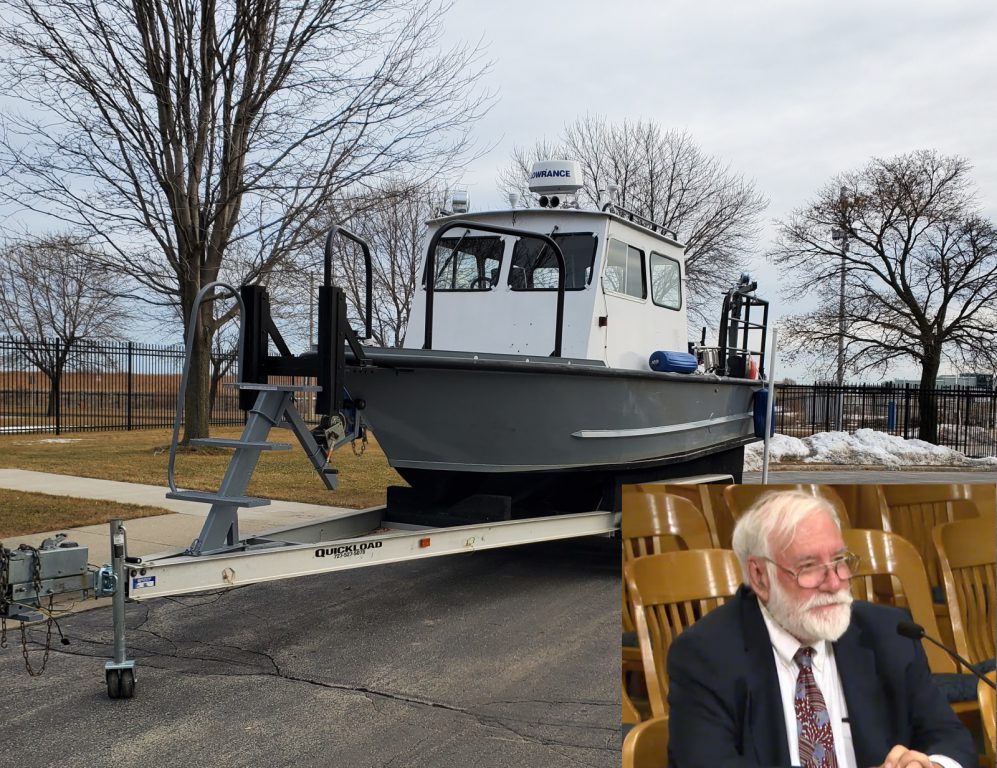 Where were you 53 years ago? For Larry Sullivan, he was starting his career with the City of Milwaukee.

That career ended last week, but it won’t soon be forgotten. Port Milwaukee, the city-run entity where Sullivan has served as the Chief Engineer since 1989, will name its surveying vessel after Sullivan.

The Larry Sullivan, as the vessel will soon be known after a vote by employees and port tenants, is a regular presence in the port’s waterways. It’s used to inspect the 467-acre port and its many structures, above and below water.

“Larry Sullivan’s commitment to excellence and passion for public service is known across Wisconsin and throughout Great Lakes region. As a colleague and friend, Larry is thoughtful, compassionate, patient and always the consummate professional,” said Port Director Adam Schlicht. “I am thrilled to honor our long-time Chief Engineer by having the Larry Sullivan surveyor join the fleet of Port Milwaukee vessels supporting the economic and ecological health of Milwaukee’s harbor and waterfront for generations to come.”

“Larry knows everything, about the port, the waterways, he personally walked on the bottom of the harbor on many occasions,” said Alderman Robert Bauman, a former Board of Harbor Commissioners member, about Sullivan in June 2019 in asking for a historical fact during a Public Works Committee meeting.

Schlicht told Urban Milwaukee that Sullivan was the longest-tenured city employee and one of the longest ever. He served under seven different port directors.

Sullivan had a front-row seat to see the effect of deindustrialization on Milwaukee, having started his career when Solvay Coke & Gas was still operating at a waterfront site at the end of E. Greenfield Ave. It spent decades as an abandoned manufacturing campus. But Sullivan served long enough to see that area reborn. Komatsu Mining will build a new manufacturing campus there, anchoring the emerging Harbor District, and the city intends to use the waterfront portion of the site as a cruise ship dock. Plenty of other change has occurred. The Milwaukee River is now lined with housing, the UW-Milwaukee School of Freshwater Science calls the harbor home and Lake Express ferry provides passenger service via the city’s harbor.

The Larry Sullivan is being outfitted with new equipment thanks to an $18,700 state grant. The new equipment will offer improvements on dockwall and side scanning, Schlicht said. Port Milwaukee offers the vessel’s services to other entities including the Milwaukee Metropolitan Sewerage District and Milwaukee County. A $29 million partnership was announced earlier this year to clean up the area’s waterways. A $31.4 million project is also underway to develop an agricultural export facility in the port.

The Larry Sullivan isn’t the only piece of port equipment named after a former employee. The port’s tugboat, known as Joey D, is named after longtime harbormaster Joe Digiorgio who passed away in March 2010. Two large cranes, Big Henry and Big John, are named after former mayors Henry Maier and John Norquist.

Brian Kasprzyk, currently the Field Engineer at the port, will replace Sullivan as Chief Engineer. Sullivan is working as a part-time engineering consultant for the port now and could end up captaining his namesake vessel.

The 20-foot-long boat, a Monark 20 model, was originally owned by the National Park Service and known as the Tobin H.