Refusal of Vos and Fitzgerald to postpone election could cause more disease, deaths.

No sooner was Tony Evers elected in November 2018 than the two Republican legislators, Assembly Speaker Robin Vos and Senate Majority Leader Scott Fitzgerald, were planning with lame duck Governor Scott Walker to protect Republican power. That included a plan to move the April 2020 election for Wisconsin Supreme Court to a different date because they feared a big turnout in the Democratic presidential primary would defeat conservative Supreme Court Justice Dan Kelly.

As it turns out, there isn’t much of a race left in that presidential primary: Bernie Sanders has almost no chance of forestalling Joe Biden’s surprisingly powerful march to the nomination. But there is still ample reason for Republicans to fear Kelly will be defeated by liberal Jill Karofsky. She has a huge lead in campaign funding, a 23-to-1 lead in outside campaign funding and a significant lead in special interest funding.

So anything that might depress the urban turnout is a good thing. And the pandemic has been surging in Milwaukee and Dane counties, the two Democratic power bases, while there are 24 counties that still have not seen one case of COVID-19. That will certainly depress in-person voting in Milwaukee and Madison, which could help Kelly win, despite his huge disadvantage in campaign dollars.

“We’re putting people in an impossible situation, where they have to choose whether to vote or protect their health,” Assembly Minority Leader, Rep. Gordon Hintz (D-Oshkosh) charges, in an interview with Urban Milwaukee.

More than 225 local leaders have written a letter to Gov. Evers saying the state isn’t doing enough to safeguard potential voters. Evers has called for a mail-in election only to prevent the spread of disease through in-person voting. But the elections commission cannot possible get enough ballots to all voters who’ve requested them in time for the April 7 election, as it has noted in a memo released to the media. Mayor Tom Barrett and other urban political leaders have called for a delay in the election to allow enough time for a mail-in only election to be conducted.

Evers has said he believes the governor lacks the power under the state Constitution to move back the election. Hintz says Democrats checked with the non-partisan Legislature Reference Bureau, which advised that only the Legislature has that power. And that leaves it up to Vos and Fitzgerald, who rule a gerrymandered Legislature that fell well short of a majority of the state-wide vote in the last election.

And Vos and Fitzgerald refuse to postpone the election or discuss any alternatives. “Republicans have made it impossible to consider any proposals to improve the safety of this election and ensure every vote is counted,” says Senate Minority Leader Jennifer Shilling (D-La Crosse), in a comment to Urban Milwaukee.

“They have cynically calculated that lower turnout will help the conservative candidate,” Jay Heck, executive director of Common Cause in Wisconsin, told the Washington Post. “Wisconsin is the only one of the 11 states originally scheduled to hold contests in April that has not postponed or dramatically altered voting amid the pandemic,” the Post reports.

Why are Vos and Fitzgerald leaving Wisconsin an island amid a nation moving to protect voters? They did not respond to requests for comment from the Post or from Urban Milwaukee.

Meanwhile, the pandemic is spreading and worrying people even in counties that haven’t yet seen a COVID-19 case. The Wisconsin Elections Commission surveyed local clerks across the state and found 111 municipalities are short 671 poll workers, leaving them too short of workers to handle even one polling place. “Another 126 municipalities are short 2,713 poll workers, leaving them unable to staff all their polling sites,” as an AP story noted. 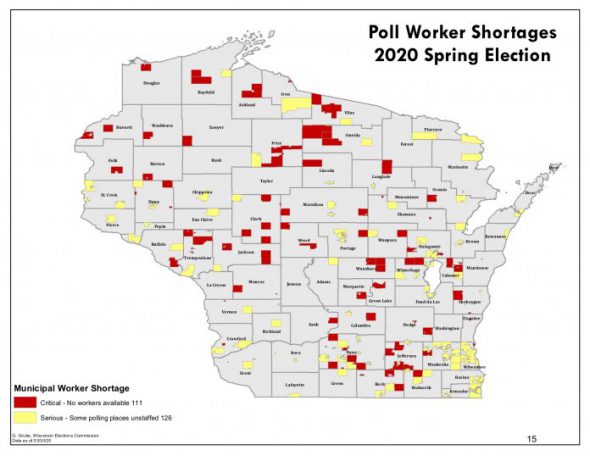 From the Wisconsin Elections Commission.

All told, more than 60 percent of municipalities lack enough poll workers and are short by nearly 7,000 poll workers. The election commission created a color coded map of the polling places short of workers and “it is everywhere,” says commission member (a Democratic appointee) and Milwaukee attorney Ann Jacobs in an interview with Urban Milwaukee. “There are red dots [denoting shortages] across the state. It is an equal opportunity problem.”

That includes a key Republican-leaning city, Waukesha, which has so few poll workers it will have just one polling place rather than 15, meaning workers in that polling place must maintain some 15 polling books, and maybe double that since a polling place often serves more than one ward. This could result in a very slow election and long lines, Jacobs says.

You might wonder why Republicans would want this, but keep in mind this in the city of Waukesha, which leans Republican, but has many Democratic voters. The rest of Waukesha County is overwhelmingly Republican and is made up of smaller suburbs and rural areas that may see far less impact from the problem.

Republicans like elections commission member Dean Knudson have said the election is needed “in order to maintain continuity of local government.” But would it really be that big a problem to postpone the election a few weeks to make sure all mailed-in ballots can be sent out, returned and processed?

The only comment from Vos or Fitzgerald came about a week ago, with Fitzgerald saying it could be confusing to move back the election. Hintz agrees it’s a problem. “It would be a nightmare administratively to postpone the election,” he says. “But it will be a nightmare for public health to hold it.”

There is a reason every state with an April election has postponed it. For starters, there simply isn’t time to get absentee ballots printed, sent to voters who have requested them and then received back and processed in time for an April 7 election. Milwaukee Attorney Mark Thomsen, a Democratic appointee to the elections commission, says the result will be that many absentee voters, if not the majority, are not counted in time for the election. “And that would be a historic failure for the State of Wisconsin.”

But it gets worse. Jacobs notes that the elections commission has sent out detailed instructions on how local polling places should operate to reduce human contact as much as possible. “It’s extremely complicated and time consuming,” she says, and will make the election run very slowly and result in long lines — and likely further depress turnout.

But most importantly, holding an in-person election violates the state quarantine and means more people will be exposed to a disease that could kill them.

“Are we maintaining a quarantine where no more than 10 people can gather or not?” Hintz asks. He points to Waukesha, where collapsing 30 polling places into one may end up increasing human contact. “Conditions are ripe for a virus.”

“I am so concerned people will come down with COVID-19 because they are poll workers or because they went to vote,” Jacobs says.

There is still a federal court case pending, where groups like the League of Women Voters have asked to postpone the election. But if that fails, it will be up to Vos and Fitzgerald to protect this state’s voters.