SUV Driver Runs Into The Hop 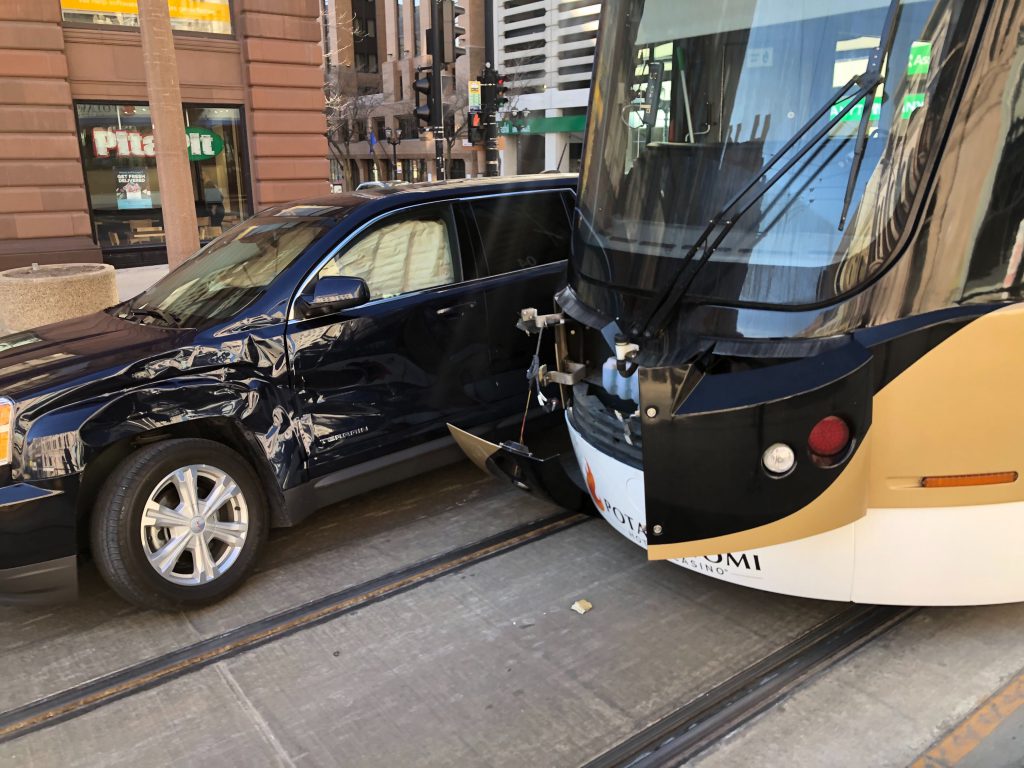 An SUV that collided with The Hop. Photo by Jeramey Jannene.

A moving vehicle has collided with The Hop for the first time.

A driver of a GMC Terrain sport utility vehicle (SUV) collided with The Hop around 1:50 p.m. near the intersection of E. Wisconsin Ave. and N. Broadway. The driver was heading east on Wisconsin and attempting to turn south onto N. Broadway but left his travel lane, veering into the second travel lane and the oncoming streetcar vehicle.

The driver, still at the scene, told Urban Milwaukee he did not see the 67-foot-long, 83,000-pound streetcar and had swerved to avoid another vehicle. A Lyft transportation network company sticker was visible in the SUV’s windshield.

The SUV had extensive damage and an interior airbag had deployed. A panel for the streetcar was spotted dangling near the vehicle off its hinges, but the only other visible damage appeared cosmetic.

The Milwaukee Police Department was on the scene, as were streetcar operations employees from Transdev. Service on the system was suspended as a result of the collision.

The incident comes one week after the system recorded its one-millionth ride. Ridership on the system continues to exceed engineering estimates.

The streetcar was first struck by a car on October 9th, 2018, less than a month before passenger service began. An automobile driver opened a passenger door in front of a streetcar vehicle on N. Jackson St., causing minor damage to both vehicles. A similar incident happened later that month.

“Around 1:45 p.m. an eastbound SUV traveling on Wisconsin Avenue ran a red light driving into the path of streetcar #4. No passengers appeared to be injured and all safely deboarded. The SUV driver stayed on scene and was issued a citation by MPD. Streetcar #4 returned to the maintenance facility under its own power for safety evaluation and repair. The accident was cleared and full service was restored by 3:15 p.m.,” said a Department of Public Works spokesperson in a statement.

A reader at the scene informed Urban Milwaukee that both vehicles were gone from the site of the crash by 2:45 p.m.

The system has resumed service. 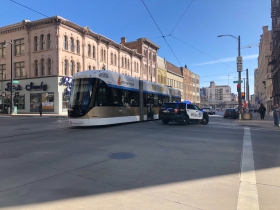 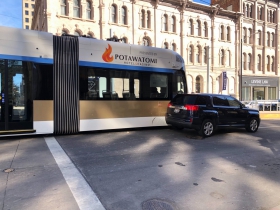 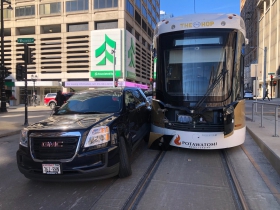 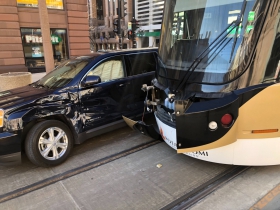 2 thoughts on “Transportation: SUV Driver Runs Into The Hop”