The Huron Rises Above

New office building is now taller than its historic neighbors. 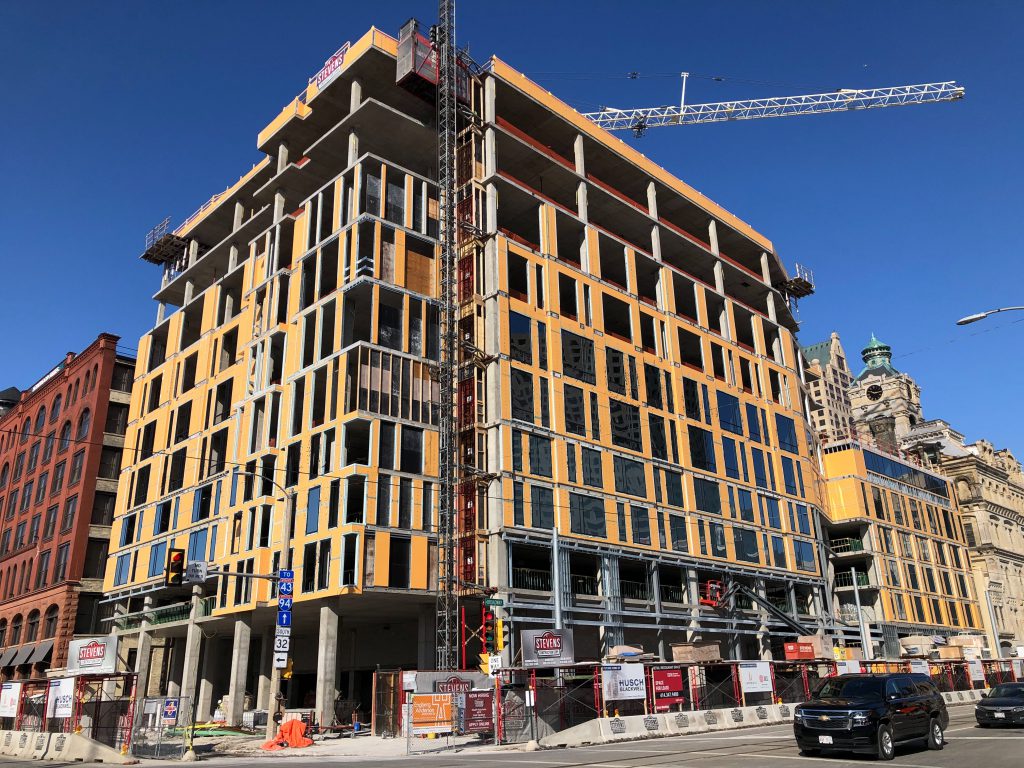 Downtown’s newest office building is now rising above its neighbors in the East Side Commercial Historic District.

The Huron Building, 511 N. Broadway, will be home to law firm Husch Blackwell when it opens later this year.

J. Jeffers & Co. is developing the 11-story building, which will not only link a number of projects along E. Clybourn St., but help tie the Historic Third Ward to East Town. A streetscaping project, funded by increased tax revenue from the development, will further enhance the connection with lighting under Interstate 794.

The law firm will lease 71,000 square feet for 180 employees in the building. Its office space will be built with a variety of “me” and “we” spaces, intended to balance the need for private offices with a growing push for spaces for collaboration in modern office layouts. The firm, headquartered in Kansas City, believes the office design will be an asset in its future recruitment efforts.

Although its an entirely new building, the project required vetting by the Historic Preservation Commission because it is located within the East Side Commercial Historic District. The commissioners and project architect Engberg Anderson Architects took special care to make sure the materials and height of the building lined up to the adjacent Mackie Building, an earlier project of Jeffers. The massing was also kept in line with the Button Block building, now a Homewood Suites hotel, immediately west of the Huron.

Stone in the building’s facade will come from the same quarry in Ohio that provided stone for the construction of the adjacent Mackie Building. Jeffers redeveloped that building, with the Grain Exchange event space as an anchor, into apartments and a small amount of office space in 2017. While it’s yet to be installed, we can now see that the Huron Building is taller than all but the ornamental clock tower atop the Mackie Building.

Construction on the project is being led by Stevens Construction, which can use the project and its work on the neighboring hotel complex as a billboard for Madison-based company’s growing Milwaukee presence.

The five lower floors of the building are shorter than those because they will be used for parking and street-level commercial space, while the six upper floors will contain office space.

Joshua Jeffers raised $14 million from more than 400 investors for this project, including $10 million in the first 80 minutes on crowdfunding platform CrowdStreet. The project relies on $21 million in equity. Associated Bank is serving as the primary lender.

The building is scheduled to open this summer. 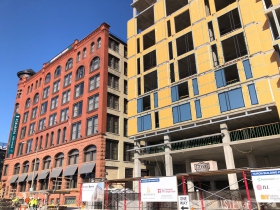 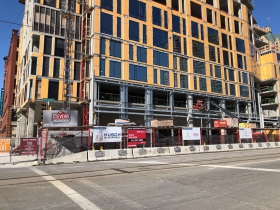 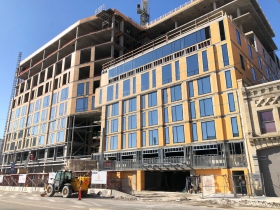 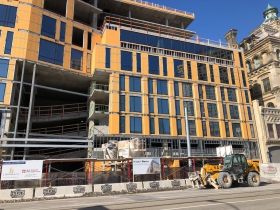 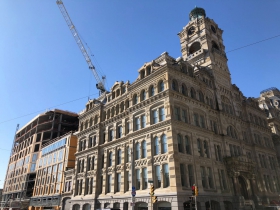 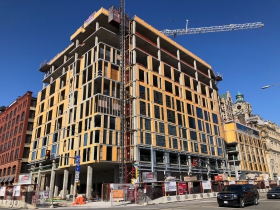