A new apartment building is planned for a vacant lot at 3317-3349 N. Martin Luther King Jr. Dr. near the Five Points intersection.

The Department of City Development has selected a partnership of the Martin Luther King Economic Development Corp. (MLKEDC) and KG Development to develop the 1.13-acre, city-owned site.

A courtyard and 2,400-square-foot banquet room would be constructed atop an attached one-story parking garage at the rear of the building. Renderings depict a basketball court and playground at ground level behind the building.

The city, through the Redevelopment Authority of the City of Milwaukee, has owned the site for decades according to assessment records. But the land has recently gained a higher profile following Bader Philanthropies redevelopment of a former theater into its headquarters. The organization is also redeveloping an adjacent former bank into a home for a cafe and wellness center and has contributed $1 million to Milwaukee Habitat for Humanity to build 40 homes in the area.

The MLKEDC, now led by Nicole Robbins, has developed a number of buildings in the area. The non-profit developed three apartment buildings, known as King Drive Commons, under former leader Welford Sanders in addition to scattered-site housing and a commercial building. Under interim director Leo Ries it completed the Welford Sanders Lofts in 2018, three years after Sanders passed away from an undisclosed illness.

The MLKEDC did not respond to a request for comment by the time of publication.

KG Development is a partnership between Anthony Kazee and Jamie Gray. The partners are working with Workshop Architects and DreamBuilders on the building’s design.

The city issued a request for proposals (RFP) for the site in the fall and reviewed proposals from four respondents. An asking price of $98,000 was included in the RFP.

A design charette was conducted for the Five Points area in 2017, but the vacant site was not one of the six sites contemplated.

The land sale, consisting of five adjoining parcels, will require Common Council approval. A file has yet to be introduced.

Have a vision for Harambee? The city is selling a number of other properties in the neighborhood. 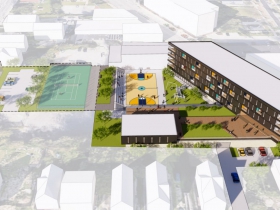 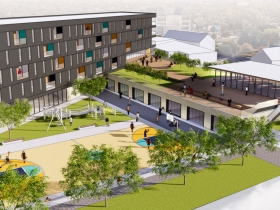 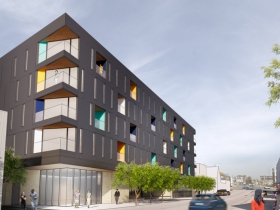 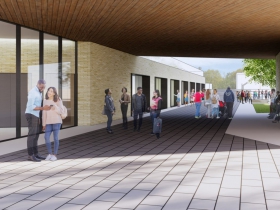 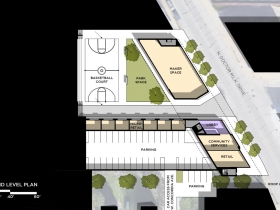 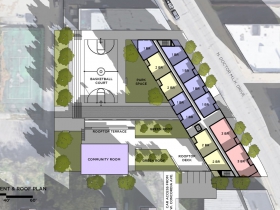 One thought on “Eyes on Milwaukee: Apartment Building Planned for King Drive”