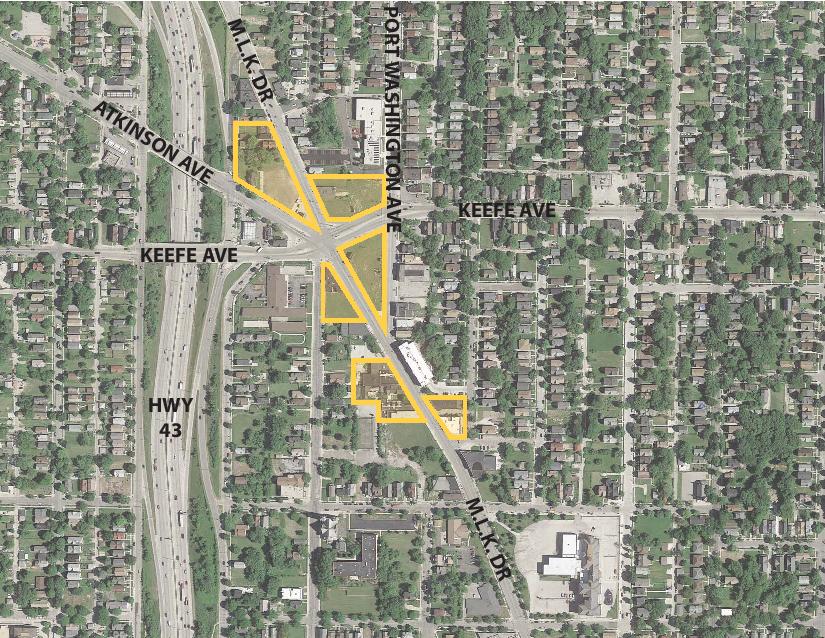 The city will convene an intensive planning session to discuss the future of the area surrounding the intersection of N. Dr. Martin Luther King Dr., W. Keefe Ave., W. Atkinson Ave., and N. Port Washington Ave. in the city’s Harambee neighborhood. The planning session, known as a charette, is the ninth in a series conducted by the city in partnership with the UW-Milwaukee School of Architecture & Urban Planning. The charette will focus on six key properties in the Five Points area.

Janet Grau, a senior planner with the Department of City Development, appeared before the Common Council’s Zoning, Neighborhoods & Development Committee Tuesday morning to explain the project. Grau stated that “this is a critical juncture. This is a critical focal point for the Harambee neighborhood, it’s also the intersection that leads to Riverworks, it also is an extension of the King Drive [business improvement district] and a transit corridor that runs from the Grand Avenue Mall to Glendale.” Grau said the charette will bring together design professionals, real estate professionals, property owners and stakeholders to discuss what she described as “realistic development scenarios.”

The King Drive BID executive director, former DCD employee Deshea Agee, also spoke in favor of the charette at the committee. While the King Drive BID borders do not reach the Five Points intersection, the area does serve as a gateway to the heart of N. Dr. Martin Luther King Dr. Agee noted that this is actually the third charette for the area, following the June 2013 MLK Drive charette and December 2013 Bronzeville charette.

Those past area charettes were successful, according to committee member and area alderwoman Milele A. Coggs. She noted that the projects coming to those areas now draw elements of their design and use from what was envisioned at the charettes.

Citing the Bader Philanthropies headquarters that recently broke ground near Five Points, the alderwoman endorsed the charete stating  “It just makes sense at this moment in time, the synergy is right.” Coggs noted that she grew up near the intersection.

The city’s Zoning, Neighborhoods & Development Committee unanimously approved the transfer of $10,000 from the city’s Capital Improvements – Advanced Planning Fund into a subaccount to host the event.

A firm date for the event has not yet been finalized. According to Department of City Development spokesperson Jeff Fleming, the event will happen in early- to mid-September.

One thought on “Eyes on Milwaukee: Charette to Plan Harambee’s Future”