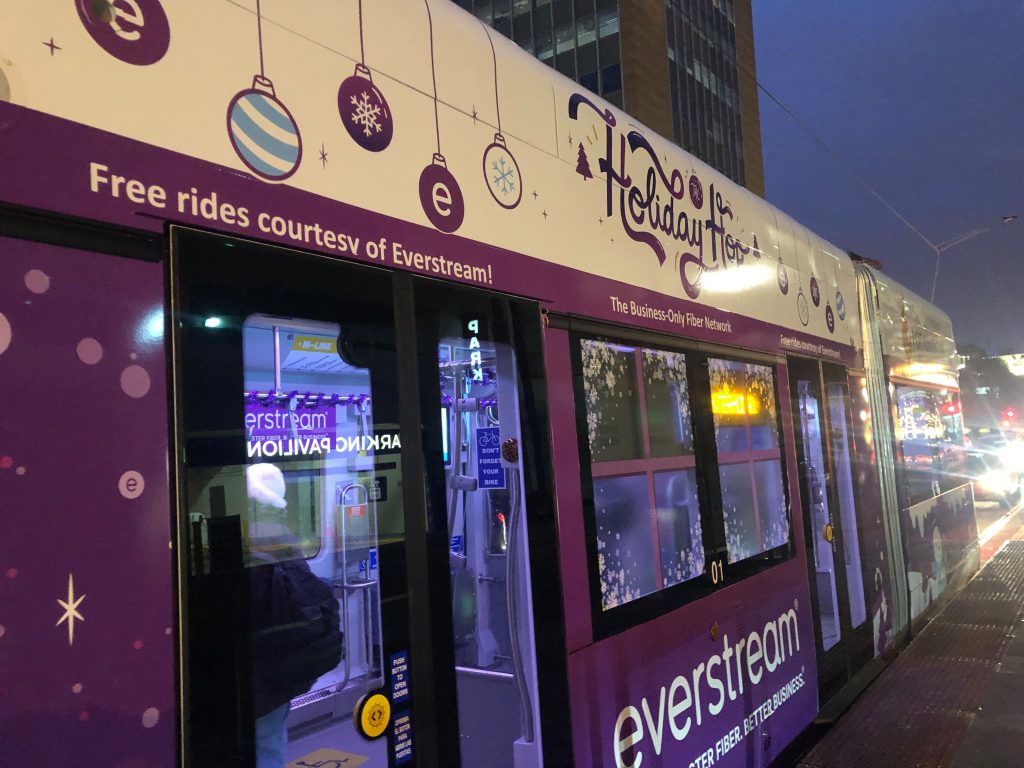 City and Everstream officials joined Santa Thursday afternoon to celebrate the launch of a “Holiday Hop” branded streetcar for the holidays.

One of The Hop’s five vehicles has been rebranded as part of a $90,000 partnership with business-only fiber network services Everstream.

The streetcar, which still carries marketing for presenting sponsor Potawatomi Hotel & Casino, has been temporarily reclad in purple to match Everstream’s color scheme. The vehicle, which is branded “Happy Holidays,” on the outside alongside Everstream’s tagline “faster fiber. better business” slogan, has a series of holiday motifs on the interior including images of presents, ornaments and elves.

The move mirrors the Milwaukee Bucks sponsorship of a streetcar in the spring. Terms of that deal were not disclosed.

Santa joined the ride with Department of Public Works Commissioner Jeff Polenske, Everstream CEO Brett Lindsey and a host of Everstream employees to greet passengers on their way to the city’s tree lighting ceremony outside City Hall.

The Cleveland-based company recently opened a Milwaukee office in the Wells Building at 324 E. Wisconsin Ave. and anticipates investing $27 million in the Milwaukee market over the next year. The building plays a pivotal role in the region’s telephone and internet networks as the only “carrier hotel” in the area where different providers’ systems interconnect.

The company will turn on two new fiber rings measuring 172 miles, providing high-speed internet service to customers located between downtown Milwaukee and the western suburbs. Businesses near the line can connect to the fiber network to obtain fast internet connectivity. The company plans to deploy a 560-mile network throughout the region by the end of 2020.

According to a map on the company’s website, Everstream provides its high-speed service in Ohio, Michigan, Illinois and Wisconsin. Lindsey said the firm would soon open additional officials in Wisconsin

“The Hop is providing the community with connectivity for buildings all around Downtown, and we’re excited to do that with our private business network,” said Lindsey at The Hop’s one-year anniversary celebration at City Hall on November 1st.

A procurement process is ongoing for a kiosk system with real-time arrival data and advertising at each station. City officials estimated that revenue from the kiosks would allow the system to be maintained as free in its current state.

The city’s 2020 budget, which will be formally adopted next week, includes $4.65 million for streetcar operations, including the lakefront line extension, with funding coming from a federal operating grant ($3.5 million), Potawatomi ($781,000) and advertising ($368,000).

If you want to hop aboard the special Hop vehicle, the easiest way to find it is to use the mobile application. The Everstream vehicle is numbered “Bus 1” in the system. Clicking on any of the vehicles on the route map in the smartphone app will display the vehicle number as well as its estimated arrival time at upcoming stations. 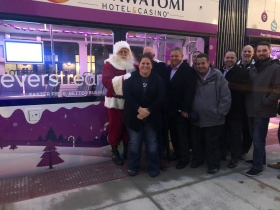 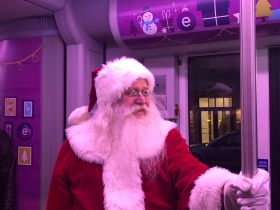 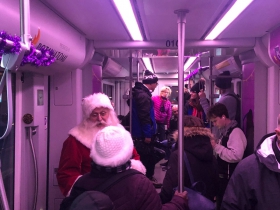 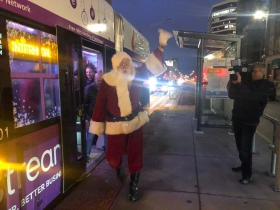 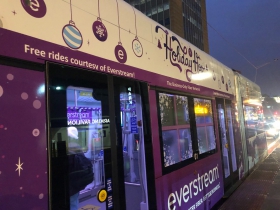 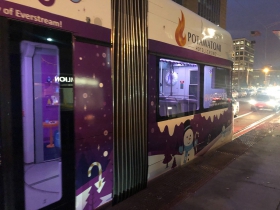