The Brewery Celebrates Its Completion 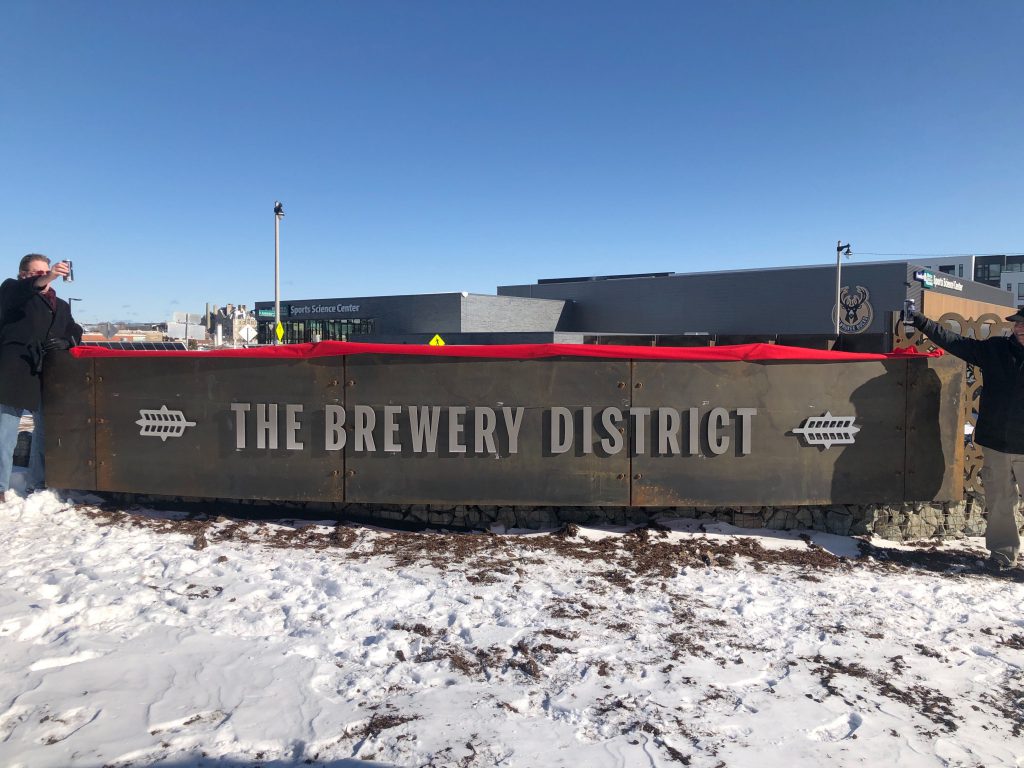 Gateway Sculpture at The Brewery. Photo by Jeramey Jannene.

It’s The Brewery District Day throughout all of Milwaukee by order of Mayor Tom Barrett.

Barrett, joined by leaders from master developer Zilber Ltd. and other project partners, made the proclamation at a brief ceremony held Tuesday morning at the Hyatt Place hotel to celebrate substantial completion of the redevelopment of the former Pabst Brewery and the installation of a new gateway landmark on the district’s eastern edge.

“This is a culmination of Joe’s vision,” said Zilber president John Kersey of the late Joseph Zilber. The developer approached Barrett in 2006 with a proposal to transform the abandoned brewery into a mixed-use neighborhood. Zilber’s proposal came as options for the 21-acre district were dwindling following the rejection of a heavily-subsidized entertainment center known as Pabst City.

“None of this would have happened without the help from the city,” said Kersey. The city, through a tax-incremental financing district, has contributed $29 million to support public infrastructure, demolition, and historic preservation. In turn, Zilber has stewarded the development from a district assessed at $9 million in 2006 to $104 million at the end of 2018.

“We did it by letting the public tell us what needed to be here,” said Kersey. He then ticked off all the various uses that have found a home, including senior, affordable, student and market-rate apartments, office space, a hotel, two parks, multiple event venues and a number of other uses. “For some odd reason two breweries came back,” said Kersey of Pabst and Milwaukee Brewing Co.

“I think what we have witnessed here is the city reinventing itself, more specifically a neighborhood reinventing itself,” said Barrett. He said he couldn’t believe the transformation that started with a simple phone call from Zilber.

With the speeches over, and the guests watching from the warmth of the hotel’s lobby, employees of marketing firm Water Street Creative uncovered the new circular gateway sculpture in the middle of the roundabout connecting W. Juneau Ave. and W. Winnebago St. at the east end of the neighborhood.

The new steel sculpture, designed by Eppstein Uhen Architects and fabricated by Ascend Design, includes signage welcoming visitors to The Brewery, matching other signage previously designed and fabricated by Ascend. It also includes a lattice component designed by Ascend with a subtle “B” design element complete with hop leaf that references both the neighborhood’s current name and Pabst’s prior name: Best and Company. Solar panels in the interior of the piece will be used to power lighting on the signage. A few final touches and more landscaping will be completed in the coming months. The only thing missing is a blue ribbon, and the sculpture that was briefly in the roundabout (more on that in the next section).

Guests were treated to free beer from both Pabst and Milwaukee Brewing Co. following the unveiling as well as music from the Polka Kings.

The sculpture, alongside the two parks, will be maintained by The Brewery Neighborhood Improvement District.

Only two major projects remain in the area. The Malt House Apartments, a historic redevelopment that ran into contracting and financial issues is scheduled to be completed in March. The silos still await a tenant “Like everything, we are looking for talented people with good ideas,” said Zilber’s Dan McCarthy. 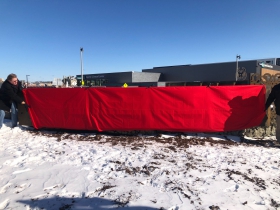 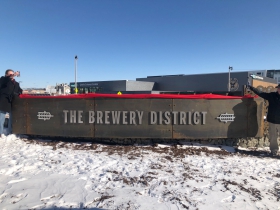 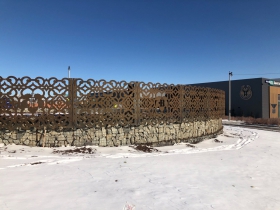 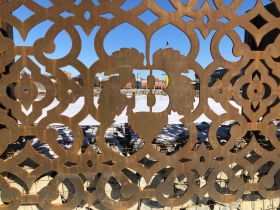 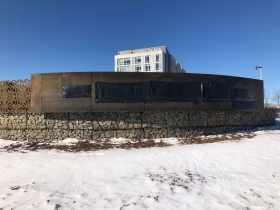 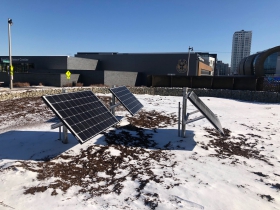 What Happened to the Old Sculpture?

You might remember the large sculpture that occupied the site for less than five years. It was a 16-foot-tall beer tapper designed by Milwaukee Blacksmith.

Kent Knapp of Milwaukee Blacksmith led the tapper’s design and construction, but the piece ultimately became property of the city.

“We need a signature piece and we need your help,” said Alderman Michael Murphy in an appearance on the History Channel’s Milwaukee Blacksmith show. “We want to make this a showcase entrance,” said Barrett.

“It will take an atomic bomb to knock this over,” said Knapp during the episode on the piece’s fabrication. Installed in 2016, it took only a small crew to remove the piece.

If you want to see the tapper today, you’re going to have to apply for a job with the Department of Public Works. The sculpture is now in storage, one of a handful of pieces of art that the department holds in its warehouses.